Pastor Matt was gracious in accommodating the wishes of four of us to be baptized this morning. While we all understand that Baptism can be performed anywhere, the idea of declaring your beliefs in the Jordan hold a special value. So Peggy, Sharon, Dick and I donned our rental robes along with Pastor Matt to perform the brief ceremony. Brief though it was, the journey there was a long one. Peggy and I had been baptized as infants and have dutifully renewed our vows hundreds of times. Today was different as it was for Sharon and Dick who had been baptized as children. So we braved the myriad little nibbling fish and kept an eye out for the famous Jordan River musk rats, and made our statement of faith. This was just the beginning of an extraordinary day. 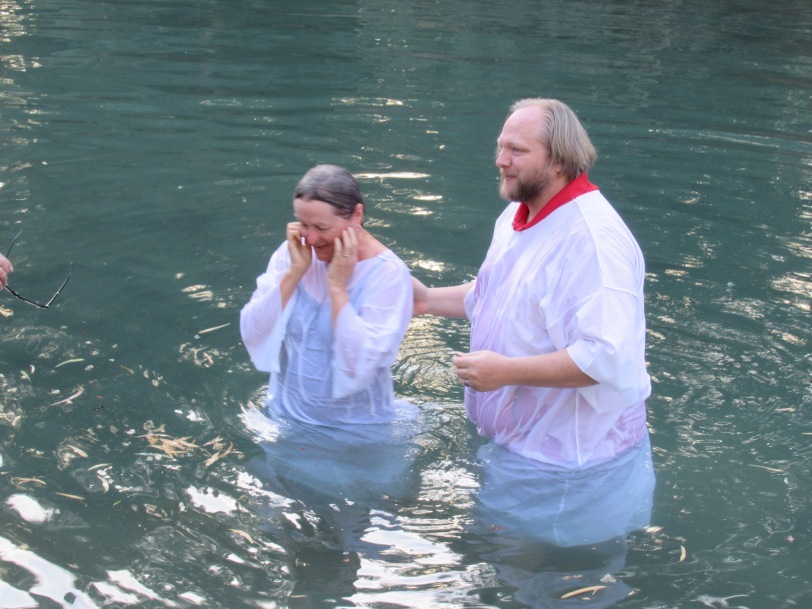 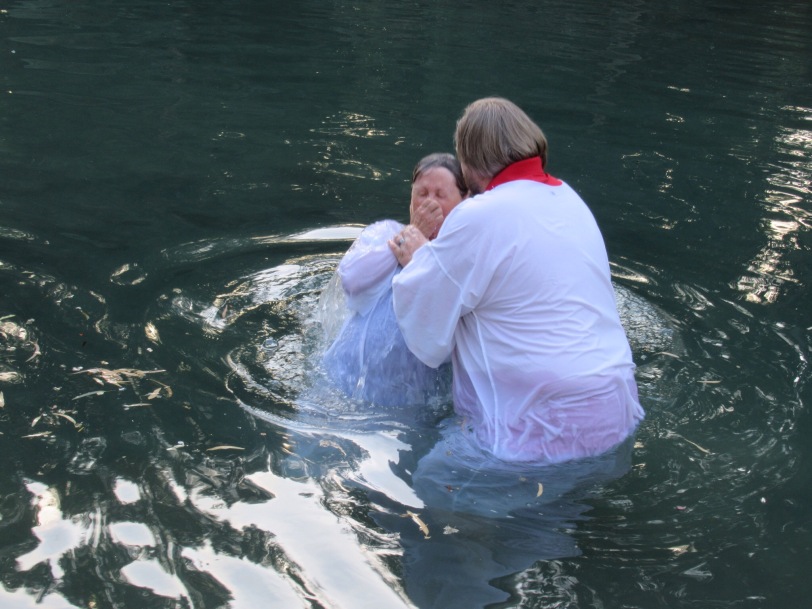 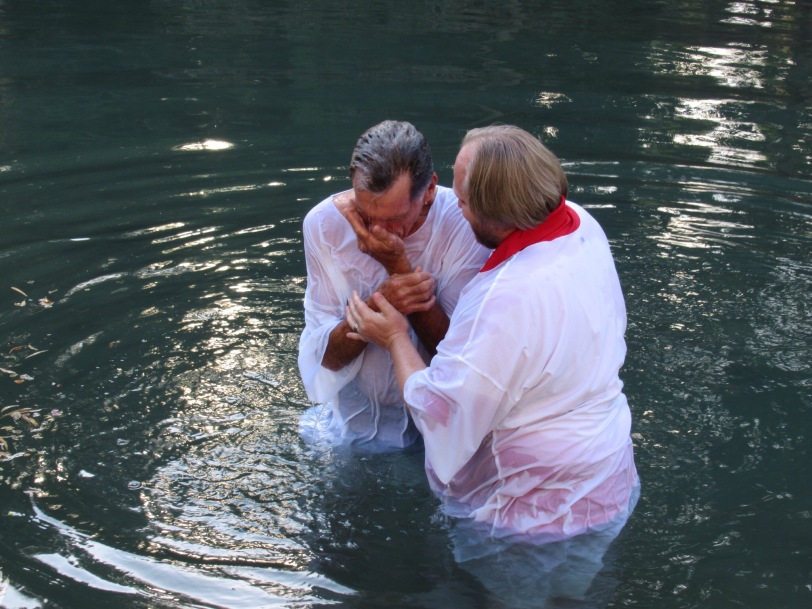 We drove north along the western shore of the Galilee until we reached one of the sites for the Sermon on the Mount. No one knows for sure the actual location and this one has been in the running since the 4th Century. It really doesn’t matter as the message is for all time and all places. The grounds are manicured perfectly but the first century crowd of rustics dressed in homespun had to be a great contrast. Nonetheless, the owners of the site have prevented the hillside from becoming a cluster of condos. We found a shady spot and read the sermon along with a discussion about the conditions faced by the poor so long ago 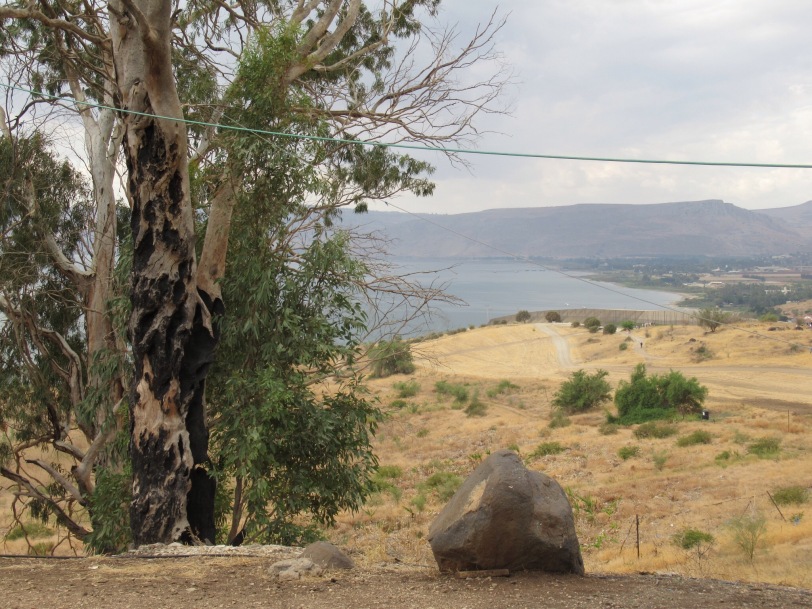 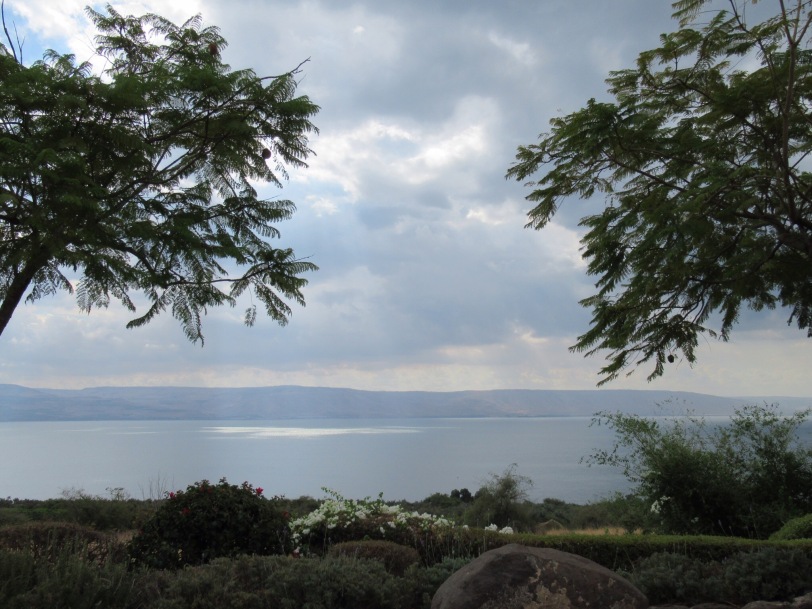 The Church of the Multiplication honors Jesus feeding the five thousand with a couple of fish and a few loaves of bread. The site has been celebrated for a very long time but it is an unlikely location. The actual site was closer to Bethsaida. No matter, the ancient mosaics were impressive along with the rock where the bread was broken were understated and appropriate. We seemed to be one step ahead of most of the tour buses. It is not that they are not entitled to the same enjoyment as us, it is just nicer for us to have a moment of two of contemplation before the selfie sticks arrive. 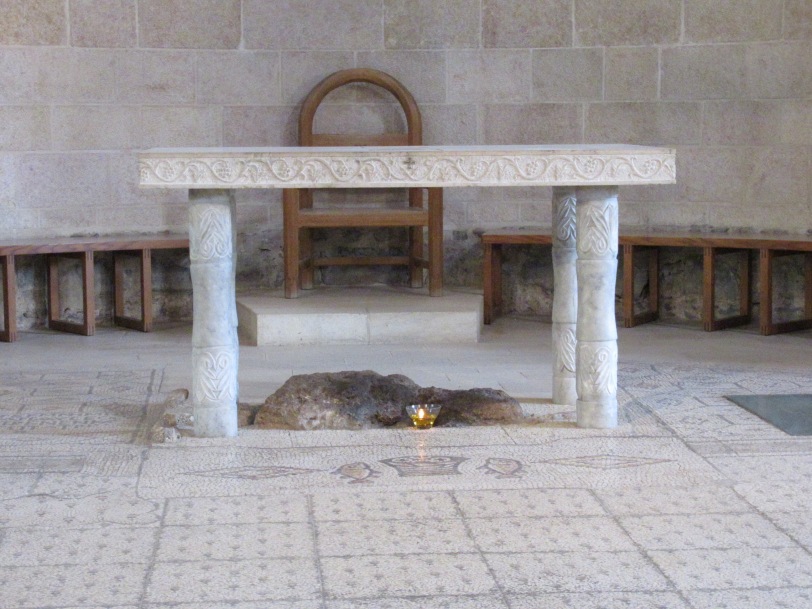 A few feet away lay the Church of the Primacy. It is a big deal for Roman Catholics as it positions The Bishop of Rome, Peter in pole position for leadership of the church on earth. At least that is the Catholic position. It is one of my favorite sites for its simplicity and location at the harbor of ancient Capernaum. The “table of Christ” where he prepared a meal for his Apostles after his resurrection was timeless and perfect even if he never actually used it. It was here that Matt performed his second shepardly duty of the day and renewed the marriage vows of the travelers. The simple service amongst the rocks and pebbles on the Sea of Galilee was moving. 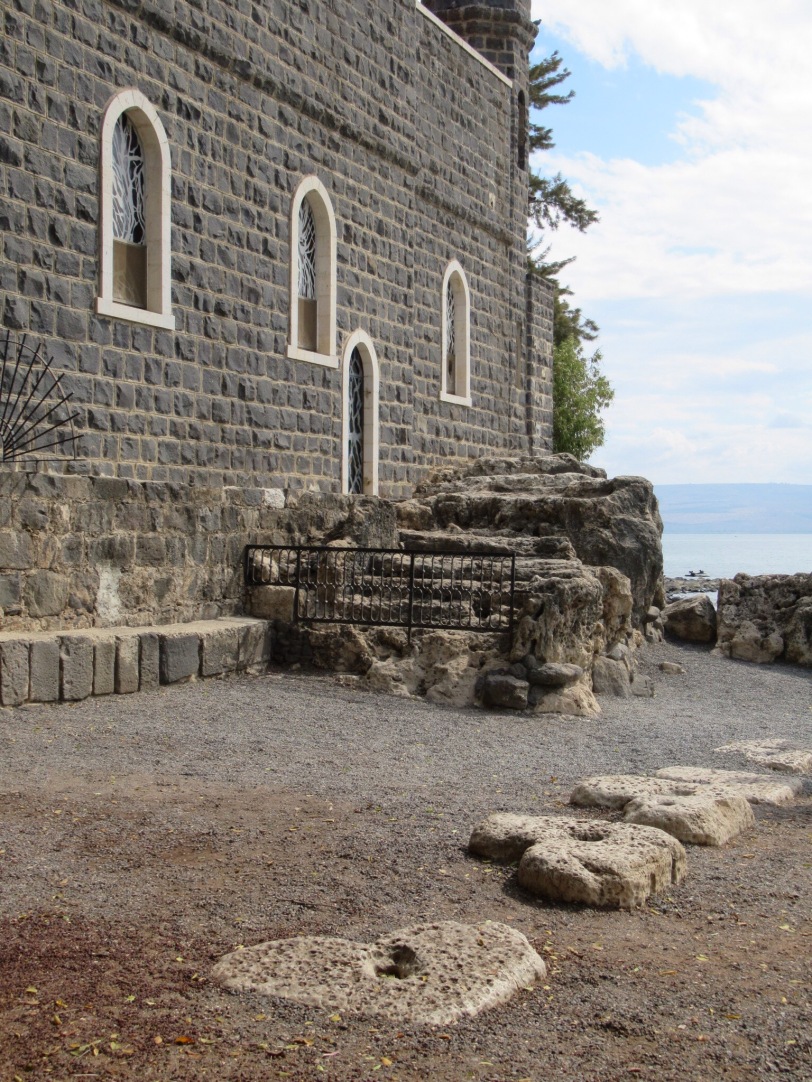 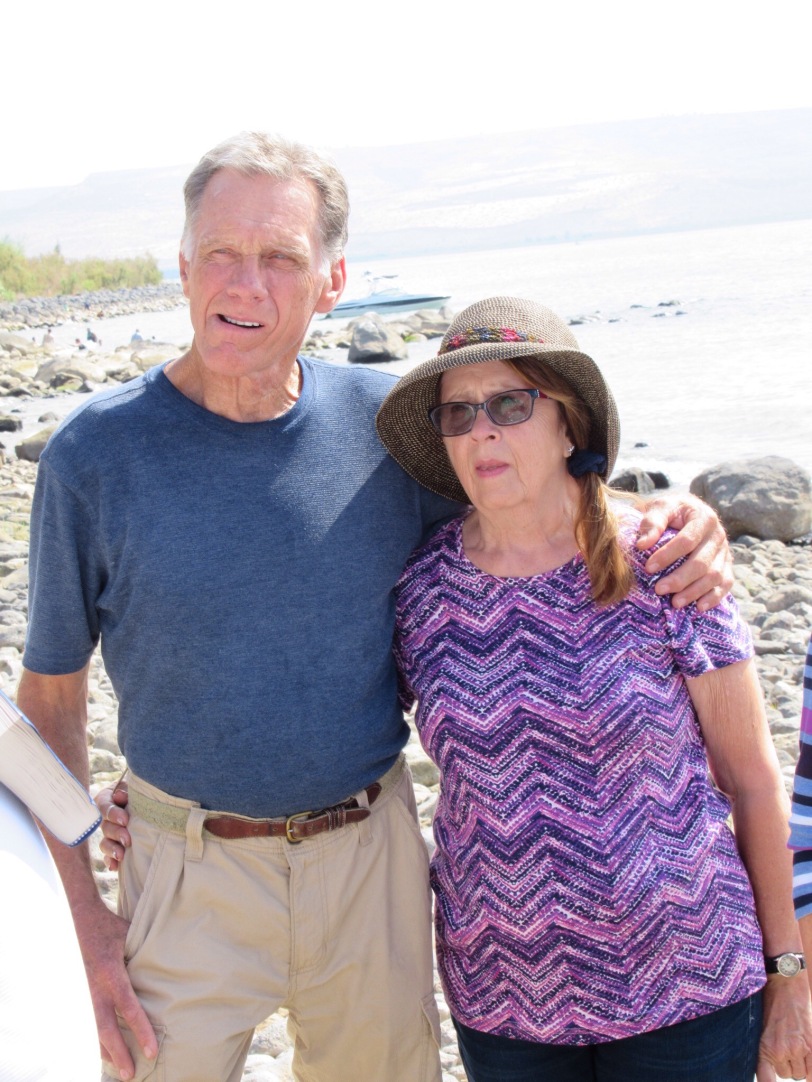 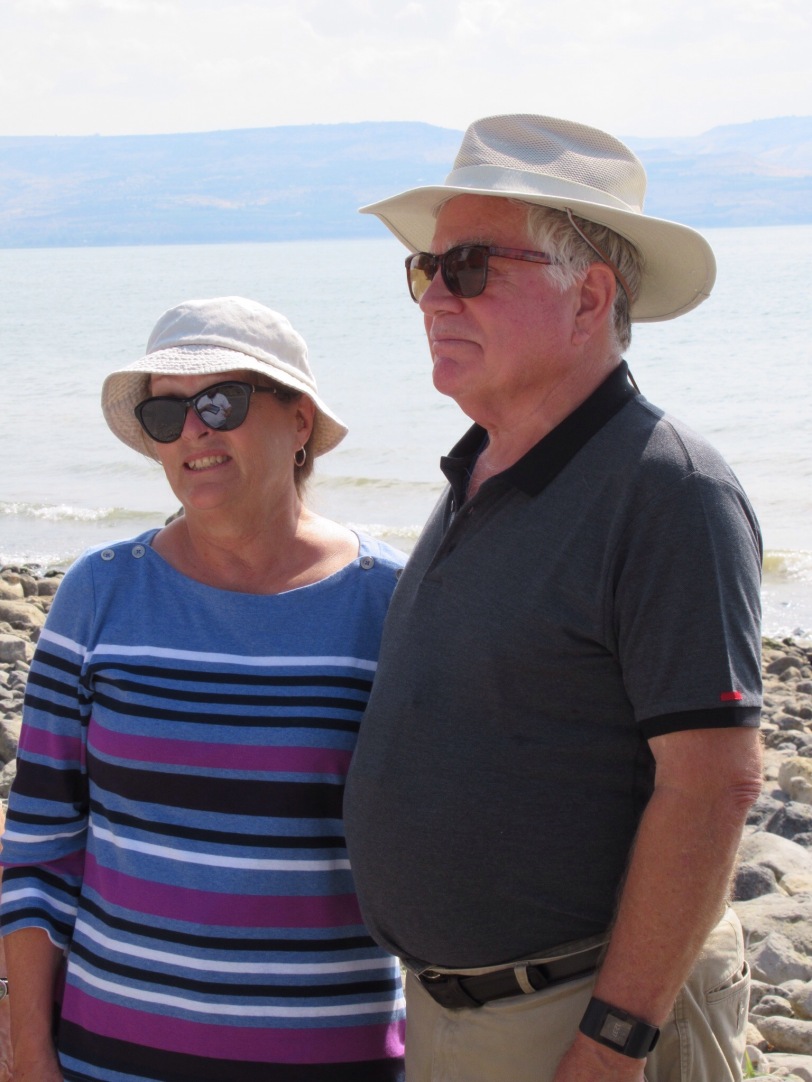 Capernaum, a mile down the road is where Jesus would headquarter for half of his three year earthly ministry. The centerpiece is the Synagogue which was built in the 4th Century atop the first century building where Jesus attended and taught. The house of Peter’s mother in law is near the entrance to the church as is covered by “space ship” looking modern church. The glass for in the church above looks down into what was likely one of the earliest house churches in Christianity. We also chose to talk and read on the shoreline away from the grounds. It was a wonderful feeling and sight. Of course, we know the choice of Capernaum by Christ was not an accident. It lie astride the main highway between the coast and Mesopotamia as well as on the dividing line between Jew and Gentile. Jesus could be amongst the Gentiles or the local Jewish population depending on his purpose. Again, things are fitting together. 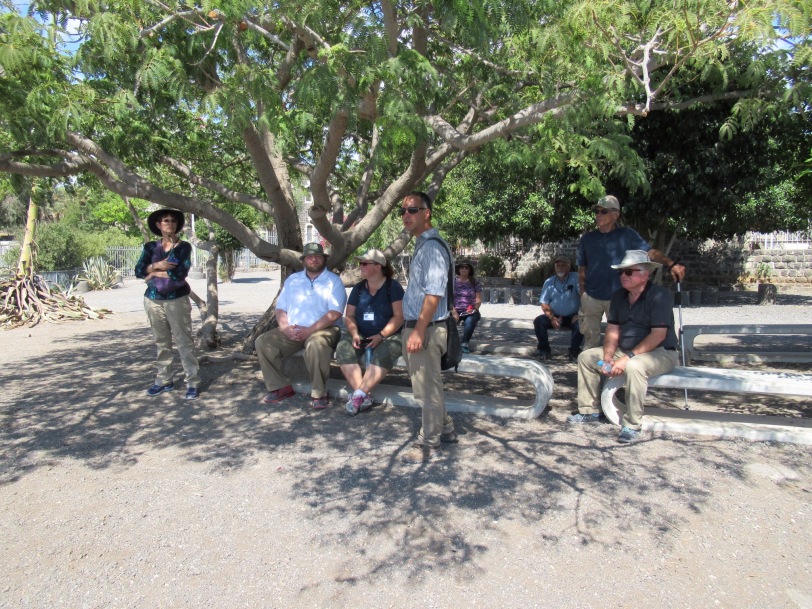 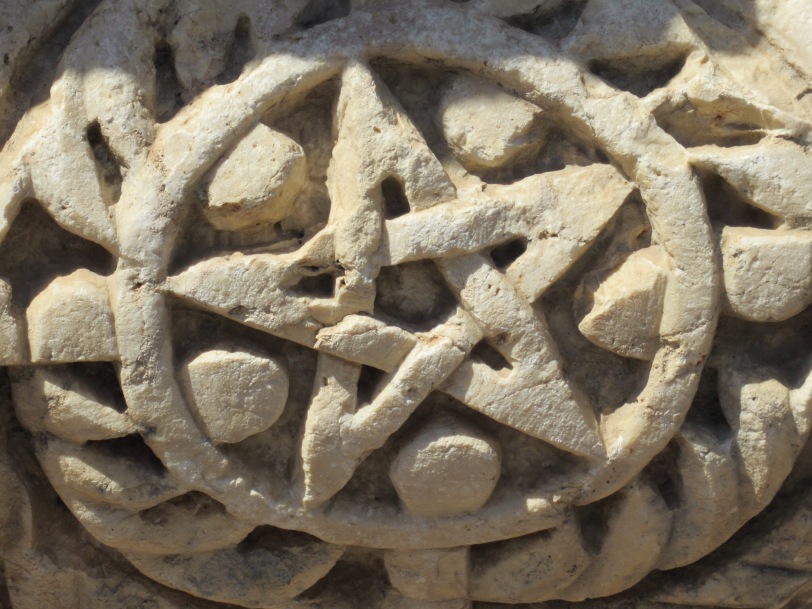 We took a lunch break sitting in front of giant outdoor AC units and are our schnitzel. It is much nicer to have a mid day meals than try to make it between breakfast and dinner. Besides we needed to get ready for our Galilean boat ride. The discovery on a ancient boat preserved in mud has provided the impetus for a local mini-tourism industry centered on the restored boat and boat rides on the Galilian lake. The scow like boats were a bit goofy but it was a pleasant change from the van. We were able to see our morning sites from the water as well as say that we had launched from the hometown of Mary Magdalene.
We were done and returned to the southern end of the lake to nap and recover. There was excellent roast beef at dinner tonight along with the usual chicken and fish. 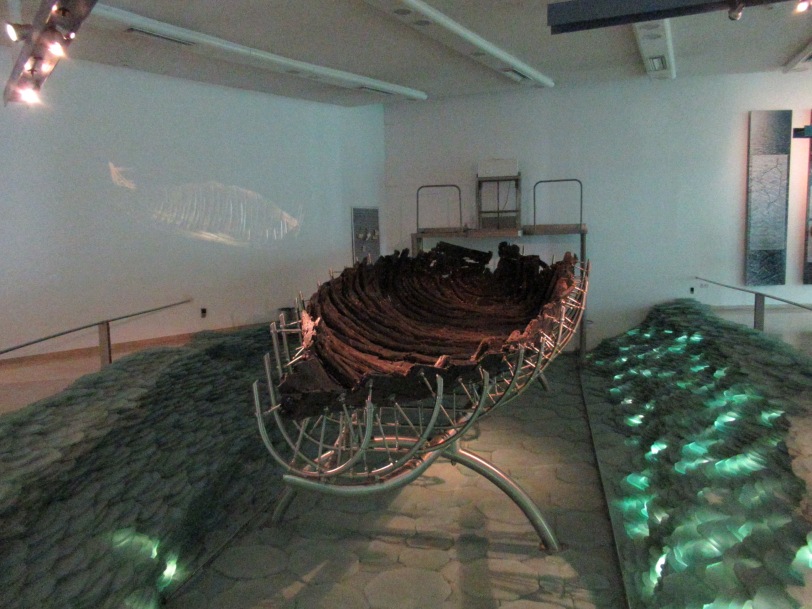 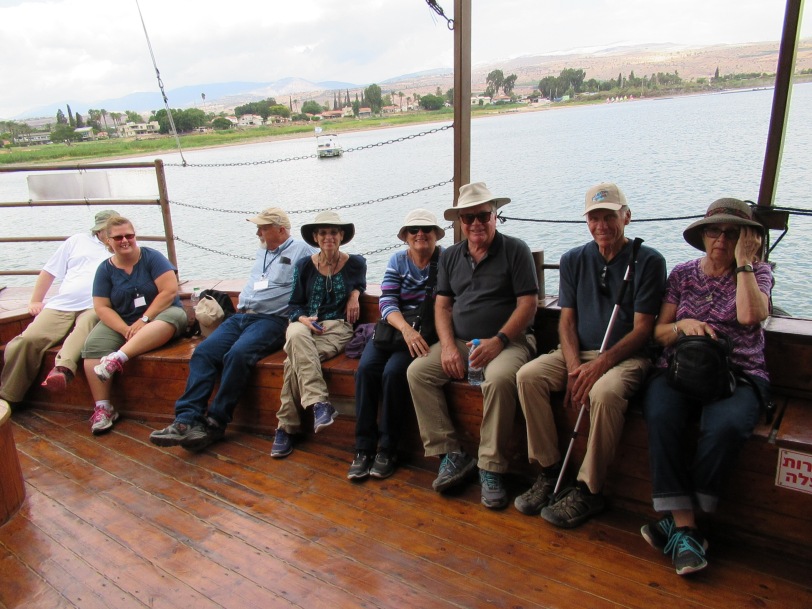 The Church of the Multiplication was built around 350 AD at the site where Jesus multiplied the loaves and fishes to feed the five thousand (Mark 6:30-44). John 6:1and Luke 9:10 state that the miracle occurred on the eastern side of the Sea of Galilee near Bethsaida. Even if the feeding of the 5,000 did not occur here, it is likely that Jesus met his disciples when they were fishing. In Matthew 4:18-24; Mark 1:16-20; Luke 5:1-11 Jesus called his disciples from the fishing boats to become “fishers of men”.
While not on the itinerary the nearby Church of the Primacy of St. Peter on the Galilean shore, is believed by Roman Catholics to be the place where Jesus returned after his Resurrection to help the disciples with their fishing. After a confession, Peter is commanded to “feed my sheep” (John 21:1-24). While the theology may be shaky, the site is wonderful with the ancient
rock boat dock. It leaves little to the imagination to see Jesus and the disciples having the fish dinner.

The Mount of the Beatitudes near Tabgha has been celebrated as the location for the Sermon on the Mount for some 1600 years. Matthew relates the longest piece of teaching by Jesus in chapters 5, 6 and 7. The actual location is not known for sure but the location over the Sea of Galilee is stunning. A Byzantine Church was built there in the 4th Century while the current Roman Catholic Church dates from its funding by Mussolini in 1938.

The boat ride on the Sea of Galilee will be a pleasant break. We land where the famous Sea of Galilee Boat is housed in a museum. It dates from the time of Jesus and was found in 1986, While there is no evidence connecting the boat to Jesus or the disciples, it is certainly worth looking at as an actual boat of the type that they used in the Bible