We headed north along the east coast of Galilee with the Golan Heights on our right. Just before reaching g the northern edge of the Galillean Sea we turned off to the excavate ruins of Bethsaida. In just a few steps we were troddingtnrough the hometown of Peter, Andrew and Philip. To be walking along the same path where Jesus healed the blind man and where people reached out to touch his robe was more than a little awakening. The small house foundations and walls are clearly seen. It required little or no imagination to place yourself back a couple millennia.

We continued north to what used to be the Syrian border with their old positions that they used to harass and occasionally kill Jewish settlers below were still visible and left as reminders. As we got near the Syrian border we reached where the tribe of Dan settled. The streams from Mt. Hermon flow through this region and provide a lush sanctuary for wildlife and shelter for the ruins of fortifications pre dating Abraham. The fortifications controlled access to Mesopotamia from the Mediterranean. We enjoyed the opportunity to relive the daily drama at the entry gate where visitors would be heard and judged by the local King. 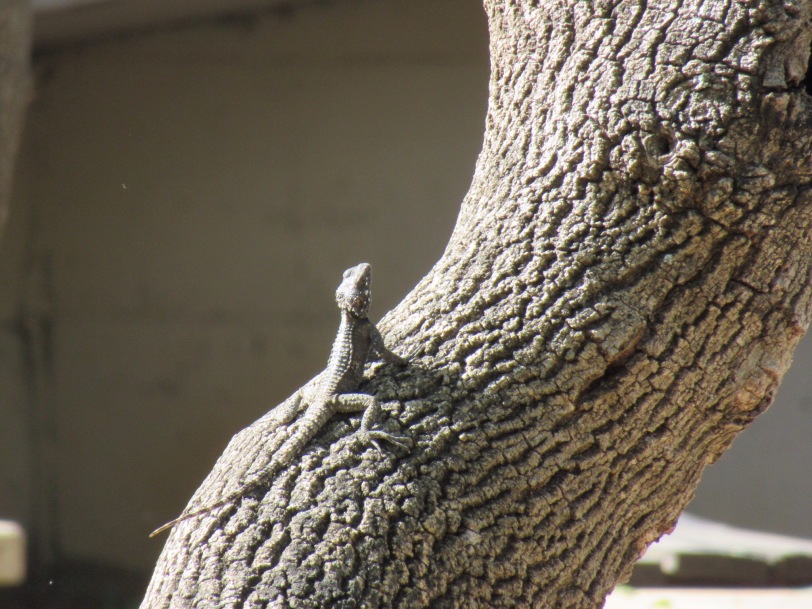 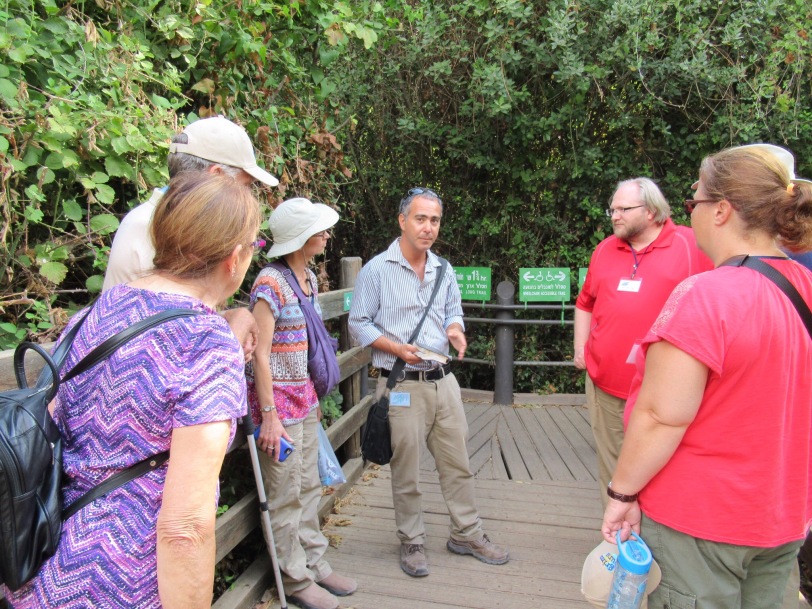 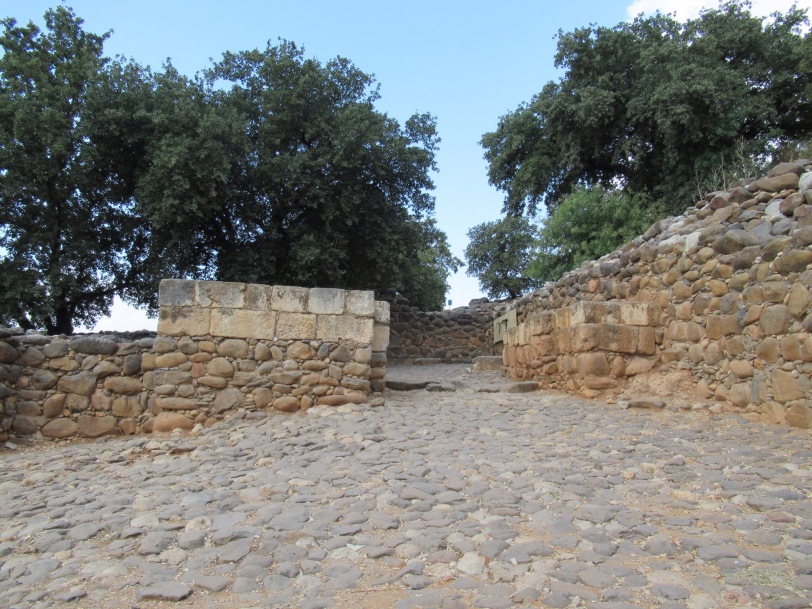 We next visited Ceasarea Philippi with its cult center based around what was believed to be one of entries to the Greek Hades. The city was a Gentile-Pagan city that Jesus brought his disciples ro make a point about the imminent end of the pagan world that his disciples would be tasked with completing. This is where Peter confessed his belief that Jesus was the Messsiah. We climbed around the now abandoned, except for tourists, the pagan temple and worship sites before returning to our comfy bus. It was somewhat amusing to see the remains of the temple for the Dancing Goats. I am not sure I would even want to see them dance let alone worship them. 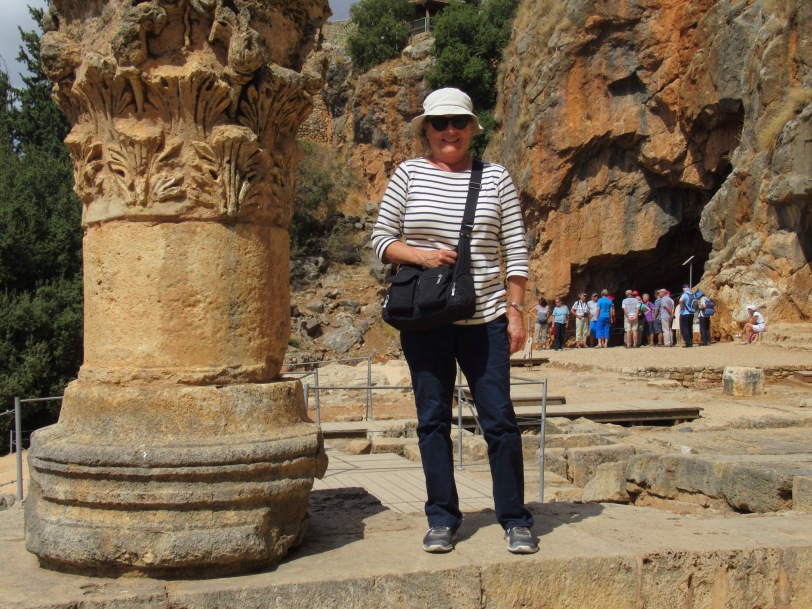 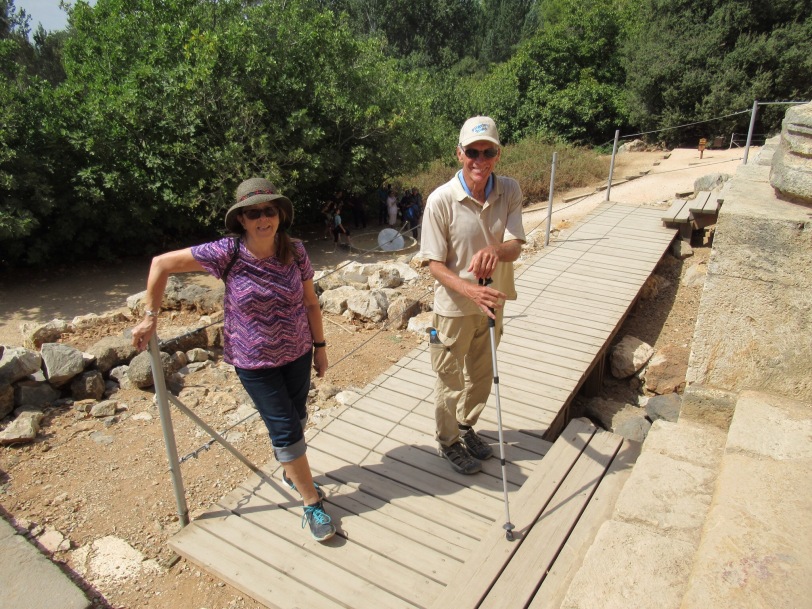 We left the north and headed back south to Galilee and the city of Chorazin or at least the ruins of the same. There is a partially restored synagogue with a nearby purification bath. Our guide explained the rules about kosher purification or at least the short version. After the explanation, I figured that I would need to visit the baths rather frequently. It a.so became more clear about the importance of the baptismal rite that John the Baptist performed and the subsequent Christian practice. We also got to lean on a replica of the Seat of Moses that was placed in synagogues giving the sitter the authority to pronounce wisdom from the seat. None of us felt ready.
﻿ 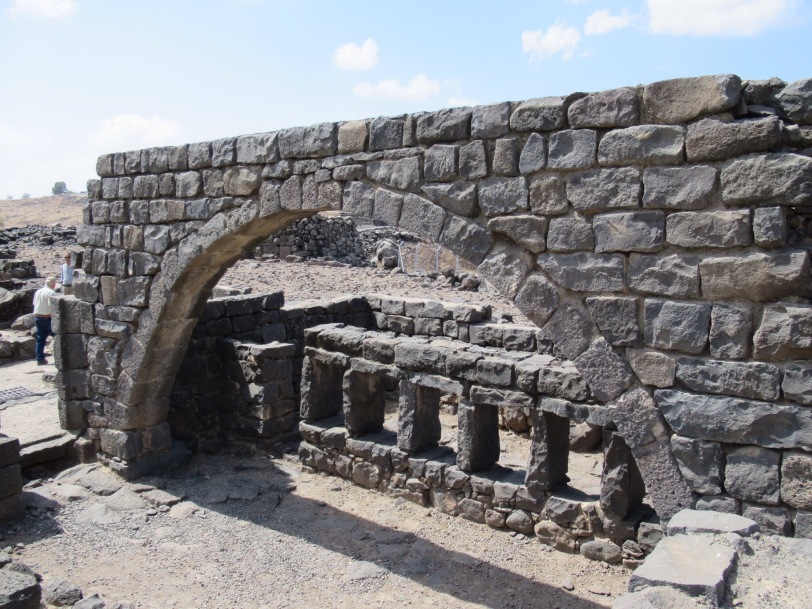 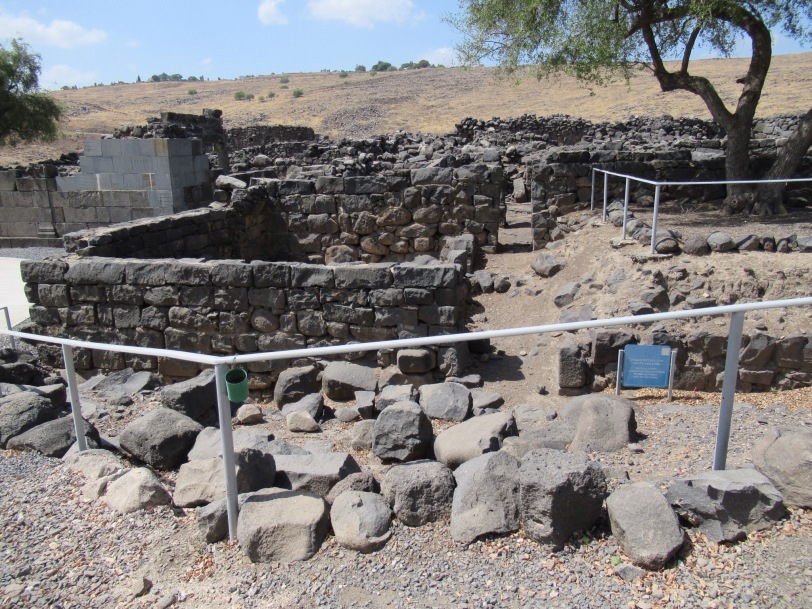 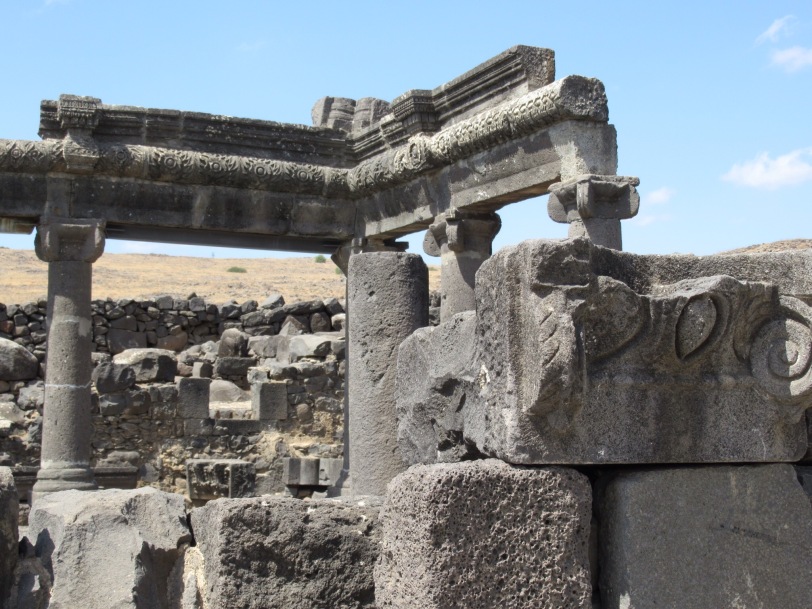 We returned to the hotel by way of the resort town of Tiberias. Peggy and I hiked to the local shopping center a mile away and bought flip flops, got some Shekels and  some Italian Gelati. We even managed to dip in the Sea of Galilee before dinner. Peggy is still working on laundry. The think our missing baggage will be in Tel Aviv tomorrow. We shall see. 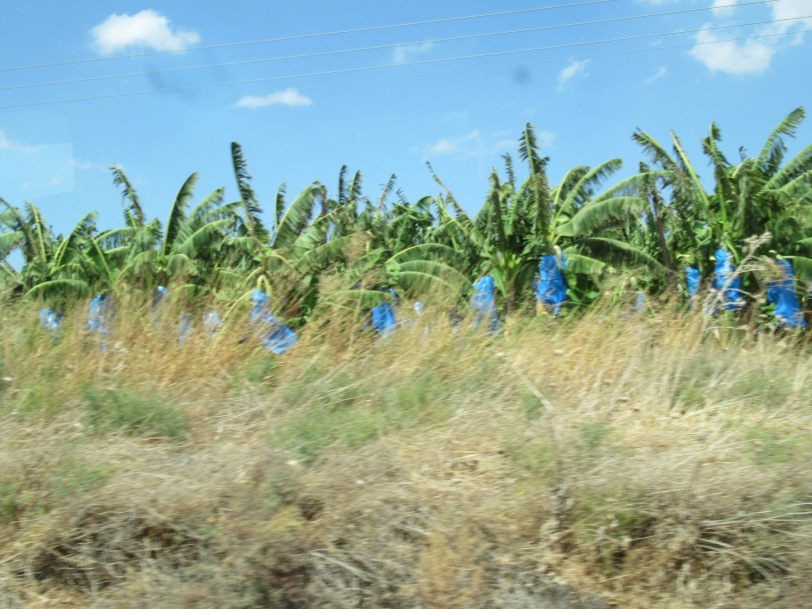 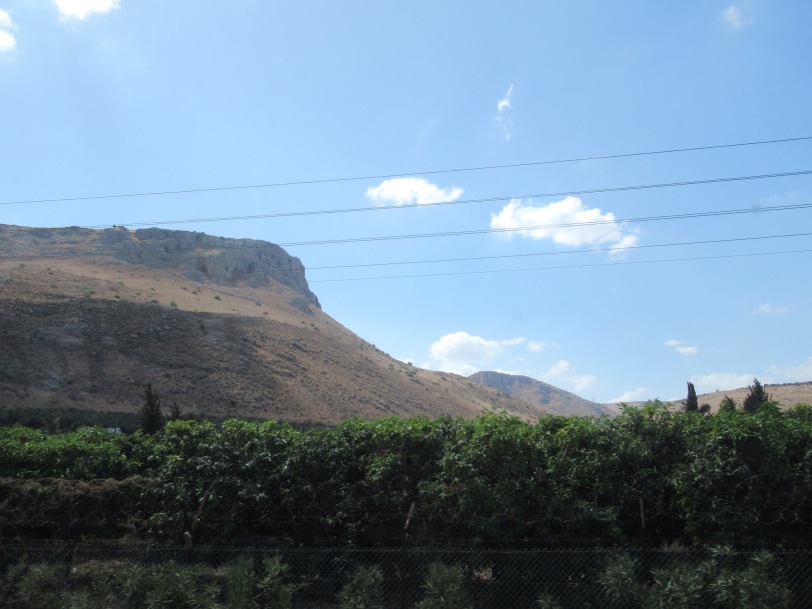 Background
Bethsaida (“house of fishing”). In Old Testament times it was called Geshur. David marries them, the daughter of the king of Geshur and she gives birth to Absalom (2 Samuel 3:3; 1 Chronicles 3:2). Jesus healed the blind outside Bethsaida (Mark 8:22-26) and also fed the five thousand near there (Luke 9:10-17). Jesus will rebuke the residents of Bethsaida for failing to repent despite the miracles he performed in their presence (Matthew 11:20-22; Luke 10:13-14). Bethsaida was also the hometown of the Apostles Peter, Andrew and Philip.

Dan was by tradition the most northern city in Israel while Beersheba marked the southern border (1 Kings 4:25). Abraham rescued his nephew Lot in Dan (Genesis 14:13-16). On a darker side, the tribe of Dan was not satisfied with their inheritance near Judah and settled in the north and gave their old homeland name of Judah to this new northerly part of Israel (Judges 18). In 1 Kings 12:26-33 we find the first northern kingdom of a divided Israel setting up golden calves to keep people from going to worship in Jerusalem. Jeremiah sees the city of Dan as the gateway for Judah’s enemies (Jeremiah 4:15; 8:15-16). Herod the Great’s son, Philip renamed Pania (after the Greek god Pan) Caesarea after the Roman Emperor. It was commonly known as Caesarea Philppi to distinguish it from the coastal Caesarea. Matthew establishes that Caesarea was the northern limit of Jesus’ ministry (Matthew 16:13, Mark 8-27). Peter made his confession of Christ’s divine nature in the region of Caesarea.

The ancient synagogue of Chorazin contains an example of the “seat of Moses” where the religious leaders would sit and teach. Jesus will have harsh words for the citizens of this town for same reason as for those in Bethsaida (Matthew 11:20-22; Luke 10:13-14).

Our final visit of the day is to Capernaum which is located on the shores of the Sea of Galilee. Because of its location on important trade routes there was a heavy Roman presence in the form of a garrison (Matthew 8:5-9), a customs station Matthew (9:9). Jesus will leave a Nazareth that rejects him and will make Capernaum the center of his ministry for eighteen to twenty months and will call Peter, Andrew, James and John to follow him in Capernaum (Matthew 4:18-22; Mark 1:16-21). The customs official, Mark will leave his tollhouse to become a disciple.

One thought on “Adventures North of Galilee”