Herod the Great was a great politician. He managed to either pick the winning side or quickly shift allegiances when needed. His construction of the port city of Caesarea Maritime in honor of Augustus Caesar was a stroke of genius after his recent support for Augustus’ rival Mark Anthony. It probably saved his bacon so to speak. Anyway, the ruins of the port are still impressive with its theatre, hippodrome ( for chariot racing) and the remnants of his seaside palace. Our guide, Eriz was quick to explain that the creation of this man made harbor allowed Christianity to have ready access to the rest of the pagan Roman Empire. We enjoyed the chance to sit down for a couple minutes in the restored theatre. 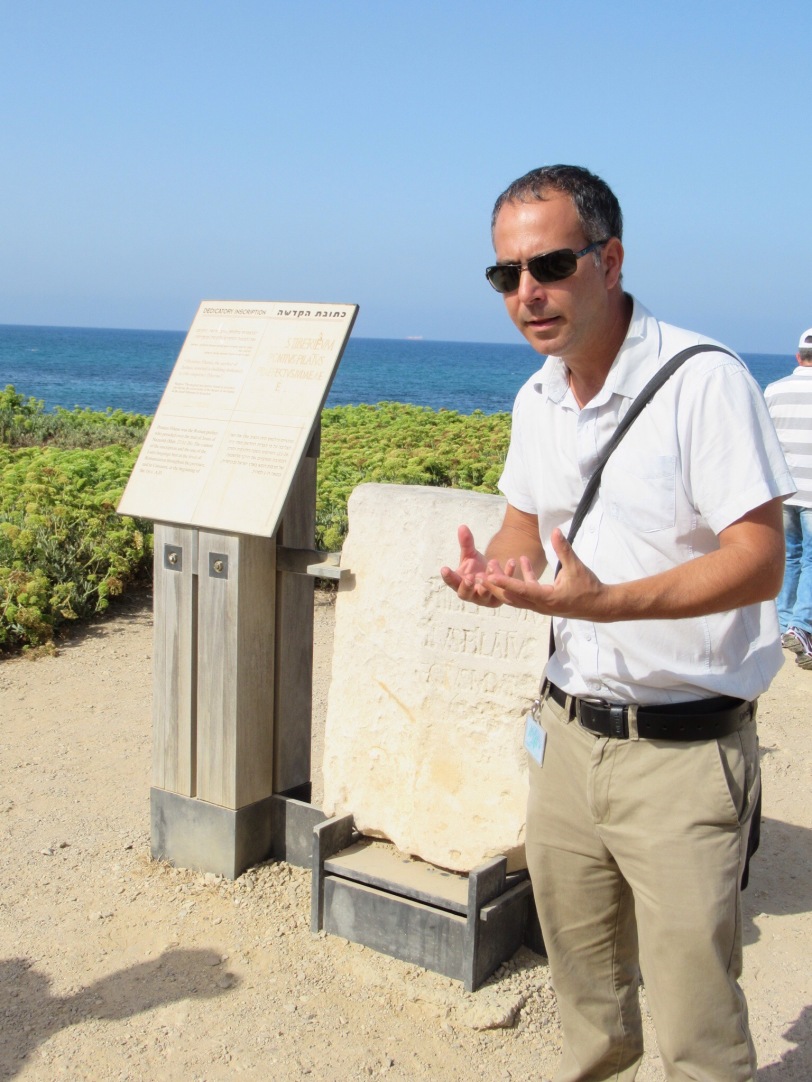 Boarding our fancy tour bus, we headed north to Mt. Carmel that lies astride the ancient trade route known as the Via Mares. The modern road system was much easier than walking despite the traffic. Our goal was to reach the traditional location where Elijah held is contest with the priests of Baal. The location included grand views of the Jezreel Valley as well as a shady spot to re-read the story. Looking down on the valley from the heights to see the locations of so much history is a bit mind blowing. 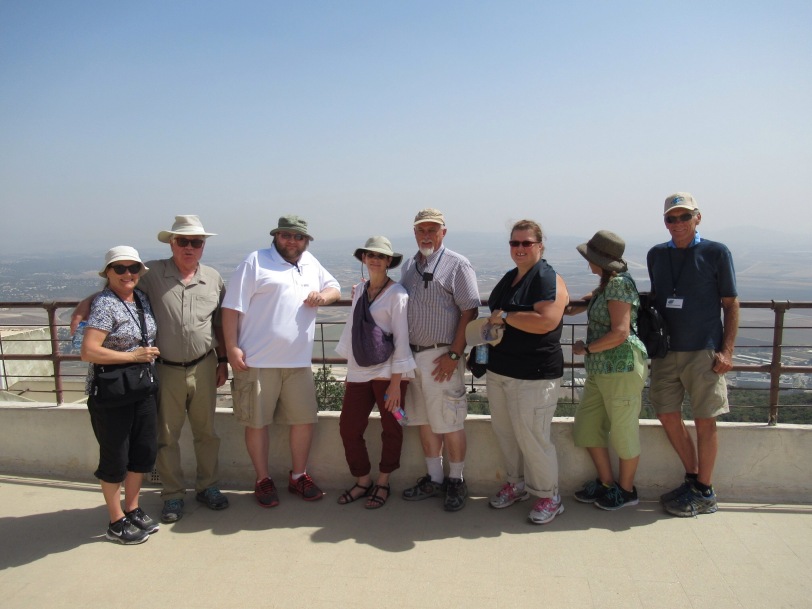 We managed to grab a chicken schnitzel and salad stuffed pita pocket and tasty fries right before a massive tour group hit the same restaurant at the entrance to the Megiddo Tel. The 25 plus layers of civilizations and cultures and their histories are stacked on top of each other to make up this massive archeological site that is also a World Heritage site. Our interest in the site was focused on the remnants from the time the Jewish kings like Solomon. The gates, stables and fortifications are still there as described in scripture. We even walked through the underground water tunnel that met the needs of the thirsty defenders. We also got to visualize the battle site for the ultimate battle described in the Book of Revelation at Armageddon – the valley of Megiddo. 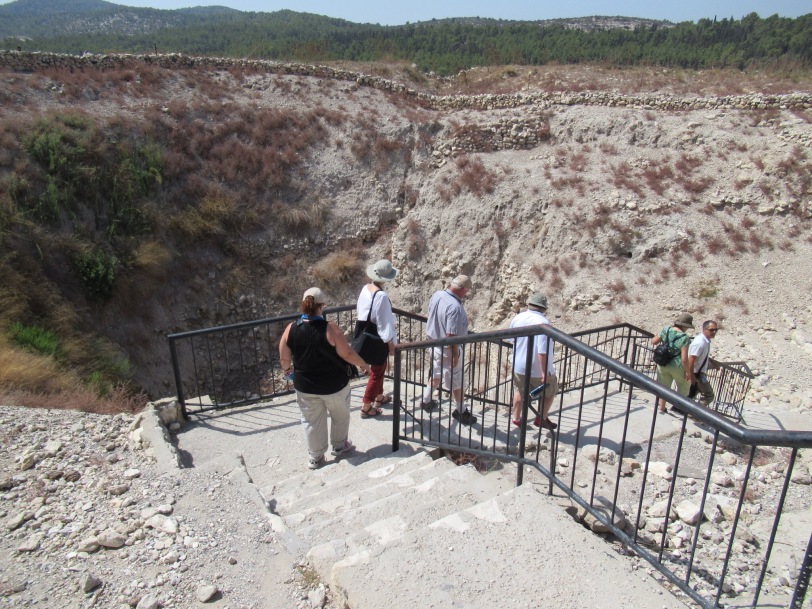 In Nazareth we were treated to a wonderful recreation of life in Nazareth during the time Jesus. I found the recreation much more valuable than a visit to the Church of the Annunciation that we could see a few blocks from this venue. I enjoyed the explanation about the connection between Jesus and the shoots on the trunk of the olive tree as well as the short sermonette in the village synagogue.

We were pooped as we made our way the lakeside resort on the southern shore of the Sea of Galilee. Still no luggage for a couple of us but we are pulling together and will make it work.
Background

Caesarea on the Mediterranean was founded by Herod the Great in 22 BC and named it in honor of his patron Augustus Caesar. It served as the home of the Roman procurators including Pontius Pilate whose name is inscribed as “prefect of Judah”. The theater and aqueduct were built by Herod and remodeled by the Romans. The existing walls and harbor gate were built by the crusaders in the 12th Century.

The Acts of the Apostles details the connections with Caesarea. In Acts 10 – Peter preaches at Cornelius’ home. In Acts 12:19-24 Herod Agrippa I is struck down by God for accepting the worship of himself as a god. Paul visits Caesarea three times (Acts 9:30; 18:22; 21:8-16). Paul spends two years as a prisoner in Caesarea despite appearances before the Roman authorities, Felix and Festus as well as before King Herod Agrippa II.

Mount Carmel is a wooded mountain range near the seaport of Haifa. Carmel was famous for its lush vegetation and became a sanctuary for the worship of Baal. Strangely, Solomon compares the majesty of his bride’s head to the summit of Carmel (Song of Songs 7:5). More importantly, Mt. Carmel is the location for the showdown between Elijah and the prophets of Baal (1 Kings 18:19-39). Isaiah uses Carmel as a symbol of beauty and fruitfulness (Isaiah 35:2). When it is referred to as languishing and withering it indicates God’s judgement on Israel (Isaiah 33:9; Amos 1:2; Nahum 1:4). Jeremiah compares the grandeur of Nebuchadnezzar to Mount Carmel (Jeremiah 46:18). That is quite a build up for our “driveby” visit.

The Jezreel Valley is easily one of the more historic valleys in world history serving as the ancient highway between Egypt and Mesopotamia. The north south road is crossed by the main route from the Jordan to the Mediterranean. From the valley floor you can see Beit Shean (or Beth Shan), Mount Carmel, Mount Gilead, the city of J, Megiddo, the hill of Moreh, Nazareth and Mount Tabor.

God allotted the Valley of Jezreel to the tribe of Manasseh but failed because of the resident “iron chariots” (Joshua 17:16). Gideon defeated the Midianites while they camped on the Hill of Moreh (Judges 6:33-37; 7:1-25). Saul was killed by the Philistines on Mt. Gilboa (1 Samuel 29:1; 31:1-8). 1 Kings 4:12 finds Solomon placing Beth Shan, Mediddo and Jezebel under Baana. Ahab and Jezebel resided in Jezebel that also provided shelter for Elijah after the Baal priest contest on Mt. Carmel (1 Kings 18:45-19:2). Elisha, Jehu, Joram; Ahaziah and Jezebel were killed in Jezebel. I assume we will safely pass through on our way to Armageddon.

In contrast to the Old Testament, Jesus raises from the dead a young son of a woman living on the Northern slope of the Hill of Moreh (Luke 7:11-17). Megiddo is an extensive archeological site. There are 26 separate layers of occupation. The King of Megiddo was one of Joshua’s defeated enemies during the conquest (Joshua 12:7; 21). The tribe of Manasseh was allocated Megiddo but failed to drive the Canaanites out (Judge 1:27). Deborah and Barak defeated Sisera and his armies by the waters of Megiddo (Judges 5:21). Solomon fortifies Megiddo (1 Kings 4:12) while Josiah unwisely gets in the way of Pharaoh Neco marching to Mesopotamia and is killed at Megiddo (Chronicles 35:20-24). Of course, (Revel the main event is coming when last great gathering of armies just before Christ’s return takes place on the Hill of Megiddo – Armageddon (Revelation 16:

Nazareth is never mentioned in the Old Testament despite its proximity to the Jezreel Valley. The New Testament corrects the omission. The Archangel Gabriel appears to Mary in Nazareth and announces the good news (Luke 1:26-33), and Joseph and Mary depart for Bethlehem (Luke 2:1-7). After fleeing from Herod’s order to kill the infants of Bethlehem, Jesus, Mary and Joseph return to Nazareth (Matthew 2:21-23. Jesus spent his childhood and young adulthood in Nazareth and traveled to Jerusalem for the annual Feast of Passover celebrations (Luke 2:41-52). After his Baptism in the Jordan, Jesus preaches his first sermon in Nazareth and it is not well received. The villagers threaten to trow him from the Mount of the Precipice (Luke 4:16-30). Jesus will return to Nazareth and struggles to perform miracles because of the persistent disbelief of the Nazarites.
Tiberias was founded in 20 AD and probably provided many jobs for carpenters and other construction workers. It was named for the Emperor Tiberius and was famous for its hot springs and mineral baths. The Sea of Galilee took on the name of Sea of Tiberias durng Roman times. Traditional Jews continued to call the sea Kinneret. Jesus ministered on the Sea of Galilee but not in Tiberias. People from Tiberias would flock to hear him using boats to reach him (John 6:1; 21:1). Tiberias escaped Jesus’ negative appraisal of Koran, Bethsaida and Capernaum on the Sea of Galilee, and it still exists (Matthew 11:20-24). Modern technology may also play a role in saving Tiberias. Israeli desalination plants are helping to refill and stabilize the Sea of Galilee.