Moabites and John the Baptist and the Beginnings of Christian Tourism

Enjoyed a peaceful breakfast before mounting up and heading out of Amman. Traffic is light because of the voting holiday. Folks sleep in before doing their democratic duty. Our drive to Medaba was pretty short. Now Medaba is not on everyone’s list of sights but a stop to look at the map was valuable. The map in question is the earliest map of the Holy Land in existence.

Around 500, the folks at a Greek Orthodox Church decided to create a map of the Holy Land for the increasing crowds of Pilgrims. They covered the floor of their church with some 2 million chips of colored rock to create the detailed map. It was kind of like Google Maps for visitors like us today. It continues to provide valuable clues for modern archeologists about important locations. What remains today is incomplete but still amazing considering its 15 Centuries on the floor of a Byzantine structure that has been rebuilt many times. We were able to orient ourselves for the day as well as for the rest of our trip. The drive around Medaba city was  interesting because it is a real Arab city without  pretense and full of everyday activities.

We drove a few miles up hill to the top of Mount Nebo. We passed by another Moses spring that Moses created with his rod to keep the thirsty Hebrew happy. The summit is as close to the promised land as Moses will get. From the vantage point, we could see the Jordan River, the Dead Sea,Jericho and Jerusalem in the distance. A new basilica is under construction  by the Franciscans. We enjoyed the early mosaics that were the floors of the many churches built on the site.Pastor Matt enjoyed an ecumenical moment with the Local Franciscan Friar. 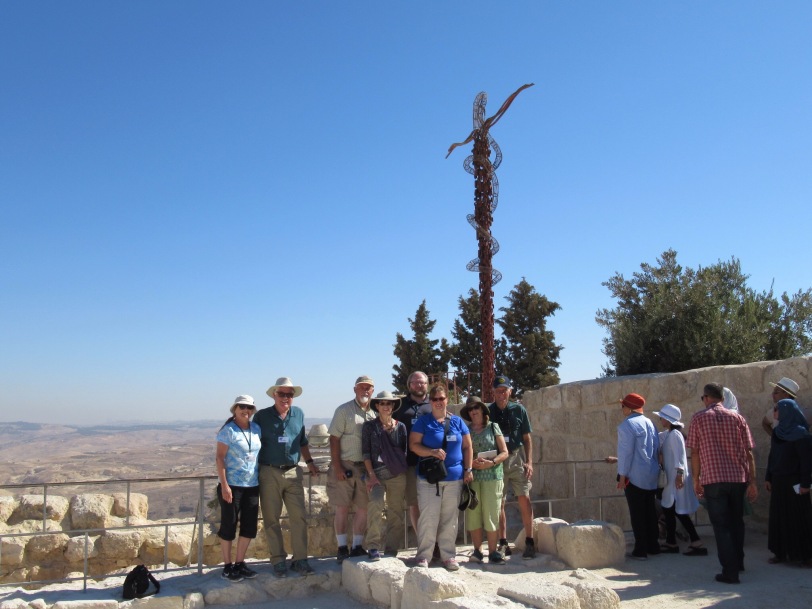 Since Mt. Nebo is a center for the production of tesserae mosaics, we stopped at a local workshop and sales room. The craftsmen and craftswomen have disabilities but not in the making of their works.  Enjoyed a cup of black tea flavored with sage. But we were priced out of market for the artwork. We carefully wound down the mountain to the level of the Dead Sea some 3,000 feet under the summit of MT. Nebo. 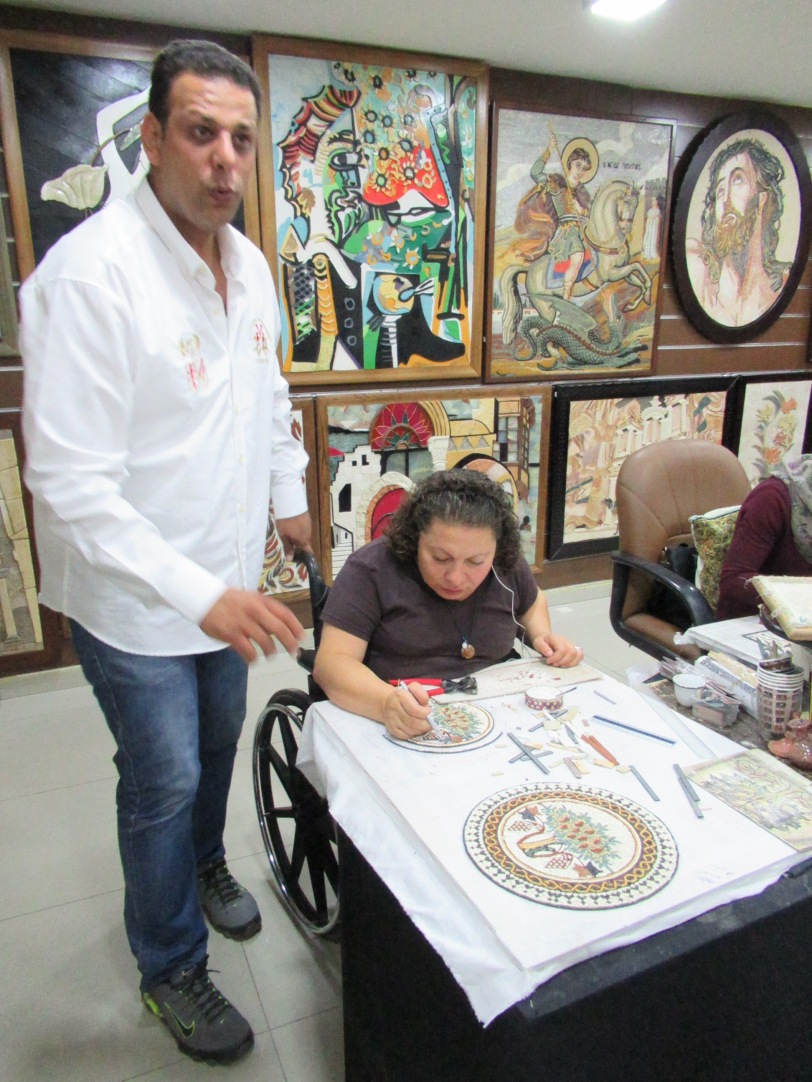 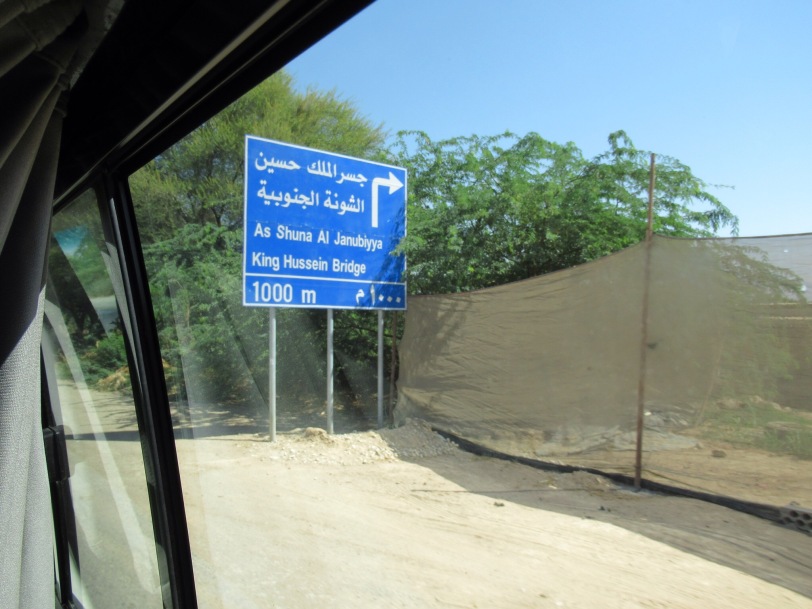 As we approached the bottom, we found Bethany Beyond the Jordan. John the Baptist lived in the local caves that are still there. Elijah found the Chariots of Fire and most importantly, Jesus was himself baptized by John at this location. The location is well documented on the Medana maps and by archeological and non-Biblical sources. Because of the drying up of the lower JordanRiver, the site is extremely humble.For an act of suchhumility and obedience to take place here is fitting. It is also warm. And in the wilderness we sat on the Jordanian side of the river and watched numerous self-Baptisms on the Israeli side around 20 feet away. We were not sure what was actually happening. Our guide reminded us that there is nothing in the Bible about where a Baptism should take place. While this location was certainly historic, I am not too sure what we were witnessing was what John the Baptist would find appropriate. But I will not judge their actions as I am glad that the minefields are gone and people can safely visit the site.

We crossed the sometimes notoriuosly difficult border with Israel and met our new guide and our much fancier Van. We immediately noticed the difference between the two countries.. Much more later. We are staying on the beach in Netanyahu and enjoyed dipping our toes in the Mediterranean. It is good that we can brush our teeth with tap,water. And enjoy the endless fresh fruit and salads at the Buffett.

The Moabites occupy the center of the eastern Jordan landscape with The Ammonites to the north and the Edomites to their south. Essentially, their land lies to the east of the Dead Sea. The Moabites were descended from Lot and his eldest daughter following the destruction of Sodom and Gomorrah (Genesis 19:30-38).The Moabites were given this tableland east of the Dead Sea (Deuteronomy 2:9) and also considered to be a related nation to Israel. During the Exodus, the Israelites passed by the Moab and eventually crossed into the Promised Land from the “plains of Moab” (Numbers 21:11-13; Judges 11:17-18). The ancient capital of Moab was Dibon where David sent his parents for safety when he was pursued by Saul (1 Samuel 22:3-4).

The Book of Ruth tells probably the most famous story in the Bible about the Moabites. Elimelech, Naomi and their sons flee to Moab to escape famine in Bethlehem. Where they reside while in Moab is unclear but it could have been in the ancient capital Dibon (modern Dhiban). Naomi will eventually return to Bethlehem with her daughter-in-law, Ruth the Moabitess. Ruth marries Boaz and from their line comes David (Ruth 4:22) and Jesus Matthew 1:5, 16).

Madaba or Biblical Medeba was known by both Moses  and Joshua (Numbers 21:30 and Joshua 13:9).  Today it is best known for the Byzantine mosaics found in the Greek Orthodox Church of St. George. Its early Christian history is documented in the acts of the Council of Chalcedon in 451 AD. The Archbishop of Rostra, the provincial capital, signed on behalf of Gaiano, the Bishop of Medabeni.

The most famous mosaic, the Map of Medaba was discovered in 1896. The two million pieces of colored stone (tesserae) depict the hills, valleys and towns in Palestine and the Nile Delta. It also contains the earliest representation of Byzantine Jerusalem. The Church of the Holy Sepulcher is clearly depicted and the map provides scholars with important information about the layout and plan of medieval Jerusalem.

As a center of Moabite culture early many Moabite archeological remains have been unearthed. As Isaiah predicts the inhabitants of Medeba and Nebo would weep over their destruction (Isaiah 15:2). Important to the history of Israel and Moab is the Mesha Stele that was discovered in Dhiban in in 1858. The stone inscriptions parallel the Biblical Book of Kings (2 Kings (2 Kings 3:4-8) and contain a rare reference to the kingdom of Israel and to Yahweh. The stele itself is at the Louvre.

Mount Nebo is an elevated ridge in Jordan where the Bible says God allowed Moses to see the Promised Land from it. Christian tradition is that Moses was buried ”in the valley in the land of Moab, opposite Beth-peor, but no man knows his burial place today” (Deuteronomy 34:6). There is a fair amount of dispute about where his physical body was interred. Muslims revere his supposed buried side 6 miles south of Jericho.  According 2 Maccabees, (2:4-7), the Prophet Jeremiah hid the Ark of the Covenant in a cave on the mountain (the NIV excludes Maccabees as we are not Greek Orthodox or Roman Catholic, but it makes for interesting historical reading).

Bethany Beyond the Jordan on the east bank of the Jordan River is the traditional crossing point for the Twelve Tribes of Israel into the Promised Land (Numbers 22:1).

Nearby is “Elijah’s Hill” or Hermon where Elisha watched as God took Elijah in a chariot of fire to heaven (2 Kings 2:1-15).

On the western side of the hill there is a cave where John the Baptist lived and where Jesus visited him. A 5th Century monastery is built atop the site. The reeds and bushes that we see remind us of John’s diet of honey and locusts that still inhabit the area (Matthew 3:4). John was baptizing possibly using waters from the spring, Wadi al-Karrar that flows into the Jordan (John 3:23). Of course, Jesus was baptized by John at “Bethany on the other side of the Jordan.” (John 1:28-29). The site today receives fewer visitors than the western site in Israel (100,000 vs 300,000.  Even though there is much more archeological evidence (not to mention Biblical) to support this location as the site of Jesus’ baptism by John, it wasn’t open until 2002 when the 1967 War land mines were finally cleared. The Israeli site Qasr el-Yahud one the west bank of the Jordan is on our schedule. It might be worthwhile to discuss visiting this site as part of the trip.

The Allenby Bridge to the Israelis or the King Hussein Bridge to the Jordanians was built in 1990’s with the aid of the Japanese Government after the 1994 Israel-Jordan Peace Treaty. The bridge replaced both the old wooden bridge and previous ones destroyed in post-WWII wars. The Allenby name comes from the British General Edmund Allenby during the First World War.

Tel Aviv sits on the north side of ancient Joppa (or Jaffa) that was allotted to the tribe of Dan who failed to conquer it (Joshua19:46-47). During Solomon’s reign Joppa was the chief seaport of Jerusalem that saw important cargos like the Cedars of Lebanon arrive here for the construction of the Temple (2 Chronicles 2:16). Jonah also embarked on his ill fated cruise from Joppa (Jonah1:3). In the New Testament, Joppa is where Peter raises Dorcas to life (Acts 9:36-43) and also had his vision to share the gospel with the Gentiles like Cornelius (Acts 10).The history of modern Joppa-Jaffa-Yafo is complex. Most of Jaffa was Arab during the early years of Israel as a modern nation. By 1950 most of Jaffa was incorporated into Tel Aviv. Recently efforts have been made to restore important Islamic and Arab landmarks. The old city is not part of most tourist visits but the port can be seen from the Tel Aviv promenade.