A Trip to the The Dead Sea

Not sure what the theme of today should be. We moved from the only city of the Gentile Decapolis, Beit-She’an to the Dead Sea with stops at En Gedi and Masada. The story at each is important all have seen conflict although the Dead Sea turmoil is largely environmental. Oh well, here goes. 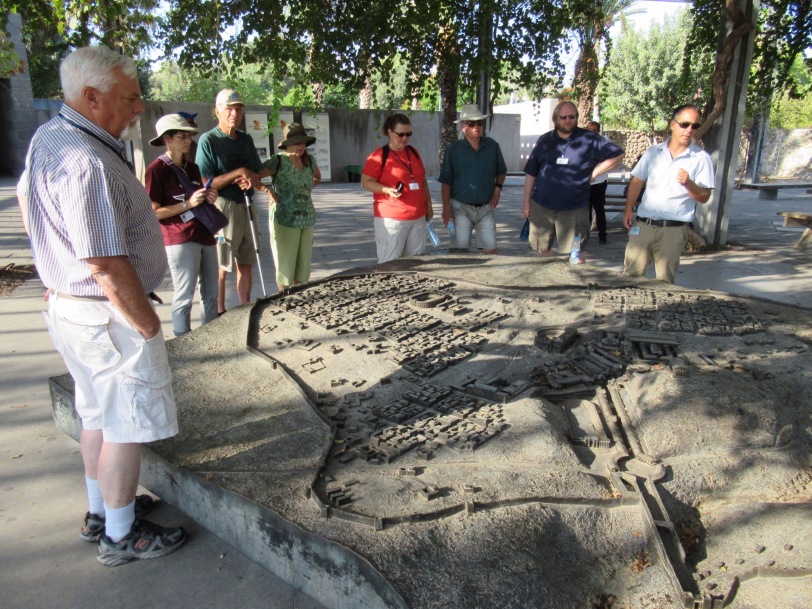 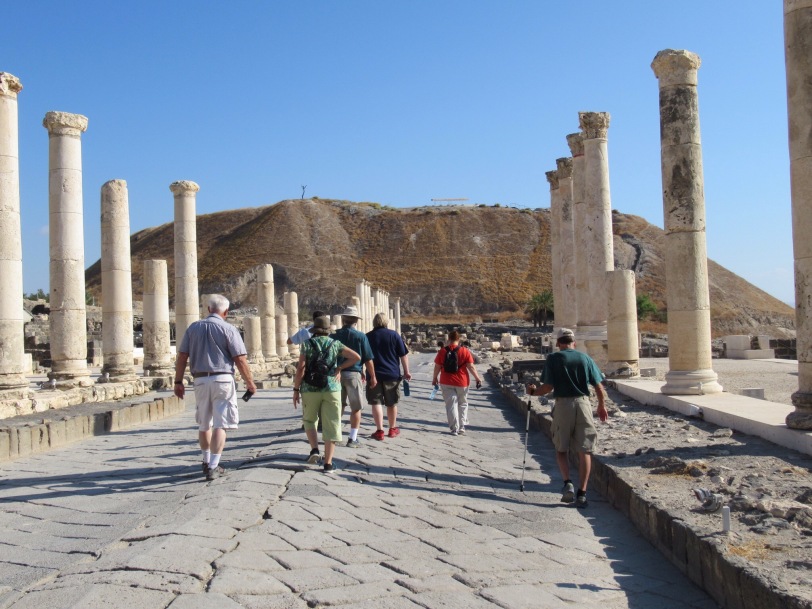 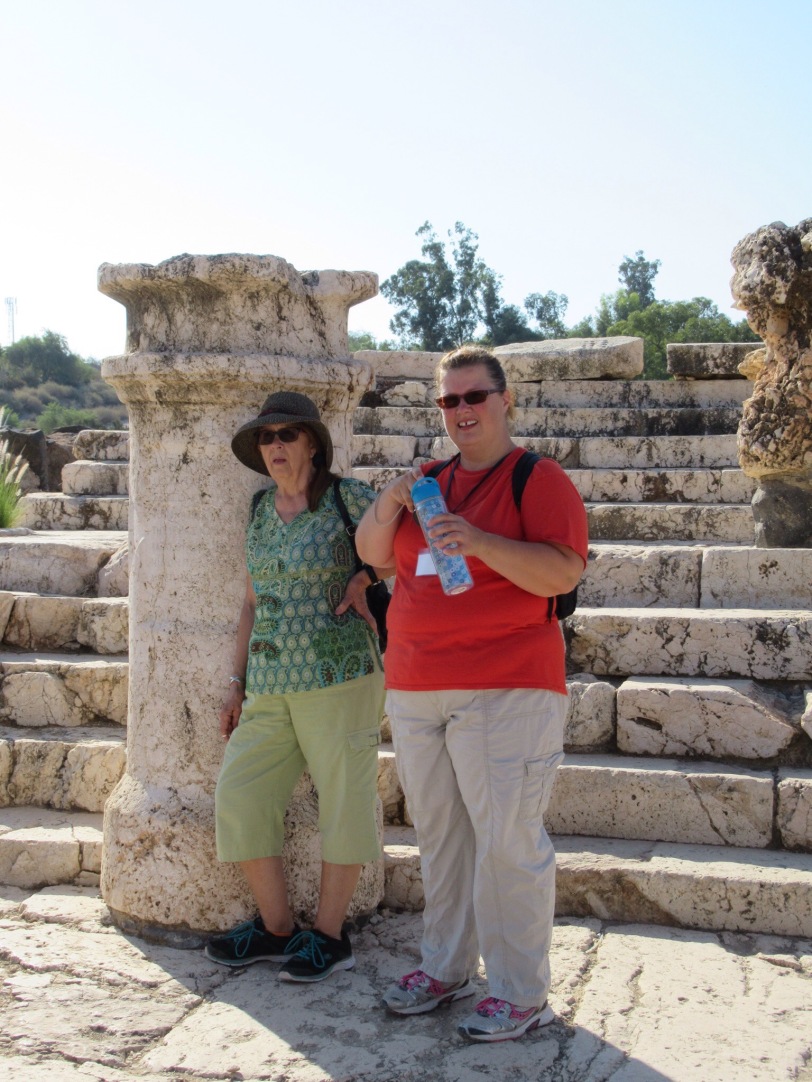 Beit-She’an or Scythopolis as I prefer to call it is the largest archeological site and best preserved ruins from Roman times. The site actually goes back to the time of the Philistines and before. The remains of those civilizations are largely buried under a massive Tel with a set of stairs to reach the top that none of us wanted to use. On top of the Tel, the later Greeks and Romans built their temples to Zeus. Somewhere in the Tel are the remains of the Philistine city where Saul was displayed on the wall after his defeat by the same. Thus ended his line and created an opening for David. 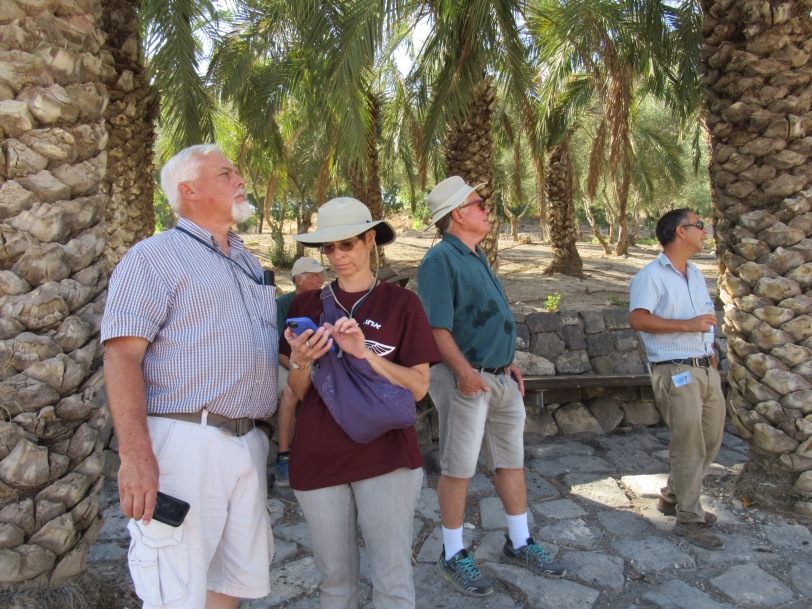 What we the tourist see today are the remains of the bustling Greek and later Roman city occupied by Gentiles in largely Jewish Palestine. The city looks and feels Roman with its baths, theatre, forum and grid-like layout. We roamed around ourselves taking notice of the massive stone works and impressive public baths and toilets. The entire city was abandoned in the 8th Century after devastating earthquakes. But by that time, Muslims had over run the region and Roman and Byzantine empires were memories. Only a small amount of this large city has been excavated as most of the remainder lies under the modern city of Beit-She’an. 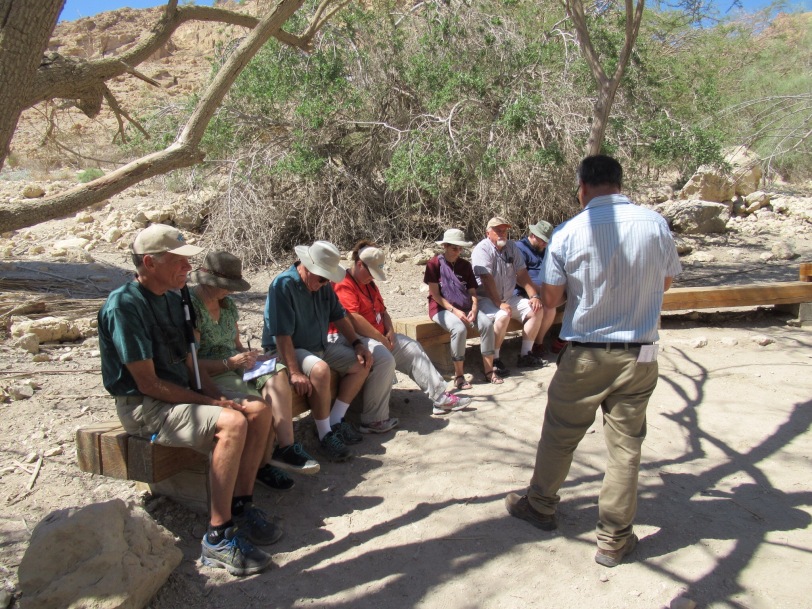 As we retraced some of our earlier steps along the Jordan we passed by the historic location of Jesus’ baptism as well as numerous Israeli security posts and check-points. We sailed through and reached the desert oasis of En Gedi by late morning. The oasis lies above the Dead Sea in a canyon surrounded by caves and crumbly rocks. There is a road to Jerusalem from this point. It must be reserved for very healthy folks built like mountain goats. 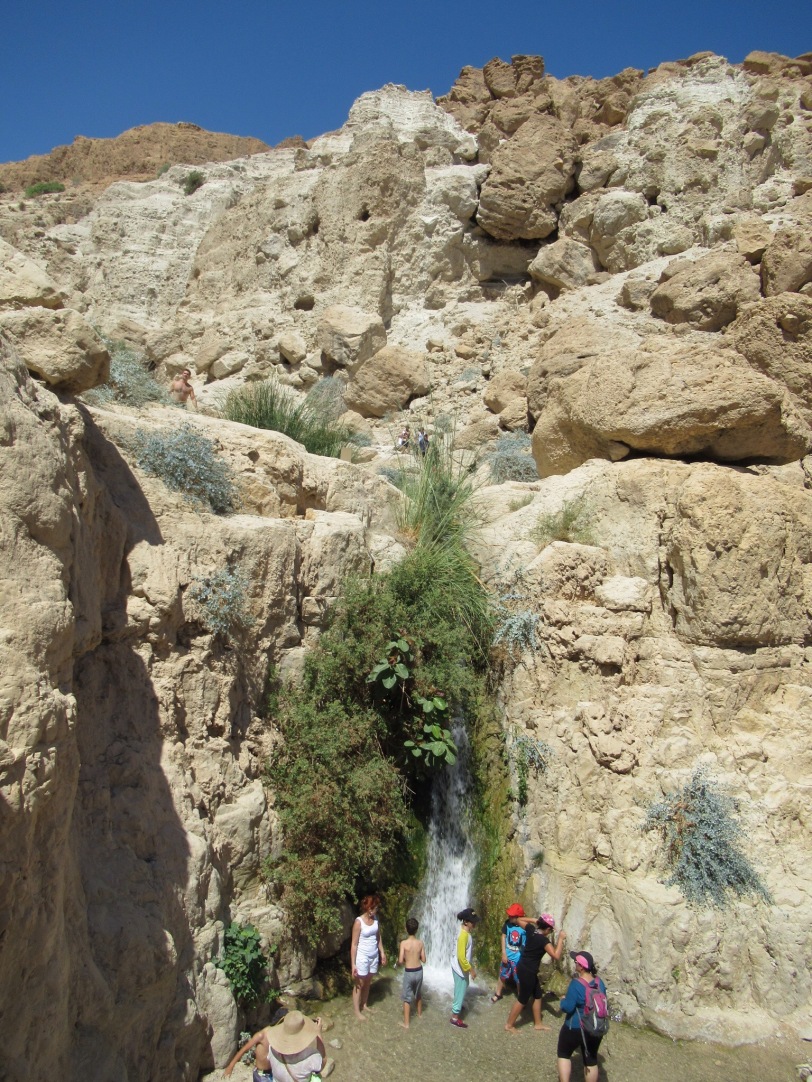 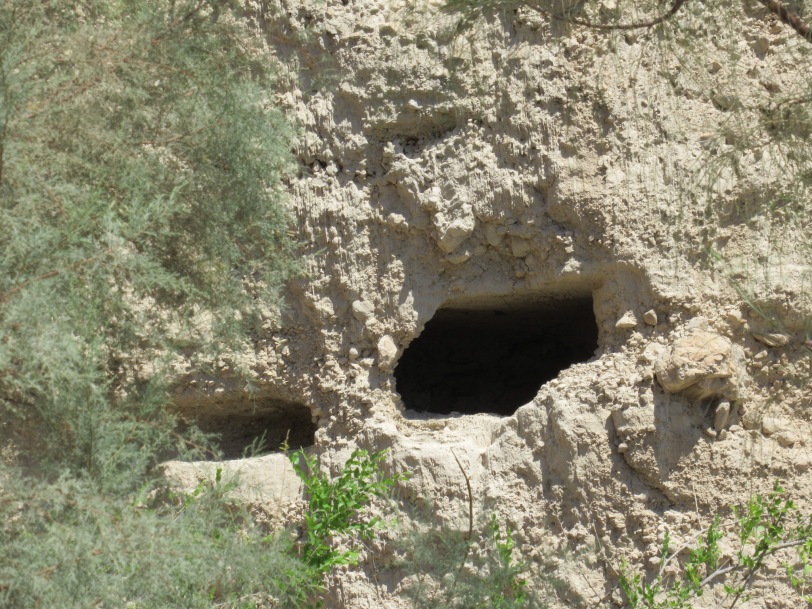 En Gedi is where David and his supporters hid from Saul and where David convinced Saul that they could be pals. It is also the location of large battles between ancient Israel and their neighbors to the east. The nice little water fall did not look important enough to fight over. But I guess that there is more to En Gedi outside this one canyon. I do know that there was just enough room for our our small groups and the two or three Korean groups that we shared the narrow walkway with on our way in and out. 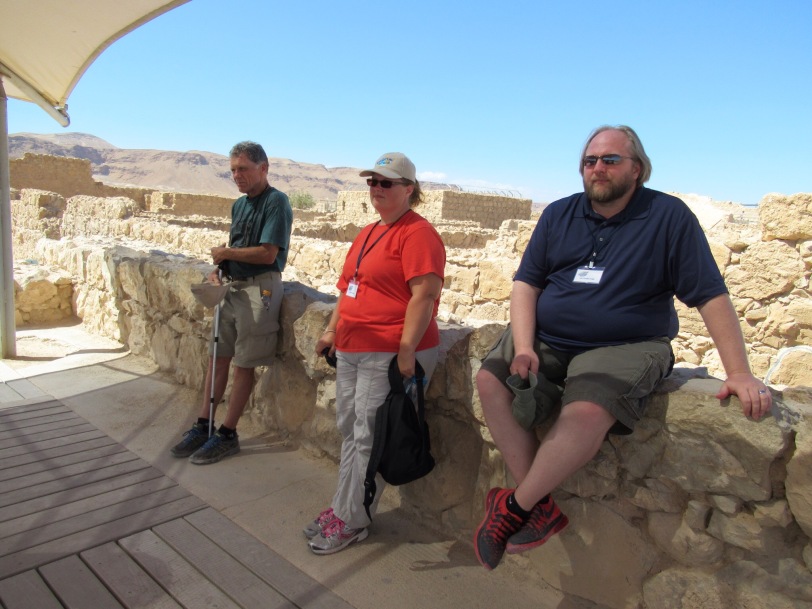 We continued south along the Dead Sea shore until we reached the fortress known as Masada. We found out that Masada is actually a generic term for fortification. But to the world it is associated with this mountaintop refuge where as many as 1,000 Jewish rebels held out against a much larger Roman force intent on extinguishing the rebellion that had started in 66AD. The rebels had enjoyed the stockpiles of food and water left by Herod the Great who had created his own refuge in the 1st Century BC. 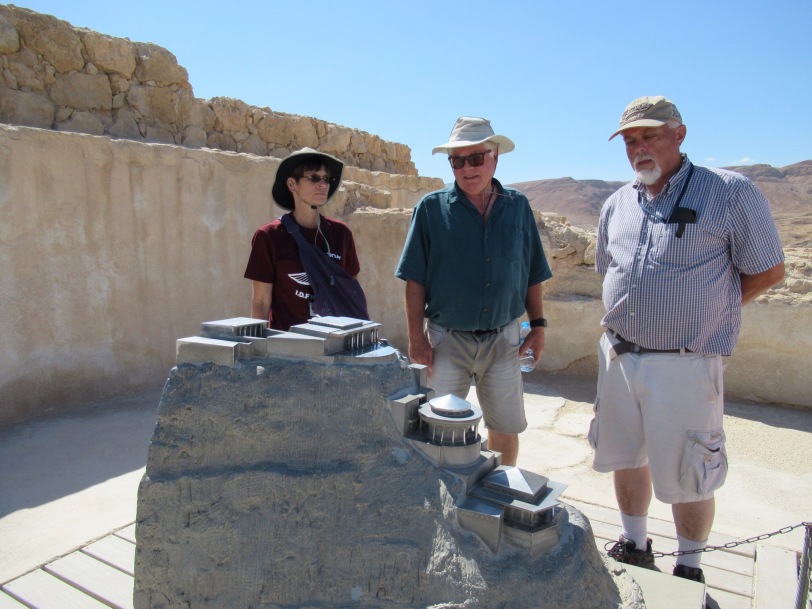 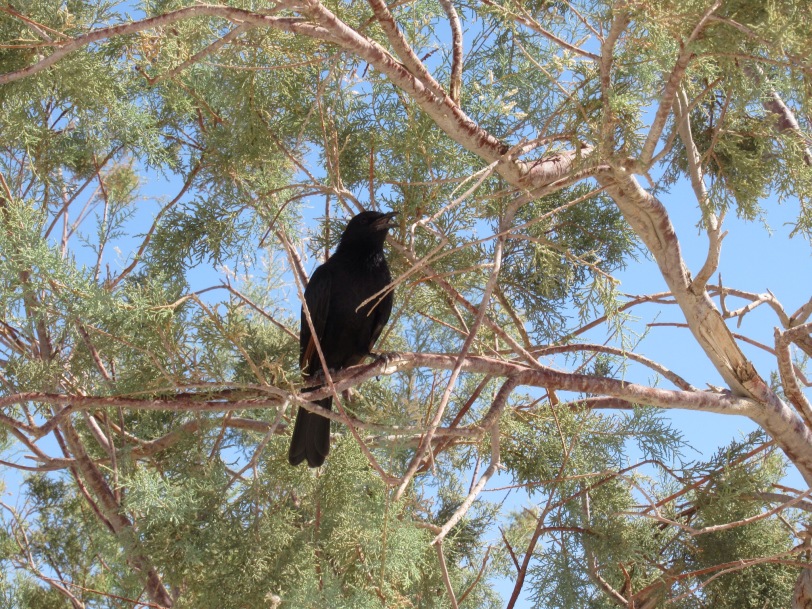 We lunched in the modern entry-museum-hotel at the base of the mountain. We chose to ride the cable car gondola instead of climbing the snake staircase that led to the top. Seemed like a good idea as we didn’t want to deals with snakes. On top we walked through the complex of palaces and storerooms while learning the story of the rebellion and the ultimate decision for the resistance to commit suicide rather than surrender to the Romans and slavery. The best American equivalent is the story of the Alamo although the Texans got their revenge much quicker than the Jews. What has to impress everyone is not only the sacrifice of the Jews but the absolute determination of the Romans who left nothing to chance and laid siege to this inaccessible fortress. The entire episode is engrained in the modern Israeli psyche and is part of their national saga. We were all impressed. 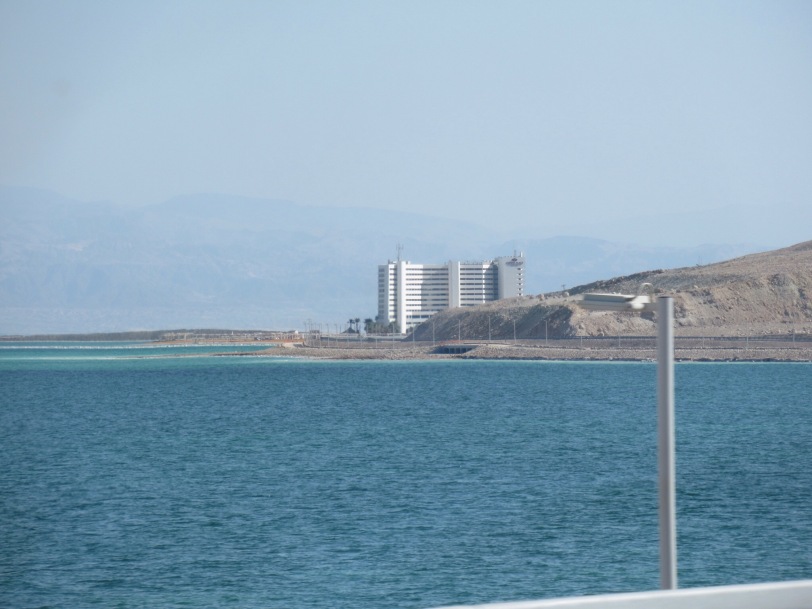 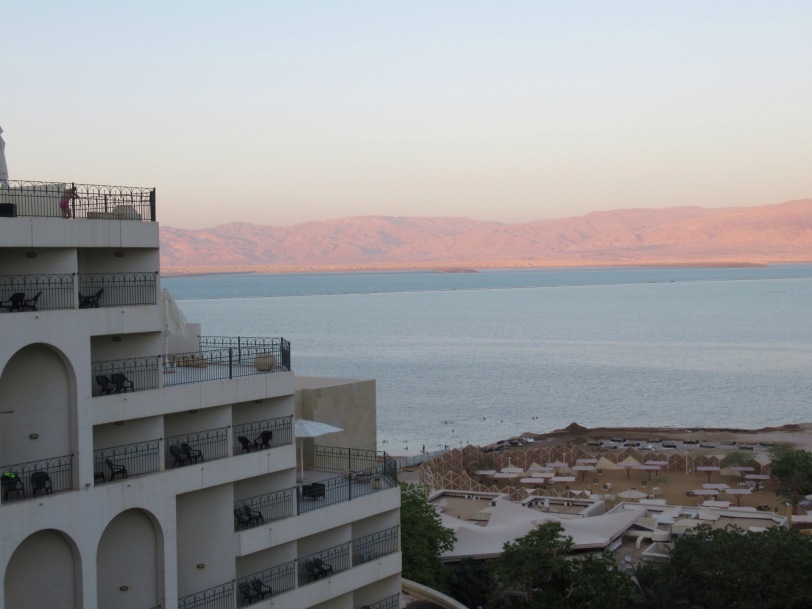 We were also impressed by our fancy hotel with glass elevators after our nice but relatively humble kibbutz resort of the last three days. The hotel area of the Dead Sea is itself facing extinction as the sea itself disappears. The plan is for everyone to take a float.

Beit-She’an/Scythopolis/Beth Shan contains the most outstanding archeological site in Israel. At the Junctionof the Jezebel and Jordan Valleys, the site has long been of strategic importance. The Roman and Byzantine ruins under excavation date back to the time of Jesus when local craftsmen would have found plenty of work building this “new” city.

The region was originally supposed to occupied by the tribe of Manasseh but the Caanaites and their chariots proved too difficult (Joshua 17:11, 16; Judges 1:27). The Philistines hand Saul and his sons from the walls of Beth Shean (1 Samuel 31:10:12) while Solomon will place it under the rule of Baana, son of Ahilud (1 Kings 4:12).

Scythopolis was one of the chief cities of the Decapolis, 10 cities that shared Greek culture and government. It became the most important city in Roman Samaria when the theatre, baths and hippodrome were all built.

We drive by the site of Jericho through the Israeli land of “milk and honey”. We will not go to the archeological sites in Jericho because the city lies within the jurisdiction of the Palestinian Authority on the West Bank. Quasar El Yahud or the Israeli side of the Jordan River is also known as Bethany. The Israeli government has established a facility for Christians to perform baptisms on their side of the Jordan.  The riverbank was probably the first place for Israeli footsteps in the Promised Land after the Exodus. There is also a Bethany near the Mount of Olives in Jerusalem where Lazarus and Mary lived.

Ein Gedi or En Gedi means “spring of the wild goat”. It is an oasis in the Judean Wilderness. Gpd rewards the tribe of Judah with Ein Gedi (Joshua 15:62). David hid here in a cave when running from Saul (1 Samuel 23:29) and David cut part of Saul’s robe when he was distracted (1 Samuel 24). Psalms 52 and 142 may have been composed here according to scholars. Solomon compares his beloved to henna blossoms growing in the vineyards of Ein Gedi (Song of Songs 1:14). 2 Chronicles 20:1-30 has the invading Ammonites, Moabites and Edomites kill each other at En Gedi to prevent their “back door” attack on Jerusalem

Masada or “the stronghold” (metsuda in Hebrew) is a natural mesa near the western shore of the Dead Sea. It is symbol of sacrifice to modern Israel like our Gettysburg. David brought his 400 men to “the stronghold” after returning from Moab – most old Testament scholars identify the location with Masada (1 Samuel 22:3-5). David will return there after confronting Saul (1 Samuel 24:22).

Herod the Great (34-4 BC) fortifies Masada and builds a winter palace. He considered the site impregnable. As Jerusalem falls to the Romans in 70 AD, Jewish patriots ( sometimes called Zealots) under Eliezer Ben Yair flee to Masada and make a final stand against the Romans. On April 15, AD 73 the Romans finally stormed the fortress and took a few women and children prisoners.960 Jews chose suicide over Roman slavery.

The Dead Sea speaks for itself. The Dead Sea is called the Salt Sea in Numbers 34:3,12 and is made part of Israel’s western border. Sodom and Gomorrah received God’s wrath (Genesis 14:3) and became part of the salty scenery. David crossed the Salt Sea on the Lisan crossing with his family escaping to Moab from King Saul (1 Samuel 22:3-5). Jeremiah compares those who trust only in humans to be like a bush dwelling near the Dead Sea in “the parched places of the desert, in a salt land where no one lives.” (jeremiah 17:6) and Ezekiel predicts that Dead Sea would become fresh and fishermen would line its banks (Ezekial 47:8-11).

One thought on “A Trip to the The Dead Sea ”