Stairs, Stones and a Job for Maclovio

Lisbon reminds me of San Francisco. Hills everywhere. Cosmopolitan. Plenty of Graffiti. Trams, funiculars, buses and trains. Beggars and street musicians. All of this in a good spirited way. Oh yes, overcast and almost drizzly

Public transportation is wonderful. From our hotel in the sticks to downtown in 20 minutes. Our car safely in its concrete bunker under the hotel. Then the walk. Old Lisbon lies between two hills. Most of the valley between the hills was destroyed by a massive earthquake and tsunami in 1755. We started our walk by climbing through the medieval street plan of the neighborhood called the Alfama. This part was saved from the ocean by its steep hill. Of course, there were stairs. 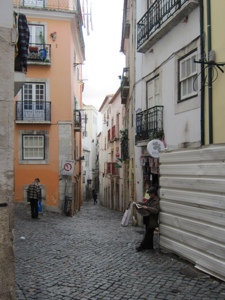 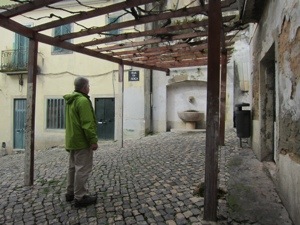 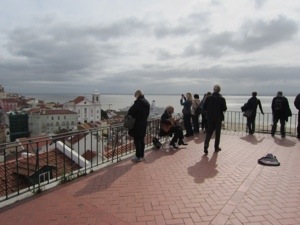 The view was worth the climb. Fun to see the cruise ship below with the tour buses parked end to end. Been there, done that. Probably do it again. Of course, what goes up must go down 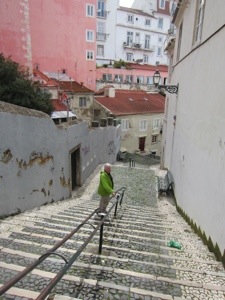 Once in the Baixa, the totally rebuilt part of Lisbon, we were on the flats. People watching and window shopping is the de rigor activity. I love pedestrian only streets. Street vendors selling chestnuts and other stuff abound.

The Lisbonians love stones. They are everywhere. Little chunks of limestone and basalt ( black and white) everywhere. Streets and sidewalks. All placed and repaired by hand. Everywhere we went stonework was in progress. All by hand! Nary a Grossman in sight ( Big Hill inside joke). The stones are placed in elaborate designs which make walking 20 or so kilometers kind of fun. 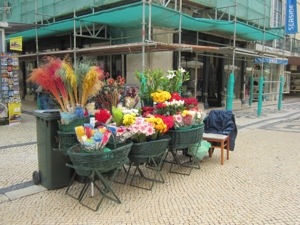 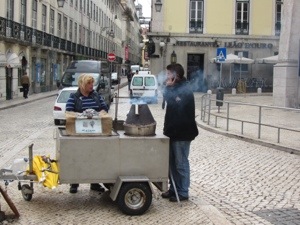 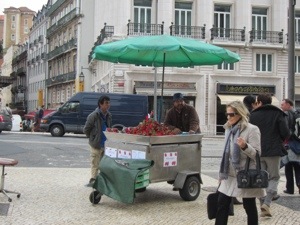 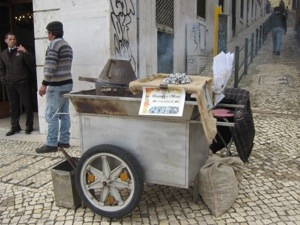 We rode the strange little funicular up one of hills. I know, we cheated. Part of the Lisbon deal 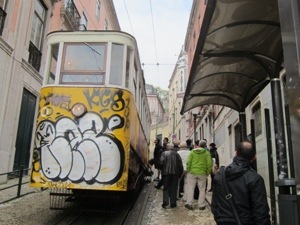 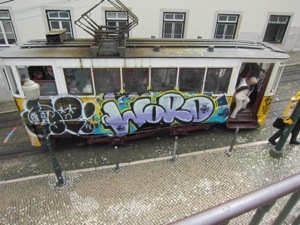 From the terrace there was a great view across to the old castle and the hill that we did climb. 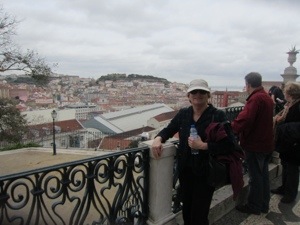 There was a guitar playing street musician that was quite good. That is why you carry coins 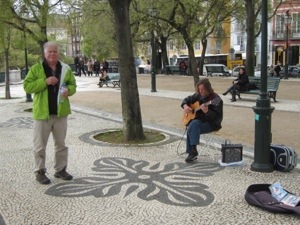 With downtown, historic Lisbon under control a la Rick Steves, we boarded a tram for a ride to Belem on the western edge of the city. It was where the Portuguese explorers and Empire builders set sail. We went to the embarkation point with a crowd staring at signs warning of pickpockets on the tram. They usually do not wear signs identifying themselves or their occupation. We had no problem. Nice folks even got out of their seats so us old people could have a seat. Almost embarrassing.

In Belem, there is a fantastic church and monastery dedicated to Geronimo, not the Apache, the other one the hermit. It was built with the proceeds from a five percent tax on pepper. In the church are the mortal remains of Vasco da Gama whose discovery of practical way to the Indies led to the creation of enormous wealth for the rulers and nobles of Portugal. Most of the bucks were used to build today’s cool palace tourist attractions. 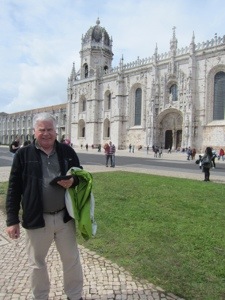 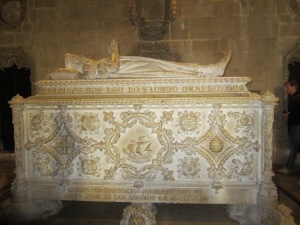 Walked over to the monument done on the 500 year anniversary of Prince Henry the Navigators death. Note: We were at his tomb in Batalha two days ago. There will be a test. 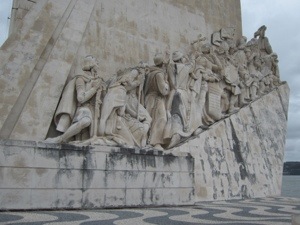 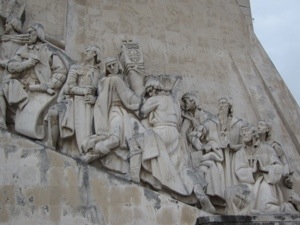 Huge monument. Henry is at the front with a caraval in hand. On the flip side is Vasco and a crowd with one guy carrying a pillory as a symbol of authority. Good news for Brazilians, Angolans and others.

Almost finally. Found a job for the mayor of Big Hill, Maclovio the Wonder Dog. This near the discoverers’ monument had a squeeze box but the big draw was his chihuahua holding a cup in his mouth. Somewhat humiliating for the dog but quite a money maker. 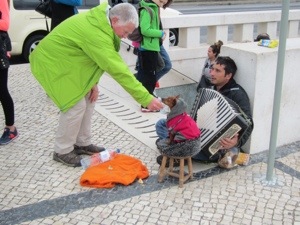 Finally, since we are housed remotely from the city and the hotel food is for subsistence only, we went shopping. Found nice sandwiches. ( We both had salads for lunch ) we then asked some police for directions to a wine shop. Seemed like a good idea. After they conferred and discussed the matter between themselves, they told us that it would mean a walk of 500 meters. Since we are obviously Americans and not the slimmest folks, they seemed quite concerned if we could make it. I guess Americans deserve the world wide reputation as slugs.

Found a delightful shop run by folks senior to even us. Got wine, strawberries and chocolate to go with our sandwiches. Back in the hotel and Good Night.

5 thoughts on “Stairs, Stones and a Job for Maclovio”