Our first stop today was Obidos. Evidently it was the ancient practice to always stake out the high ground. Here the Celts, Romans, Visigoths and the Moors were here before the Portuguese became the owners. Lots of steps and ledges. Peggy was happy. 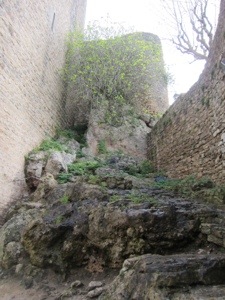 The last Moorish landlord was tricked by men hiding behind cherry trees. He could not have been the sharpest tool in the shed when he ignored his daughter’s observation that trees don’t walk. The Portuguese thus became the owners. It appears that they must have also held Grad Nights since they were dismantling a huge collection of flats and stuff.
Today Obidos is famous as a great place for weddings. The tradition goes back to when a king gave the town to his queen for a wedding present.

Next stop Sintra. Atop another hill roosts a castle beyond the imagination of Walt. In the 19th Century there was period known as the Romantic era. Women fainted frequently and men laid down their coats in the mud so their female friends could remain dry shod. Kings showed their Romantic nature by building fantasy palaces. Pena Palace was built at the same time as Mad Ludwig in Bavaria was creating Neuschwanstein. I think the Portuguese king was even more unhinged. Nonetheless, it was fun to explore. 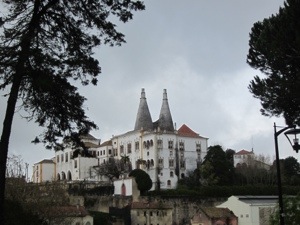 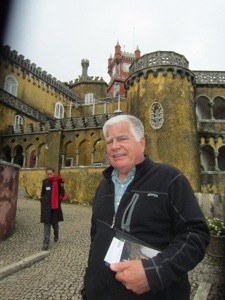 Since there were bunches of ledges and walkways designed for acrobatic midgets, Peggy loved it. I could not figure out what animal the taxidermist was thinking of when he got himself a set of moose antlers.

Check out the inspiration for the Pirates of the Caribbean’s Davy Jones.

The horses had the right idea. Stay on terra firma.

Finally found the kitchen. Great collection of copper pots. Maybe the king was not so nuts. Finally found beverage section. 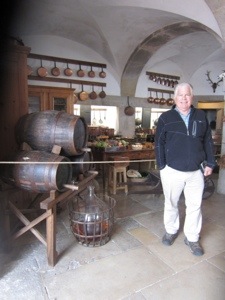 After climbing up, over, around and through castles we were finally ready for the big adventure. We got to drive Into to Lisbon and find our hotel. It is obvious that the guy who designed the palace at Sintra had a hand in designing the Lisboa freeway system. Amazing that we got frustrated but never yelled at each other and are still married.

I told the hotel clerk that the drivers in Lisboa were polite since I knew I had cut off dozens and illegally parked in intersections. She was shocked. She said nobody can drive in this city. I just told her that it wasn’t that bad since in LA they shot you for the stuff I did.

We will be on public transportation tomorrow.

3 thoughts on “Disney on Steroids”