En route to Chichén Itza after boarding our very nice long distance bus. These conveyances are certainly more comfortable than an economy seat on an airplane, However, the entertainment package leaves some room for improvement. While my Spanish is certainly limited, I can easily understand the long public service announcement about preventing communicable diseases. The storyline is about a green gummybear shaped slime creature chasing unsuspecting humans through the streets and into air passages of victims. I immediately opened an antiseptic wipe and tossed one to Peggy. The scary movie is still playing so I will turn to other topics.

We had our orientation meeting last night. There are only five of us for the first segment of the trip. Our guide Camilla studied international business at the University of Washington and in her home town of Monterrey, Mexico. She is finishing up her short career as a tour guide and moving on. She reminds me of another highly educated young woman who needed to ride a river boat before settling down. Anyway, as predicted before, our fellow travelers are Brits and a lady from Chicago who was born in Ecuador. The Tucan travel company is based in New Zealand and attracts mostly Brits and Aussies and the occasional Americans.

Essentially the company is a manager of logistics and solving problems. We stay in locally owned hotels and inns. The minimum requirement is a private bath for each room and cleanliness. Our guide is there to solve problems and guide us to making good travel choices. Last night we had the best Mexican cuisine at an affordable price. The place was packed with both tourists and locals, the Margarita was a killer so I will order the small in the future. My shaved pork and cheese “fondue” was excellent. Peggy had more conventional tacos. This is one of really valuable parts of guided tour to gamble on quality of the dining.

The travel company and guide handle all the tricky arrangements for transportation. Just making sure that we are on the right bus is a big relief. Camilla also knows where to buy stuff and how to get medical help if needed. Naturally, she is helping us with water discipline and other sanitary guidance. These things seem very basic but they are essential to keep us going instead of going.

Two bus stops so far in three hours of travel, one at Tulum and one at Valladolid. Bathrooms at both places so we don’t need to explore the bus facilities. I am not that curious. The Yucatan Peninsula is flat. The buildings all have flat roofs and the architecture is functional. The roads pass trough patches of development but mostly shrubby forest. At least from what I can see there is not much in the way of present day agriculture. I may just the routing of the highway. As we get closer to Chichén Itza, it is getting junglier.

Chichén Itza itself is not Mayan. “Mexican” Toltecs invaded the area around 1000 AD and displaced the Mayan residents in area by bloody conquest. These Toltecs brought with them a much more warlike culture than that of the Mayans. They also vastly increased the use of human sacrifice that the Mayans had practiced on much more limited basis. The Itza part of the name is from another group of warriors that arrive in the 13th Century. All of the three groups, Mayan, Toltec and Itza held great stock in the Rain God and the sacred Cenote where “virgins” were sacrificed.

Just back on the bus and heading for Merida to spend the next two nights. We now officially done Chichén Itza. Our guide Camilla turned us over to a local specialist on this UNESCO site. He took us ]to the central plaza to see the main sites. The Castillo is the central pyramid that has been fully restored on two sides. Plenty of stairs but it is no access these days. It was a good enough excuse for me. The Ball Court is the largest Mayan relic of the type in Mesoamerica. The stonework was accomplished with a high degree in workmanship. Our guide went into a great deal detail about the rules of the game. Some of what he said with certainty is a matter of archeological debate. I kept quiet. The structure is magnificent.

The “skull platform” was both grisly and fascinating. The adjacent Platform of the Eagles was a clear indication of the connection with the Toltecs. Eagles are none existent on the flat plains of the Yucatan but native to the mountains of central Mexico. Similarly, the Temple the Warriors is a clear example of the warlike nature of the Toltec-Mayan culture. The 1000 columns and rest of the temple were impressive. Like the marble of the Greeks, the colored stucco of the buildings is long gone.

It was at this point that our official guide left us with an hour to be on our own. The normal expectation is that we would occupy our time amongst the myriad of handicraft vendors. However, I knew there were a number of other structures to see. We wandered through vendors lining the pathways that led to what I consider to be the most interesting structures in the immediate complex. The Caracalla is a round observatory structure atop a truncated pyramid. Very unusual. We continued to stroll where few tourist venture to Nunnery and the Church so named by the Spanish priests. This was probably wishful thinking, but the church retained much of its original highly decorative stucco exterior.

By this time bathrooms were on the mind. We returned to the meeting point where the Banos are and found our guide. Returning to the bus with our luggage went smoothly now we just need to survive the road with a thousand speed bumps. Time for a bouncy nap.

Just woken from my nap by a guitarist who joined the bus journey to serenade us with a few sons between stops. Of stops, there are almost as many as the bumps. The bus is the local with planned stops in every town and village. The hundred kilometers or so between Chichén Itza and Mérida is two and half hours. This is no chicken bus but it has the same feel without poultry. Part of the deal I guess. 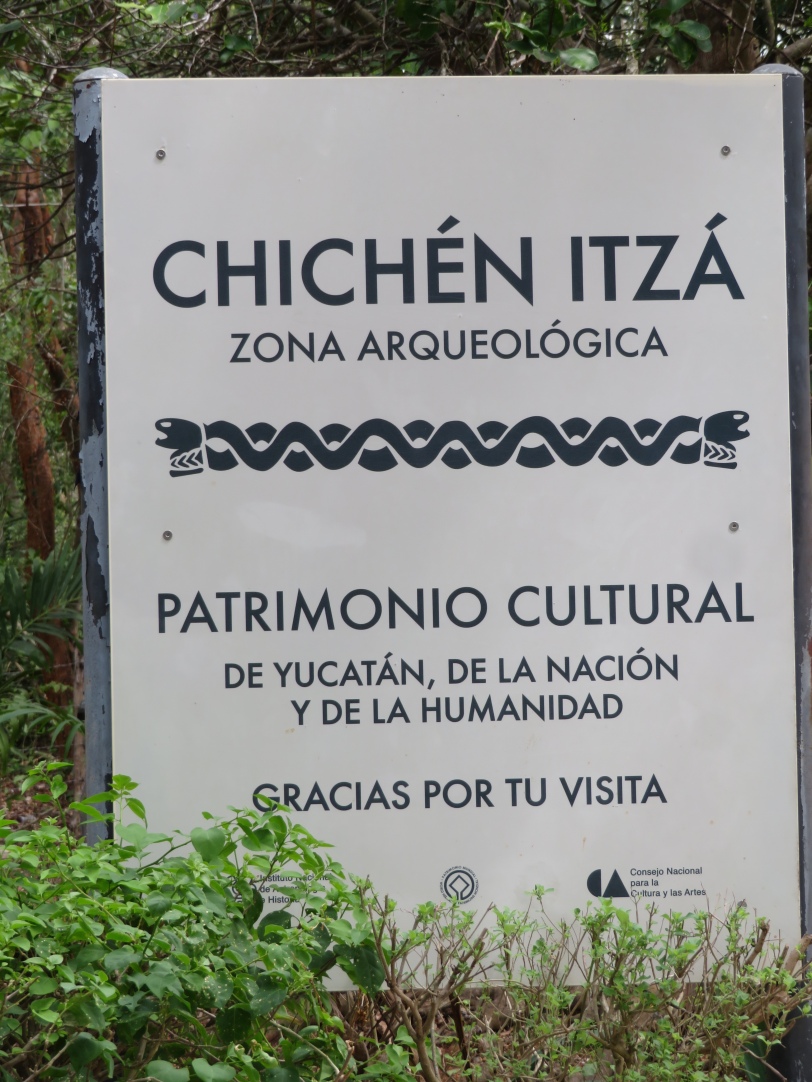 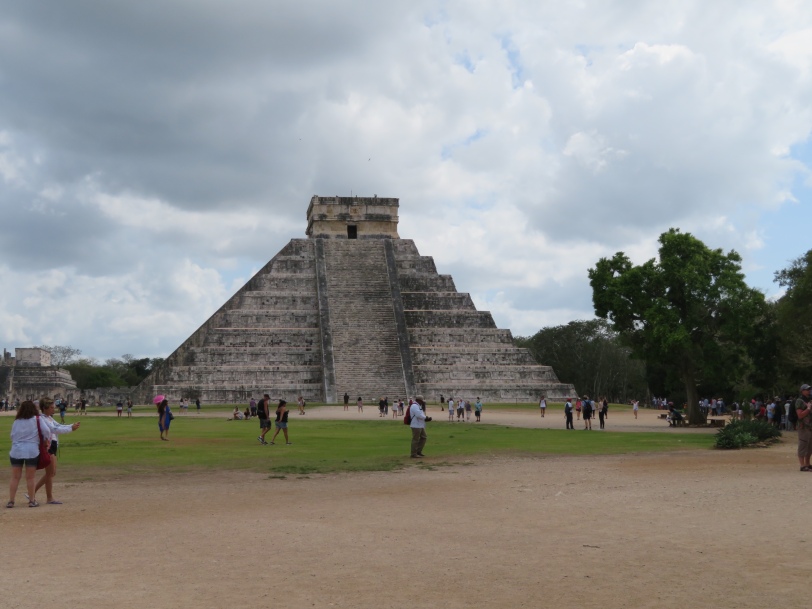 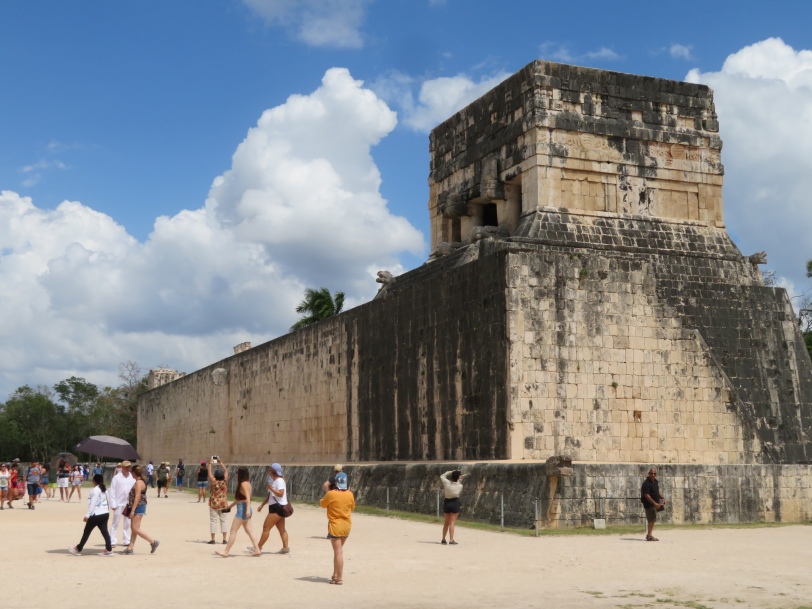 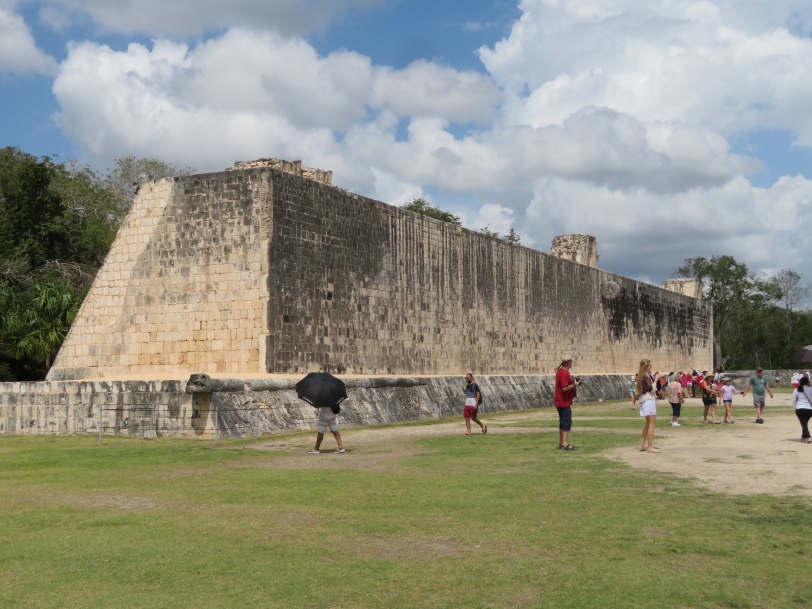 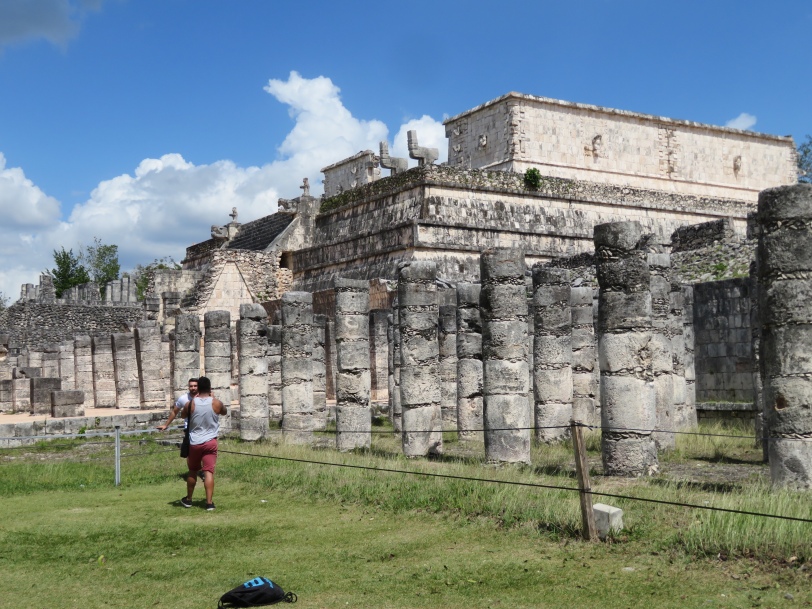 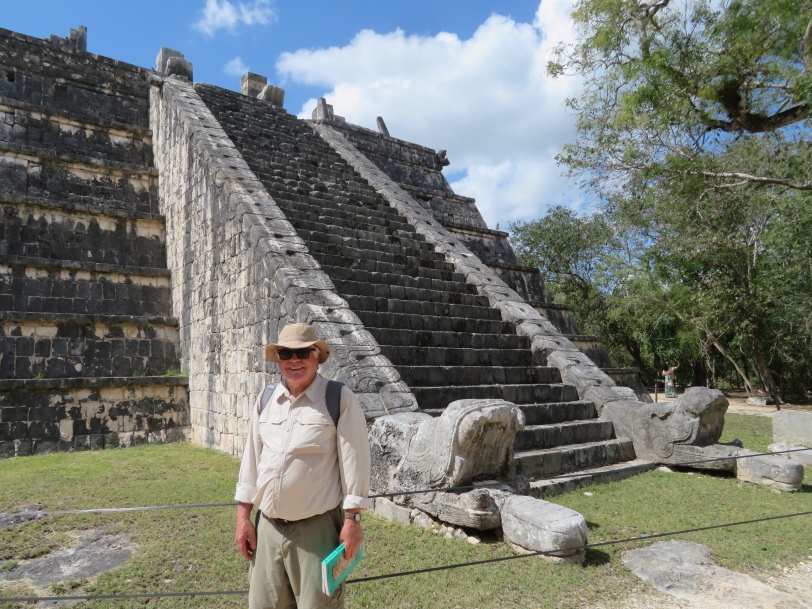 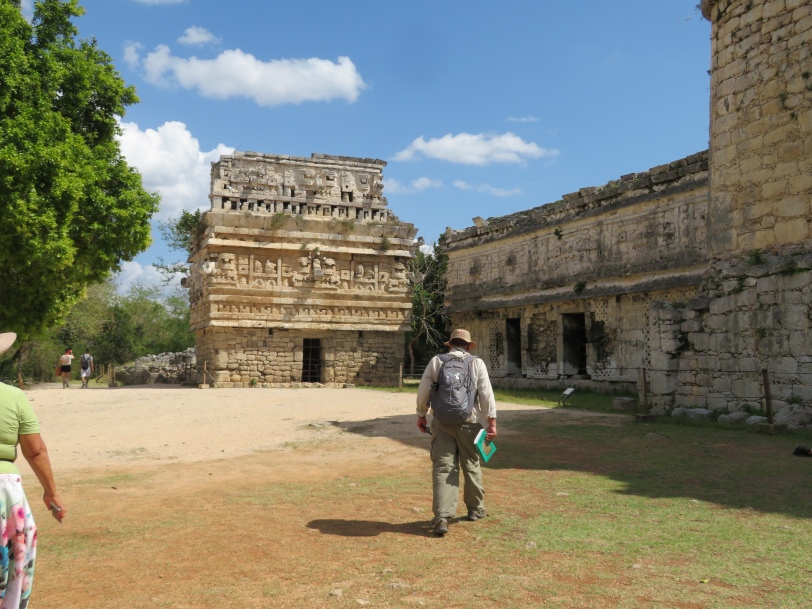 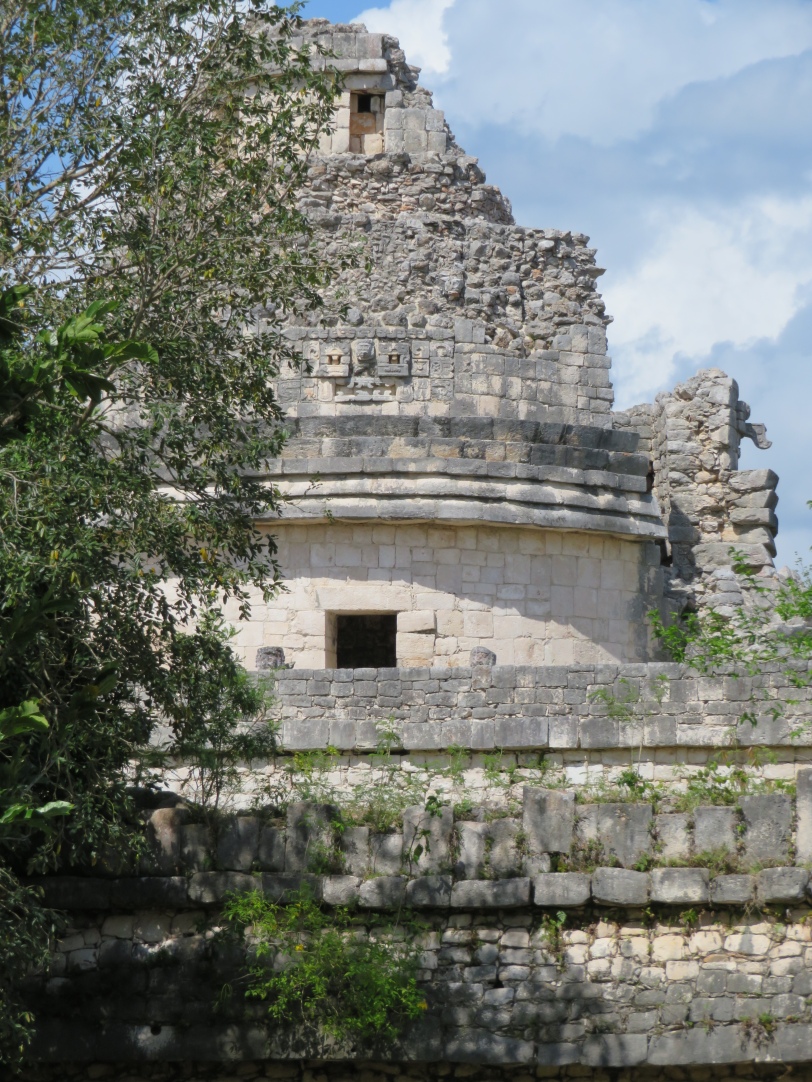 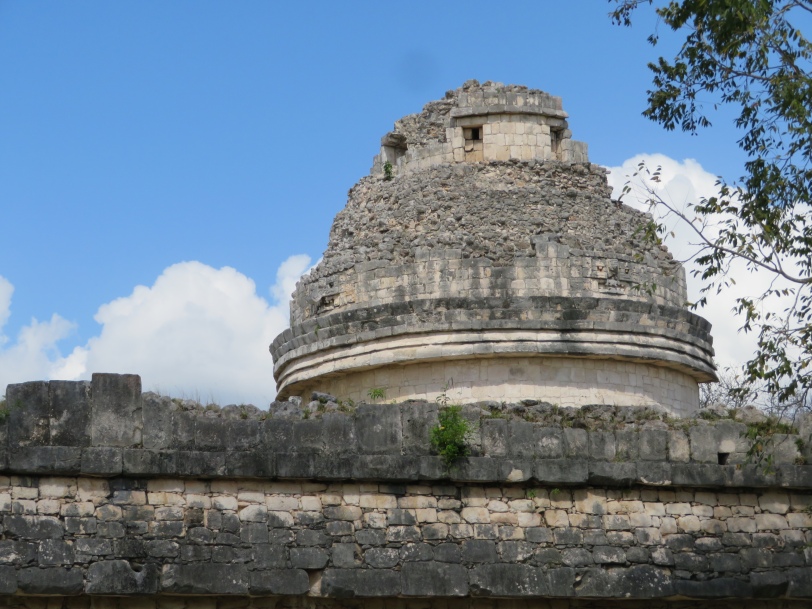 3 thoughts on “Chichén Itza and Busrides”