After consuming the world’s largest hamburger last night, we decided to take a short Italian trip and visit the Romans. We left Slovenia on a nice country road and eased into Italy. We visited the tiny town of Aquileia that was once one of the largest cities in the world. In the 2nd Century, it boasted 100,000 residents. It was in the Roman big leagues. 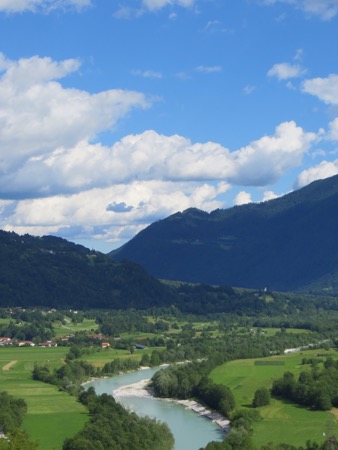 A few things happened to the place that took it down a notch or two. The city sits 4 miles from the Adriatic and the river that went to its docks disappeared much like what happened to Ephesus. Also, it was visited by Attila the Hun in the 5th Century and the Lombards a little later on. 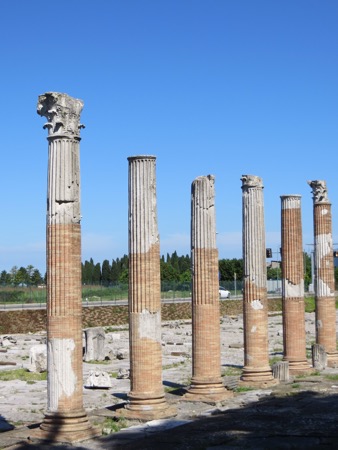 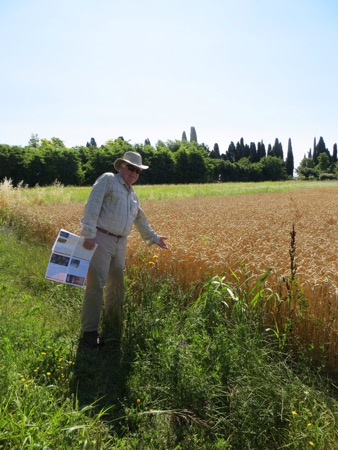 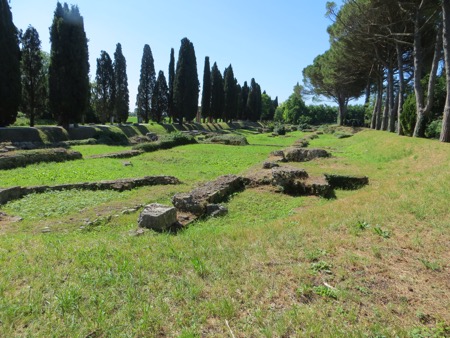 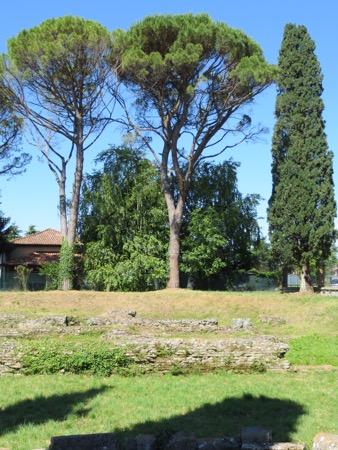 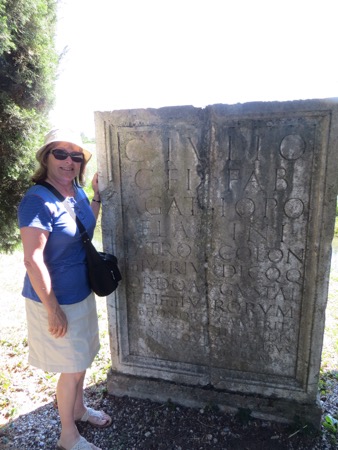 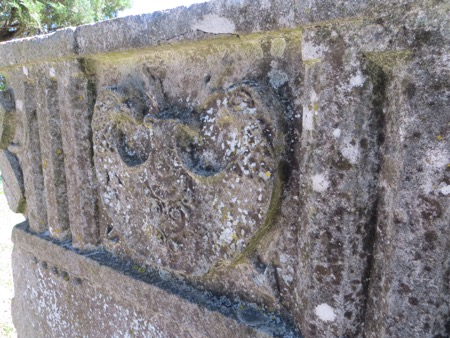 Attila burned the place including its 4th Century church to the ground. That church dated from just after Romans adopted Christianity as the state religion in 314. Local legend has it that St. Mark began the local church on a missionary trip from Alexandria. Anyway, the city has some of the earliest and important Early Christian artwork anywhere. The 4th Century mosaics were hidden two feet under the floor of the existing 10th Century Basilica. The older mosaics have been uncovered. We just had to navigate over the glass floors that now protect these priceless tiles. 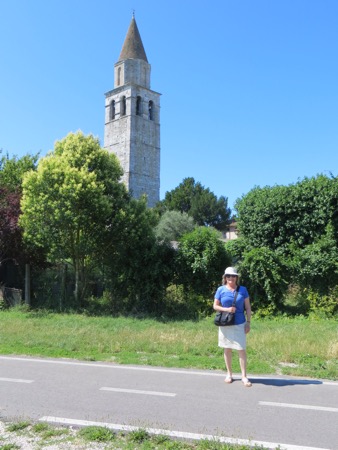 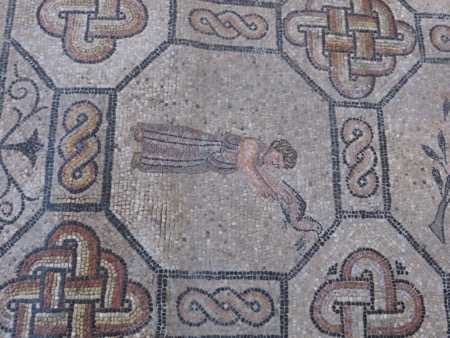 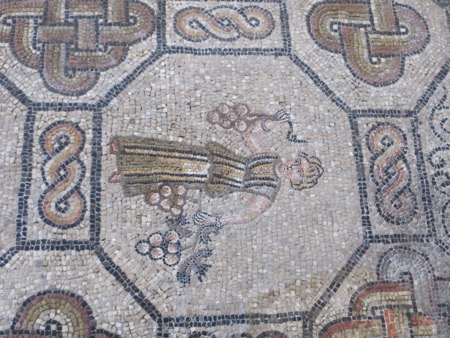 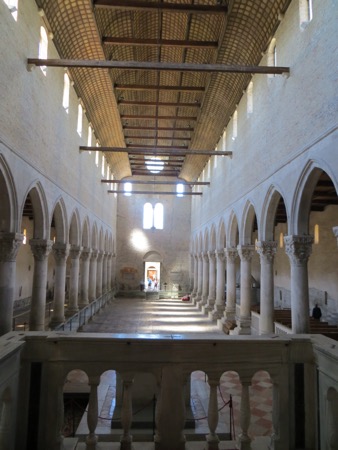 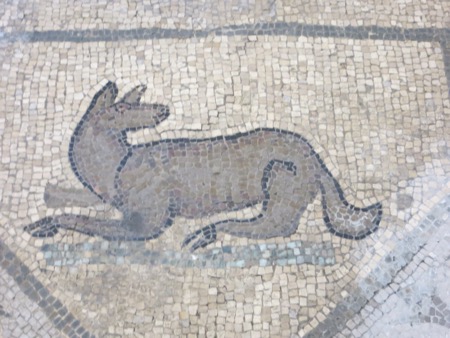 Kia had a Roman ancestor

Naturally, the further you dig the more you find. Below the floor burned by Attila’s fire lie mosaics from a Roman villa. The whole place is a bit topsy with all of the ground water and movement over the last 20 centuries but it is easy to see the beauty the artisans had in mind. 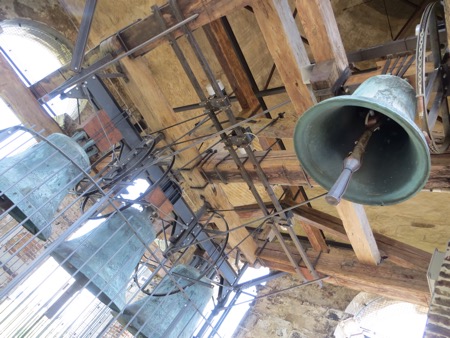 Speaking of digging, there is still a lot to do. The ancient city had a hundred thousand souls that lived somewhere. The city has only a few acres excavated. There are many a summer internships out there. We did walk through the Forum that is uncovered. The other half is under a road. The abandoned river port and quays runs hundreds of meters. Of course, we walked and examined almost every remaining stone. Much was removed in the Middle Ages in attempts to keep out unwanted guests like the Magyars.

By 1000 the city was ready to build the basilica that stands today. It is graced by a campanile or bell tower. It made Peggy’s day. I figured it would stand one more day. Besides, it did not have wormy, wooden stairs. Good old stone. much of it was repurposed Roman stone. The baptistry lacks a roof but the tub could hold a sizable congregation today. My pastor would be happy.

We headed in the direction of a small town north of Aquileia that had not been discovered by tourists. Unfortunately we got there during siesta. Everything was closed including the wine caves. Maybe next trip. We headed back to Slovenia and headed for Nova Goriza where we would spend the night. 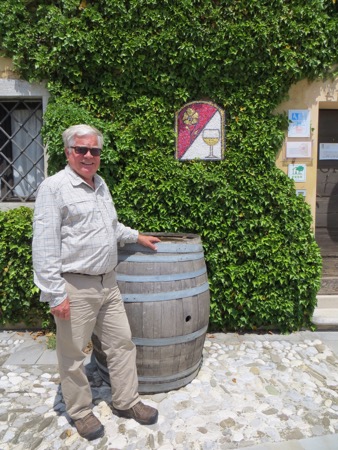 Our rural guest house has everything we need to get ready for the cave adventure tomorrow. We even walked a few hundred meters to a wine bar that served excellent local wines. We got the full tour and enjoyed ourselves. Our home tonight has a complete restaurant so we won’t venture far. 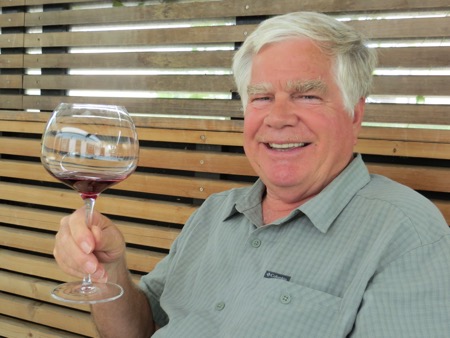 The guest house includes a petting zoo with goats and geese. We may end up eating some of the zoo tonight.