This could easily be called “A Palace too Far”. We awoke to a bright sunny almost perfect day for walking and touring. We grabbed a pastry and a coffee from our neighborhood bakery and headed for the bus stop to take us to the San Souci Palace. We needed to wait a while for things to open up but I was determined to see it all ala Clark Griswald. Since I had complied with all the regulations, things went smoothly and we were amongst the first  to enter Frederick the Great’s favorite palace. 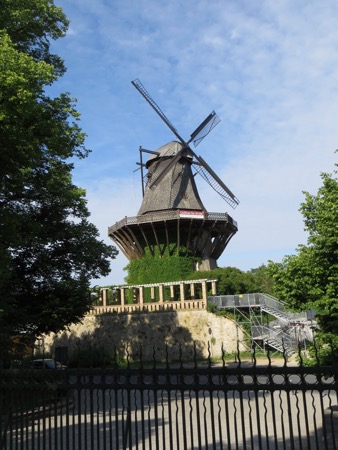 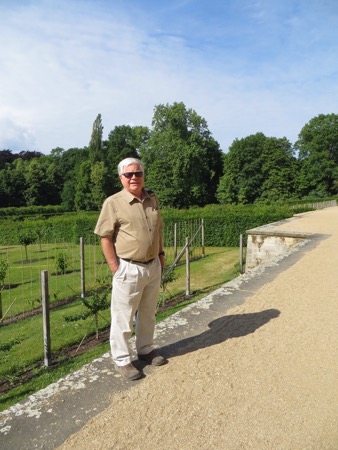 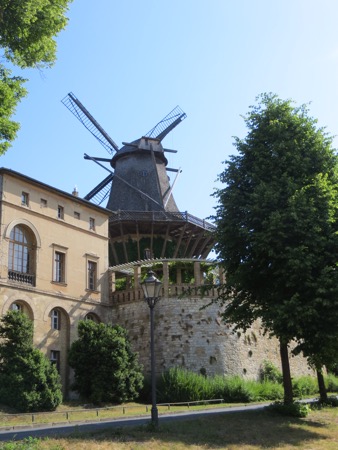 A quick history review is in order. Frederick the Great joint Joseph Ii and Austria and Catherine the Great of Russia as the three most important Enlightened Monarchs of the 18th Century. Fred inherited the position as King in Prussia from his semi-estranged Dad. They had a falling out when Fred and his friend ran away. Fred was punished but his friend was decapitated by Fred’s Dad in order to make a point to young Fred. Frederick toed the mark and eventually became king himself. We could spend an inordinate amount of time speculating on impact of this trauma on his later life. instead let me describe what we saw.

San Souci or “Without Care” was built in three years following his first defeat of the Habsburgs who were ruled by a young Maria Theresa. He celebrated his enlarged kingdom by building a get away from his dreary Berlin Palace that he shared with his wife on occasion. They had no children. This is probably because they only saw each other once a year and never shared a bed. As we walked through the rooms of his palace, we learned a bunch about the greatest of German kings.

Despite being a king who regularly used war to achieve diplomatic goals, his interests went far beyond the battlefield. In the course of his life he composed some 100 sonnets for the flute which he played. The Bachs were court composers and music was performed almost every night. His main entertainment was dinner conversations with the seven to ten guests who shared almost every dinner. He needed additional rooms for these guest who included Voltaire who enjoyed the king’s largesse for years. In fact Frederick preferred to speak French over German. He was also fluent I six or seven modern languages. He arose at 4AM to get with work after spending the night on an iron bed with no mattress in the company of his favorite dogs. Despite this strangeness, I do like the guy when I found out that his name for the palace was the “vineyard”. He planted grapes on his terraces and made thousands of grapey decorative elements. In fact, guns and swords are rare in his palaces. He preferred references to music, poetry, love-making and a love of nature. 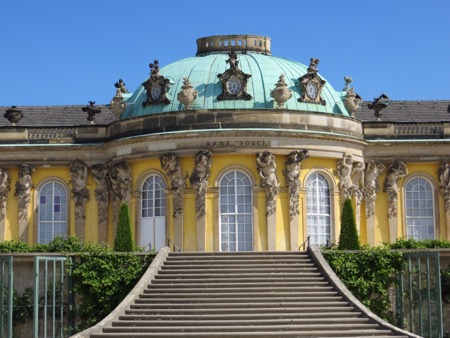 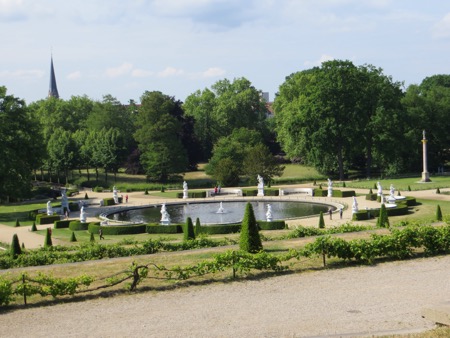 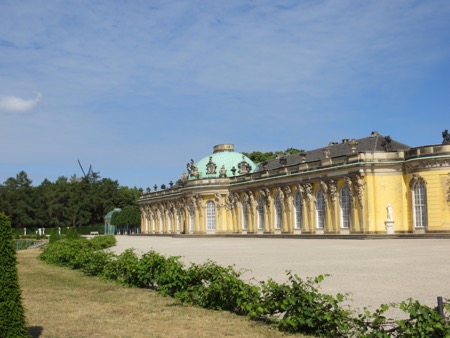 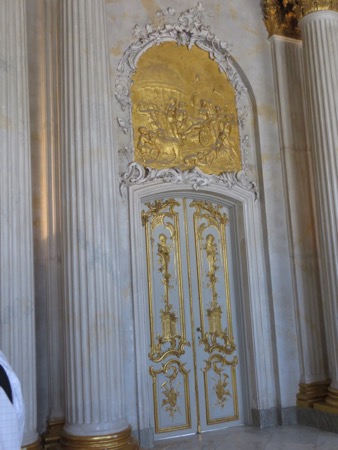 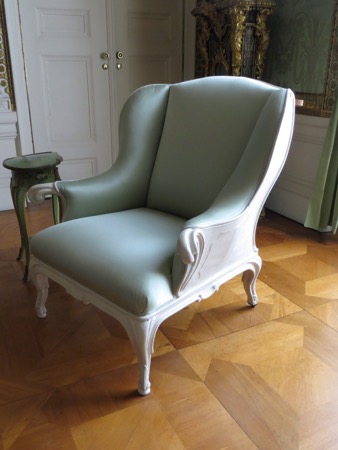 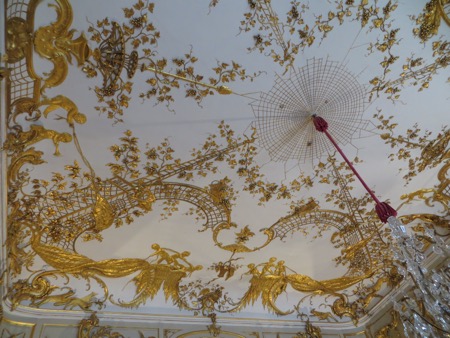 The room he provided for Voltaire was my favorite with the monkeys and herons. 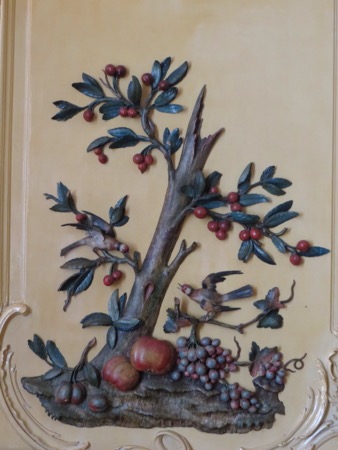 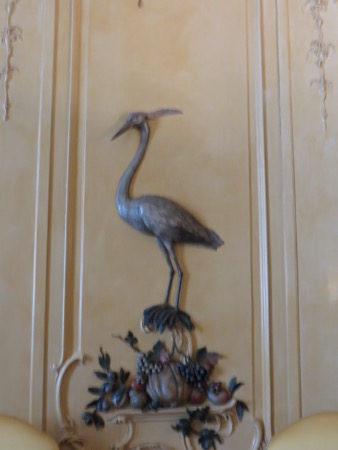 After an enjoyable hour or so in this palace, we headed to the Neue Kammern or New Rooms that were built to meet the needs of his many guests. They had there own reception and entertainment areas along with bedrooms and apartments. 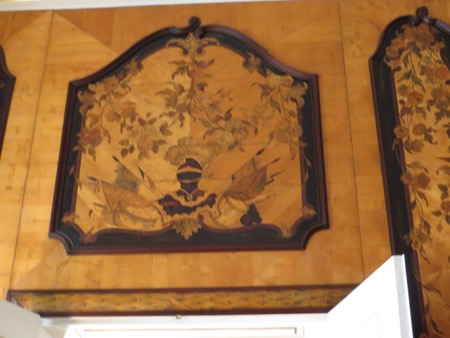 We walked through some of the gardens to reach the Orangerie. Essentially this palace was built to house the exotic plants that Frederick was so fond. It is being reconstructed and there is plenty of scaffolding covering the place. We still got to wander through plenty of rooms with numerous copies of Italian art. In fact, you can not help but get the impression that the Prussian kings preferred French and Italian culture and architecture to that of Germany. It is to bad that Wagner changed all that. 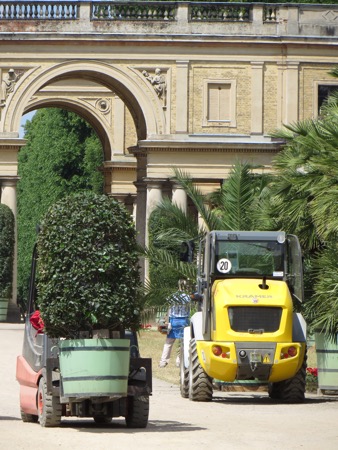 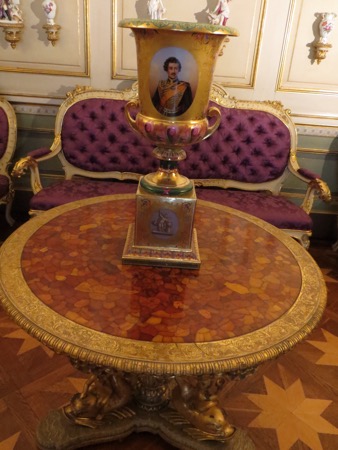 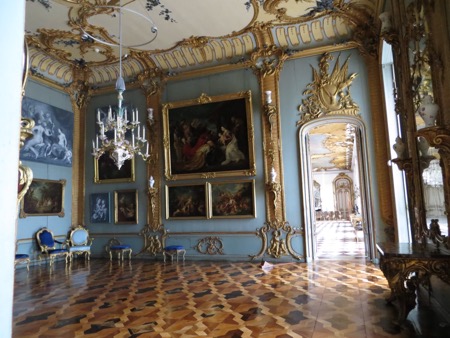 We ate a quick picnic lunch on a garden bench and caught a bus to the Neues Palais or New Palace that Frederick had built after surviving the Seven Years War (1756-1763). He built this extravaganza that unfortunately was not as high on the restoration list after WWII. The Germans are plugging away at it but it is still impressive even with the ongoing rehab. I liked the workmen playing John Denver while they plastered and painted. 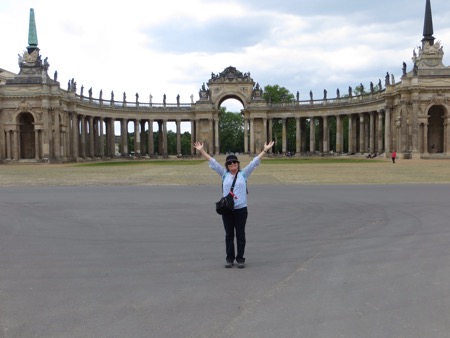 We trucked on to the Charllotenhof that was mercifully downsized by Frederick IV who greatly admired Italy. The home he shared with his wife was livable. I even liked the indoor tent that was inspired by Napoleon. I guess this amounts to “Glamping” or Glamour Camping to paraphrase Sunset magazine. 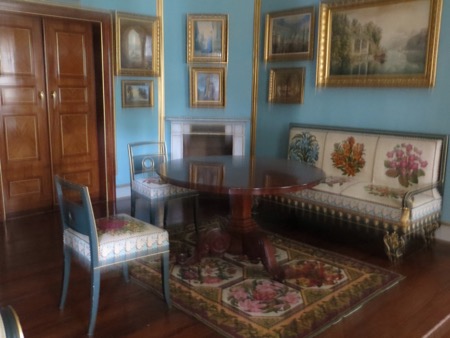 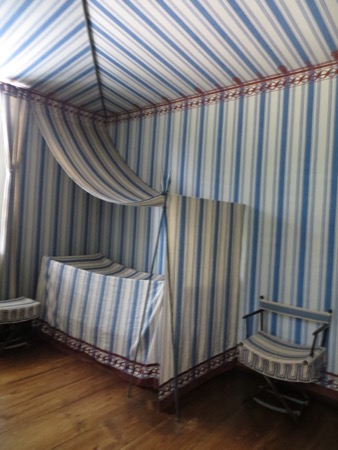 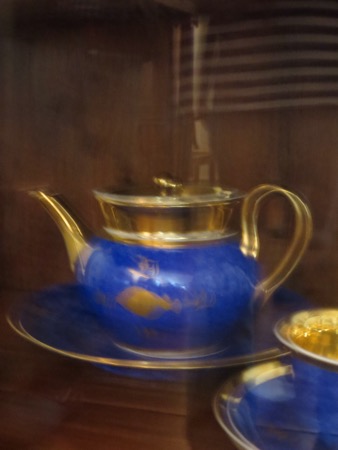 We were not quite done. We found the Roman Baths with the Pompeian style decorations and mosaics. The originals were much better. We even found the China House that reflected Frericks fascination with Asian culture. The building was designed like the circular temple of Heaven in Beijing. The gilded statues surrounding the building looked nothing like Chinese but I will cut him slack. I loved the Chinese monkey playing a horn and Peggy liked the China. Luckily we were not the ones to set off the sirens by touching the gold leaf. 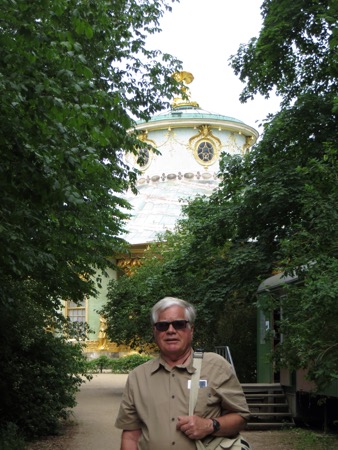 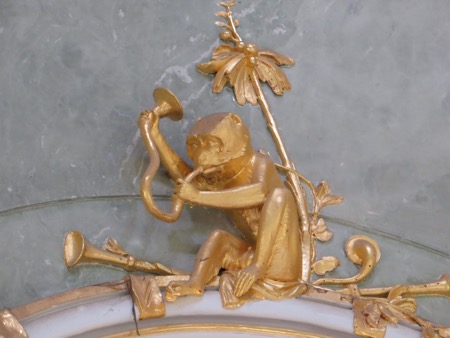 We finished our expedition to the church where Frederick William IV and his wife are buried. the church contains an apse mosaic that was repurposed from a church that was scheduled to razed in Murano near Venice. The entire edifice belongs in Italy. It was quite serene. 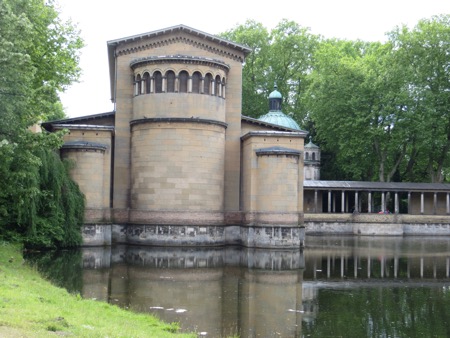 Speaking of serenity, we are both done for the day. And here is a picture of the Potsadam one day palace pass that is guaranteed to do you in. Also, these pictures are only a small sampling of the day’s efforts. Anyone for a slide show?

2 thoughts on “Cinque Palaces in Potsdam”