Left cloudy Lubeck around 8:30 and reached mostly sunny Potsdam by noon. Our hotel is very nice and located right next to the triumphal arch erected by Frederick the Great. We don’t always stay in Four Star places but the price was right and we don’t have kids with us. 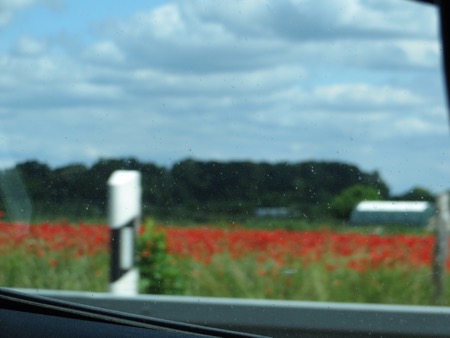 Our hotel for the next three days

The pig is part of a vegan protest.

Potsdam is a 45 minute train ride to downtown Berlin. I decided to try to see some of Fred the Great’s palaces here in Potsdam. It was a bit of a misfire. One palace was closed and the other issue was a technicality over discounts. After one large beer, I am over my irritation with German rules. We’ll return to the Potsdam palaces tomorrow after reading all the fine print in their rules. We therefore decided to tackle Berlin. 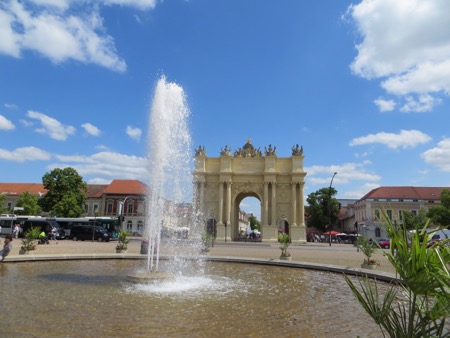 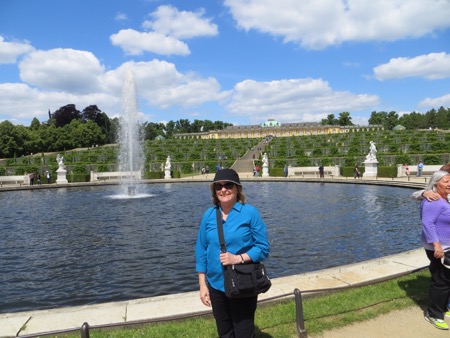 The train ride in went well and we walked most of the way to the Brandenburg Gate from the train station. It is still an effective backdrop for American Presidents although the line to get into Madame Toussand’s Wax Museum was much longer. I can’t remember if the horses on top are original or in Paris. Anyway, the sight brings back plenty of memories and speeches. We needed to strike out for Checkpoint Charlie. We probably walked more than we had to but we found it. Actually we found a tourist trap with what I believe is a replica check point festooned with guys wearing American uniforms that offer an opportunity to pose with them. The area is full of souvenirs, tourists and tripe. Peggy was moved more than I was. She couldn’t believe that I had gone through there in 1966. At that time the East German authorities allowed a group of American college students to cross the “border” so that we could see the memorial to the heroic Soviet forces that got rid of Hitler and protected the Germans from Americans. 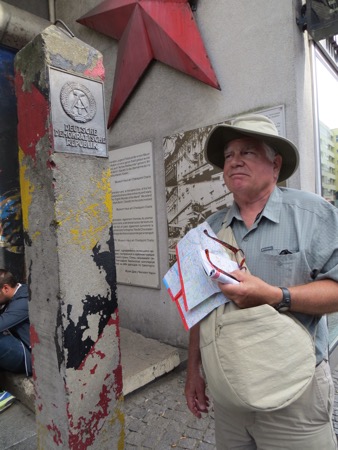 After starting to figure out Berlin mass transit we managed to ride most of the way to the Holocaust memorial near Brandenburg Gate. The rectangular, undulating dark concrete blocks are eerily like a giant graveyard with no distinguishing marks. I was more affected by Auschwitz, but I am glad the Germans built this moving memorial. 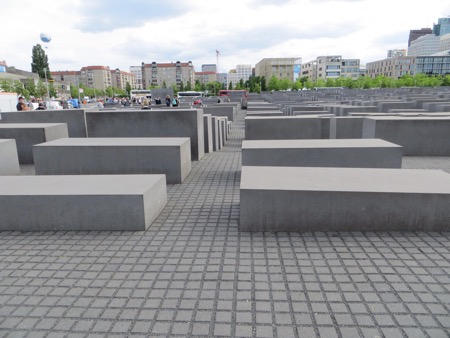 We had a long but entertaining ride back to Potsdam. We had purchased three day passes. They were finally checked by one of the undercover ticket checkers. She looked like a double for Dog the Bounty Hunter. She was just doing her job. I am glad our tickets were good otherwise I would have been tossed on the tracks. Anyway, we have pretty well figured out how to read the route maps for the buses, trams, subways, and train that crisscross the area. We also found out that you don’t want to get in the carriage with the bike symbol. Anything goes on that car

I am writing this onside at a restaurant. It is quite pleasant. Tomorrow we will find out more about Sans Souci.