The first and only Qin Emperor unified China around 200 BC. He decided to go out in style. His leaving this earthly orb was probably expedited by his love of mercury. His physicians advised him that a steady dosage would help him deal with his 3,000 concubines. His reign saw the creation of a uniform system of weights and measures, money and writing. He also was merciless in driving his citizenry to create the Great Wall, the beginnings of the Grand Canal and his massive tomb complex.

The tomb was unknown until 1974 when a local farmer decided to dig a well. Fifteen feet down he discovered spooky looking Terra Cotta heads. By 1980 a museum had been established to protect the excavation and display its wonders. We met the actual farmer and he autographed our newest coffee table book.

The excavation of the 1000 or so soldiers of the Emperor’s army of 7,000 are under roofs sheltering the diggings from the elements. The collection is massive as are the crowds. Despite the numbers of visitors, we were able to see everything that we wanted to see. Our guidebook said that no pictures are allowed. It needs to be updated. Museum guards calmly watched as million of pictures were snapped. I was surprised to see the allowed use of flash photography of soldiers with remnant color. We refrained from the practice and I think we did OK.

We wandered through the three pits that are accessible and saw plenty. The Chinese archeologists have ground radar scanned the actual tomb of the Emperor and have determined that it remains un-plundered. Perhaps it was the level of mercury that contaminated the soil or just plain old superstition. The government has not announced any plans for its excavation. Should make Tut seem small potatoes.

We managed to do a little souvenir shopping while in the museum complex. Haggling is a great sport. I am sure our kids will appreciate our hard work.

After leaving the museum we stopped for lunch at another Western Chinese culinary tradition – noodles. The food was piled up in front of us. After 15-20 plates of different items, we were served giant noodles. We saw a demonstration or the proper noodle stretching techniques. It was great fun. We then go to hug replica soldiers and returned to the bus. One of the replicas would probably look good next to Maclovio in our front year. 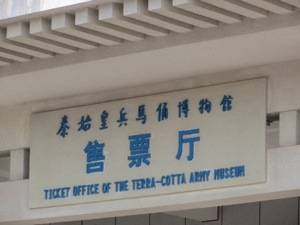 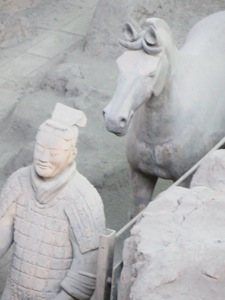 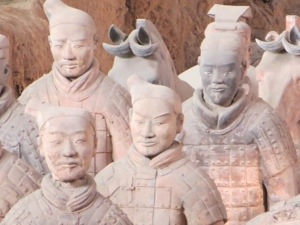 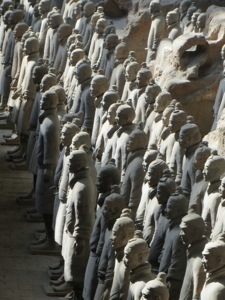 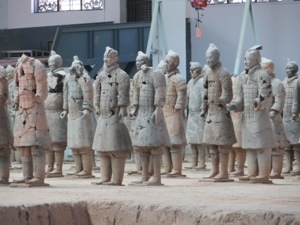 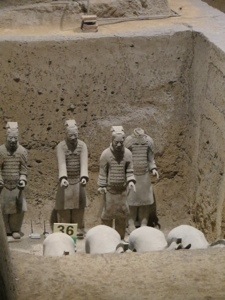 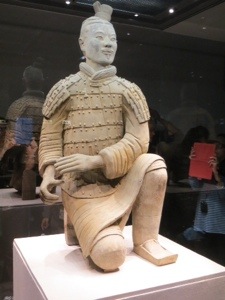 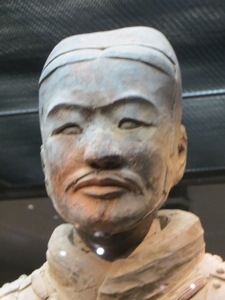 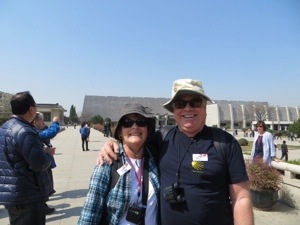 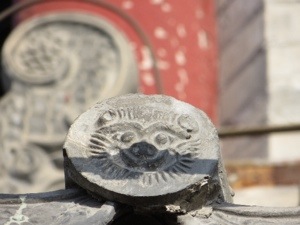 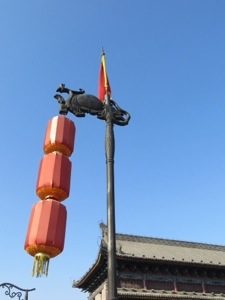 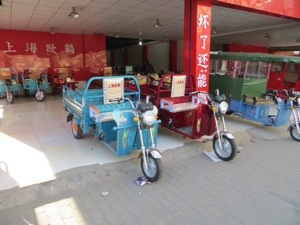 After returning from the museum, we decided to walk to the ancient city walls. We went on our own. Crossing streets in Xi’an was hairier than Rome. We used little kids and old ladies for blocking whenever possible. Since Xi’an was the eastern terminus of the Silk Road, it was appropriate that we walk our own road. Quite an adventure.

Made it to the wall and climbed some stairs. The walls have been recently restored and reflect the configuration from the Ming dynasty. They are popular for jogging and biking. We did not walk the entire 8 Kms. Had fun posing with some teenage kids at the big bell. Who says the Chinese are not friendly. Actually, we have found them to be very outgoing. The teens spoke a few words and I told them that I was Brad Pitt’s brother. They giggled. Made it safely back to the hotel after almost being hit a number of times by the Ninja electric scooters which are absolutely silent and drive through the pedestrians without slowing down. Took pictures of some of the cute ones. Would be useful on the Ridge.

The day was not over. We changed and got ready to go out to a dinner show. This would not be the usual. The theatre is know for its accurate depiction of historical costuming and music. During the elaborate dinner that included plenty of the Chinese rice wine ( not to be confused with its cousin Japanese sake) we were entertained with women performing ancient music on replicas of ancient instruments. The only disconcerting part was their rendition of Red River Valley. Not sure why they wanted to break the spell.

The performances utilized the same ancient musical instruments and scores. The dancing and costuming put Vegas to shame ( not that I am any authority on Sin City entertainment). It was glorious and I hope the pictures and video reflect some of the grandeur. We even saw the arrival of the Tang Emperor. Oh by the way, the Tang Dynasty ruled from roughly 600 to 900 AD. Europe was in Viking disarray. Xi’an or Chang An as it was known was the capital city with a population of between 2 or 3 million at a time when Paris was a burg of maybe 10,000. We returned to our poorly air conditioned palace to tired to care. Tomorrow Beijing. 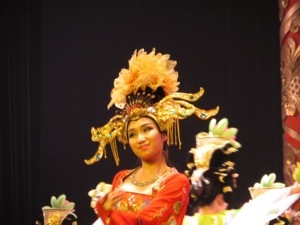 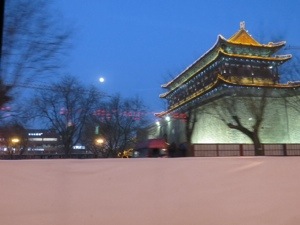 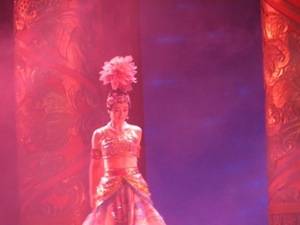 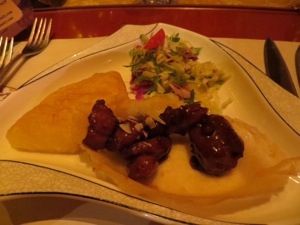 3 thoughts on “Terra Cotta, Noodles and a Tang Good Time”