As previously stated, as you wander around the small towns of the south looking for clues about your ancestry, there is a certain protocol. Since all of my family were Northerners and even quite a few were Yankees, it is critical to be careful about sensitivities. While many of the Brysons resided in close proximately to the filming location of the iconic movie “Deliverance”, we certainly did not meet anyone that would cast for the movie. We met friendly and helpful folks who were happy to see us looking at our shared past. It did not hurt to emphasize Peggy’s almost 100% Southern ancestry. The story of Jesse Monroe, Peggy’s Great-Grandfather exemplifies this Confederate heritage.

While Jesse’s enlistment in the Confederate army is not unique in the family like the example of the George E. McKenney, his experiences are documented in one of the few Confederate regimental histories written by an enlisted man. W. H. Andrews, 1st Sergeant, Company M of the 1st Georgia Regulars who wrote about his war experiences in the same regiment to which Jesse belonged. I will be using his book, “Footprints of a Regiment” 1891 as a reference. I would encourage any civil war reader to read his memoir.

Jesse is one of twelve children born to James and Lydia Bryson. Jesse is born in Union County in the extreme northeast corner of the state of Georgia. It is not clear where his place of birth is located although his mother’s family the Berrong’s are presently scattered around the resort town of Hiawassee. Hiawassee lies to the immediate north of Union County in Towns County on the Tennessee border. But there are no Bryson family records recorded in Towns County. Jesse’s parent Lydia and Andrew move west to Whitfield County, Georgia. The reasons for the move are unclear but probably connected to the availability of suitable farming land.

Jesse is living with his parents near Tunnel Hill, Georgia when war breaks out in 1861. Jesse enlists on the 28th of February, 1861 at the age of 15. The 1st Georgia Regular Infantry Regiment is officially organized on March 1, the next day. I guess Jesse was eager to join the fight or to have an adventure. These motivations are the same that have been depicted in countless movies about the war between the states like “Gone With the Wind”. What is clear is that slavery was not a family issue. There had been no known slaves in the family since his Great-Great-Grandfather who owned one slave in his old age in South Carolina. The northern region of Georgia where Jesse lived was a place without many slaveholders. Most of its occupants were independent farmers.

Enlistees from all over Georgia were transported to Savannah in the southeastern part of the state. Jesse’s experiences as a 15 year old recruit must have been harrowing. Sickness was rampant in many of these camps but Jesse seems to avoided serious illness including outbreaks of measles. The regiments first assignment was at Fort Pulaski where the recruits got used to a diet of hard sea crackers, pickle pork and yankee beans. On May 1 the regiment was divided into 12 companies of 66 men (roughly 800 men) The author Andrews (I will use this name in the future) is placed in Company M while Jesse found himself in Company H. The Regiment then took up position on Tybee Island at the mouth of the Savannah River. Their rations now consisted of 3/4 pound of bacon and a pound of crackers and crabs that they caught on the beach on this sandy island. Active duty was soon desired instead of being lunch for the mosquitoes and sand flies. The Yankee blockade boats were just offshore but nothing happened until the 16th of July when the regiment was ordered to Richmond, Virginia. They would finally be able to leave the boredom and bugs behind. They receive new uniforms of Confederate gray, muskets and a regimental flag and on July 20 depart by train for Charleston. They reached Richmond on the 23rd and reached Manassas Junction, the site of first major Confederate victory at Bull Run.

The troops appreciated the quality of food that was available in the Old Dominion and had time to visit the battlefield at Bull Run as tourists. By September 17th they are on picket duty near Munson’s Hill some seven miles from Washington and finally receive some cannon fire from the Union side. Mostly the troops endure camp life with its fighting and discipline. By October they are building winter camp where disease is the primary enemy. All await the spring to see what the Union Army under General McClellen will do with his 200,000 men. The 1st Georgia finds itself in Yorktown by mid-April but found themselves out maneuvered by the Union forces and defending Richmond. The Seven Days fight ended McClellen’s siege of Richmond. Our Regiment attacked the Union works at Nine Mile Road and suffered its first battle casualties. At Malvern Hill the Regiment continued to lose men but the Union forces were in retreat.

The Union General Pope challenged the Army of Northern Virginia at the Second Battle of Manassas in Sept, 1862. The 1st Georgia lost 104 men dead and wounded of the 194 at the start of the battle. The attrition is obvious since they mustered in with almost 800 men 18 months before. The Regiment is soon on the move through the Blue Ridge Mountains to meet the new attack by McClellen at Antietem or Sharpsburg, if you prefer the Confederate name for the battle. There were not more than 50 men in the 1st that could muster. As part of General Anderson’s Brigade, they were positioned to the left of Stonewall Jackson’s troops and forced the Union line opposite them to retreat. The exhausted Rebels were ultimately to leave the battle field in the possession of the enemy allowing McClellen to claim victory and President Lincoln to issue the Emancipation Proclamation.

Winter camp in 1862 finds the 1st camped below Fredericksburg. In December, the Union forces now under Burnside committed themselves to large scale suicide in their charge against the well entrenched Confederates above Fredericksburg. The 1st is so depleted that it is released from the Army of Northern Virginia and sent back to Georgia after some 14 engagements after leaving Georgia. In January the 150 survivors board trains for the south and reach Macon by January 13, 1863. After brief furloughs and winter camp, the Regiment is transported to the Chattahoochee Arsenal in Florida and see little action for the rest of year besides fighting alligators, mosquitoes and sickness. It is Florida that the veterans like Jesse and Andrews were reaching the end of their three year enlistment. It was not to be since the Confederate Congress passed a law conscripting all existing units and soldiers. They were now into it until the end.

The 1st will see action in South Carolina including a brief garrison duty at Fort Sumter before returning to Georgia and take up the defense against General Sherman who is investing Savannah in December, 1864. As they escape from Savannah, the 1st finds itself in the South Carolina swamps attempting to slow down the irresistible Northern Army being out numbered at least 10 to 1. It is all but over. The 1st retreats and skirmishes with the Yankees into North Carolina. By April there is little food but plenty of officers. The troops find out about Lee’s surrender and on the 26th of April, General Johnston does the same for his Army of the Tennessee near Greensboro, North Carolina and Jesse is mustered out of service. By late May they were home. Jesse was 19 years old.

Jesse returns home to nearby Union County and weds Elizabeth J. Self on September 3, 1865. He had been mustered out of the Confederate Army less than six months before. We crossed much of the mountainous Union County on the Appalachian Trail in 2011. While the region is quite beautiful, farming must have been tough. There were no children from this marriage and Elizabeth will pass away without leaving burial records. In the 1880 Census he describes himself as a widower. Jesse will re-marry when he is 35 in 1881. In the Census, he states that he is living with his Brother-In-Law, James Hughs.

During the 2011 trip we had the occasion to visit the Old Stone Church near Ringgold. Our stop there was serendipitous. The elderly couple manning this local museum (also on the National Register of Historic Places) were more than helpful. By the end of our three hour visit we knew that Jesse and Celia were married here in 1881. This Presbyterian Church had been constructed in 1850 and had been used as a hospital during the civil war. Sherman and Johnston’s forces were engaged at nearby Ringgold Gap. We also saw the records that Jesse was responsible for the road that ran by his farm, After receiving driving instructions we visited the farm site. The land is still being farmed. 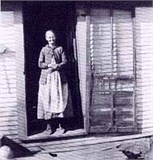 Celia Cross is born in near Catoosa in 1866. This would make her 15 or 16 years old when she marries Jesse. It appears to be a teenage marriage that worked since they will have ten known children over the next two decades including Peggy’s Grandfather James Monroe Bryson in 1886. By 1900 the family with seven living children will be in Hunt County Texas. Hunt County is in the northeast corner of Texas. In 1900 the county economy was based on cotton. Jesse tells the census taker that he rents 219 acres of farm land and cannot read or write. Evidently, Celia handles that end of the family business since she reports that she is literate. Since there are no land tax records in Jesse’s name, we can assume that he was a sharecropper and probably poor. By 1910 they have moved to Hulen in Comanche County, Oklahoma. This former Indian land was opened to white settlement in 1901 and Jesse was renting 184 acres of land presumably to grow cotton. James Monroe is no longer living at home. By 1920 the family is now farming near Wayne, McClain County Oklahoma. Jesse, now 73 describes himself as head of household on this 54 acre farm that his son, John Elliot farms for him. Wayne lies a bit north of Ardmore.

By 1930 the family with Jesse, now 83 is located in western Oklahoma in Harmon County. Their rent is $15 a month for the 11 members of the household and they describe themselves as raising cattle. Jesse will die in 1938 at age 90 and Celia will follow him two years later in 1940. They are buried next to each other in Cotton, Oklahoma. Cotton County lies in the Southwest corner of the state near the Texas border and lies in the region known to history as the Dust Bowl. While Jesse was a man of modest means, his family had to be tough and resilient.

The Great Depression impacted families throughout the Dust Bowl region with relentless suffering and deprivation. The impact on the children like Jesse’s grandson Junior who lived with his grandparents off and on had to be intense in the formation of their personality.

One thought on “Jesse Monroe Bryson the Confederate”