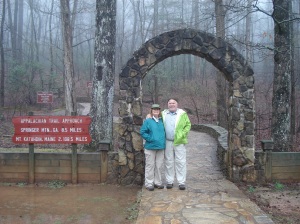 Start of the Appalachian Trail

In the spring of 2011 we decided to walk a portion of the Appalachian Trail. We knew it would be difficult but had no idea how tough it would actually be. We should have taken as hints the baseball sized hail that fell the night before we started. Or we could have heeded the warnings of the Army Ranger Survival School trainer that we encountered in Dahlonega, Georgia who told us about the truckload of rescued hikers the previous day. We headed out anyway. on our first day we encountered a young man suffering from extreme hypothermia in a shelter. We did what we could and sent out messages for help with hikers heading back to civilization.  The hike was difficult primarily because of the weather consisting of rain, snow, hail, tornadoes, and no sun. We managed some two hundred miles in the process but decided that we weren’t having fun and called it quits in the Great Smoky Mountains.

The upside was that we traversed much of the same country that the Brysons had explored and settled in the early 1800s. Traipsing through the northeast counties of Georgia and reaching the area around Bryson City the hard way was in itself an education. While the family ancestors may not have used the “pointless ups and downs” of the Appalachian trail, they certainly encountered the same weather and isolation. It was humbling to remember that many of the elders were walking through these same woods in their eighties in homemade shoes and clothing carrying knives and rifles for protection against all manner of dangers. 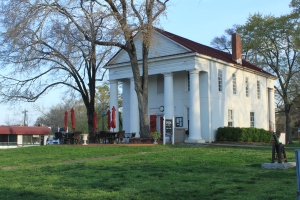 Tracking the movements of the Brysons can be daunting. For instance James Naill Bryson is born in the gentile Piedmont region of Pendleton in 1790 to Andrew, the son of the original George. Evidently as this area was either too settled or expensive, James moved on with his family at age 6 back to Iredell, North Carolina where his grandparents had their farm. The geography can be very confusing as the entire region uses Georgia as a solid foundation with a wedge called South Carolina to keep North Carolina, Tennessee and Kentucky from sliding south and crushing Florida. The important thing to remember is that the Bryson stayed in the hills. We will rarely find them on flat land for very long.

James marries Ann Gross in Haywood, Buncombe County, North Carolina at age 19 in 1813. We next find him in Union County, Georgia in 1850 according to the Census. The Appalachian Trail passes through Union County at Blood Mountain and Neels Gap both of which we remember well. The reasons for James relocation could be the discovery of gold near Dahlonega, Georgia in the 1820’s (the locals take pride in their “America’s First Gold Rush”) or Geogia Land Lottery 1832 which reallocated former Cherokees land to white settlers. 1850 finds him in Polk County, Tennessee which lies in the extreme southeastern corner of the state near the Hiawassee River. James dies in Caney Fork, North Carolina very near Sylva. The picture of the restless Brysons is thus illustrated by the story of James.

Along the way, James and Agnes manage to raise eight children amongst them is Andrew Madison Bryson who  is born in 1815 in Pendleton, SC.

Andrew’s movements parallel those of this father. After living in Buncombe County, North Carolina and marrying Lydia Berrong in 1834 he moves, possible with his father’s family into Union County, Georgia. It is possible that his move to Union County could have been to nearer her Berrong family which settles near Hiawassee in Towns County, north of Union County. As an aside, Georgia has the most counties of any state beside Texas and their were constant shifts, merges and spawning of these counties.

Lydia with her Great Grandchildren taken probably near Whitfield, Georgia. Lydia is of the daughter of one Henry Napoleon Berrong who was born in France in 1785 and will leave an extensive family that still populates much of Hiawassee on the Georgia-Tennessee border. Henry lives to 100 and we found plenty of evidence while traveling through the area that he was prolific. His origins are almost mythic. Family history has Henry and his brother being kidnapped from their father’s Bordeaux vineyards and transported to South Carolina where they escape from the ship. Henry is brought ashore on the back of a black man and hidden from the kidnappers under the stairs of people who will raise him. I am not sure about the documentation but it makes a great story. The Napoleon name must have been given after his arrival since Napoleon was an unknown Corsican until the mid-1880s. Fun to guess.

Meanwhile, Lydia and Andrew manage to give birth to twelve known children starting with an apply named Francis Marion Bryson in 1836 and most importantly for us Jesse Monroe Bryson in 1846 while living in Union County. They movement to Tunnel Hill in Whitfield County will lead to their being in the middle of Sherman’s campaign in Northern Georgia. The main railroad connecting Atlanta with Chattanooga runs through the Tunnel Hill near Ringgold, the end of the Great Train Chase in the Civil War. The story of Jesse deserves its own chapter. 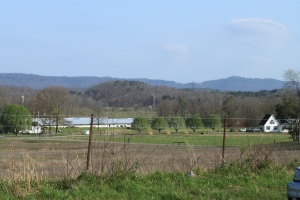 One thought on “Brysons in Georgia”