Home, Home on the Meseta

Survived the wedding party in our hotel. It was still going strong about 2AM. Didn’t make much difference to me since we both found sleep easy to come by. Got a Pelegrino breakfast at a bar, paid the bill, retrieved our bags and headed out of Burgos. Passed by the Arco de San Martin where El Cid’s Casa used to be as well as the twin obelisks dedicated to the Cid. Walked out of city through some remaining medieval walls and enjoyed a pleasant walk through El Parrel Parque. We were quite pleased that there were two designated bike lanes next to the modest Camino pathway since half of Burgos goes bike riding on Sunday. In addition to Futbal (soccer) bicycles are the other great Spanish athletic passion. Crossed the rio Arlanzan over the “Bridge of Maladies” although we are not feeling any special ailments right now.

Finally we were out of the city on a gravel road. First site was a formidable looking prison with an out of place decorative cupola. Reached the confluence of rail lines, highways and freeways which we navigated over and under. All this time the land is remarkably flat. Finally reached a stopping point in Tardajos where many recognized Pelegrinos were taking their morning break. Had a Limon bebida and got sandwiches to go. Climbed a little and passed through Rabe de las Calzadas with its church ringing Sunday bells and past a little hermitage. The weather was cool and cloudy but with no rain. Good for hiking.

Started a gradual climb to a point known as Alto Meseta. The Meseta is a term used to describe the high plains in Spain. No rain today and the sun made an appearance by mid-day. The plains are planted mostly in wheat as it is either too hot or cold for other crops. There was enough terrain change to keep it from feeling like Kansas but any relief like a few trees were quickly noticed. Pilgrims use places like this to stack rocks out of devotion or boredom. The rock piles are called piedras santos or sacred stones. Kind of like Indiana Jones stuff without any danger. We reached a pump fountain in a grove of trees and with a wind sheltering brick wall. Had our still warm ham and cheese sandwiches and kept out of the wind.

Finished out climb and finally reached a crest where we could see the town of Hornillos del Camino in the distance. Took a few photos of the Camino stretched out beaded with Pelegrinos. Since the rooms in Hornillos were full, we had made arrangements to be picked up in Hornillos and delivered to hotel in a village a few miles away. Worked like a charm. We have a nice room with meals in a cute little village off the Camino. The hotel is the local gathering point on a Sunday afternoon. Kind of like the Charlie with a cast of local characters including the old guy with a cigar who doesn’t acknowledge the EU’s position on second hand smoke. I am sure my dad and he would get along fine.

The Meseta will be our fate for the next couple hundred kilometers. Some pilgrims board a bus to miss this section. We figure it is part of the deal. We will see how we feel in a couple of weeks. We just hope that we don’t go from the 50s to the 90s too quickly. Two weeks of the 70s would get us across most of the Meseta. We will try to stay focused on the people and what people have done over the millennia to make this region a good place to raise families and live life. 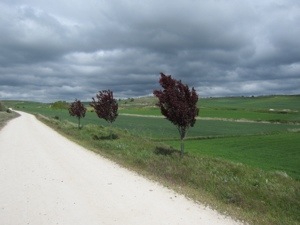 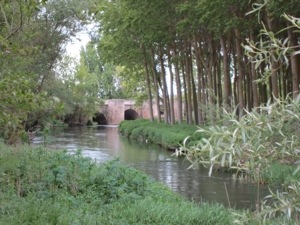 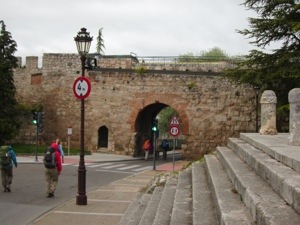 2 thoughts on “Home, Home on the Meseta”