El Cid is Alive and Well

Last time I saw El Cid was with Charlton Heston strapped to a horse and very dead. He rode his charger out of Valencia and the Moors melted away. The movie, as I remember it, implied that El Cid disappeared. I can assure you now that he is alive and well in Burgos.

We left a little early with a long walk of 26 km ahead of us. The village annual St. Juan party did not start last night. We missed it. We reached the village of Ages and had a breakfast. Many of our fellow pilgrims could not deal with the cold showers, no heat, dirty single toilet for 70 pilgrims in the Aubergue in St. Juan de Ortega and spent the night in Ages. Continued on and climbed a hill outside Atapuerca where some interesting archeology is taking place. Crossed a still standing bridge that St. Juan had built back in the 11th Century.

The ground became pretty flat as we entered the suburbs of Burgos, a city of 180,000. Stopped for Limon and pastry with other comrades. The Irish are finishing their trek in a couple of days. They have removed their packs and use the transfer service. They are paying 7 euros for each stage unless you buy a week then it is 6 euros a stage. Walked into Burgos by following the fence around the airport. Never realized how big an airport is until you walk around one. Hit the streets of Burgos for five or six Kms. Can’t say I enjoyed walking the city streets.

New pilgrim contact from Sacramento State, a Professor of Ethnic Studies. Enjoyable conversation as we trudged through crosswalks and around cars parked on the sidewalks. He has many similar interests. We will remain in contact. Kept following signs to city center and then to the cathedral where our hotel was located. Unlike most ad copy, they were not kidding when they said next to the cathedral. The Hotel Meson del Cid is right on the cathedral square. We got to watch a very large wedding and it looks like they have booked most of our hotel. They have been celebrating all afternoon and seem to be must getting started. Haven’t been invited to the party. It may come to us.

After a fortifying beer and pizza, we ventured into Christianity’s answer to the Alhambra. The Burgos Cathedral, to paraphrase Huell Howser, is amazing! We have been to many famous cathedrals and basilicas in Europe. For interesting stuff, this place tops them all. Many of the chapels, some 15 of them, could fill a museum by themselves. The art covers centuries in a building that reflects the centuries also. I will attach a bunch of pictures to give you an idea of the grand nature of this place.

Dead center in the transcript lie El Cid and his wife. His statue is all over town along with his fellow knights who fought against the Moors when they were not feuding with each other. Fortunately, the Spanish have avoided most of tackiness that Salzburg mastered exploiting Mozart and the Von Trapps. Did enjoy the chest stuck up on a wall. That was the chest loaded with sand that the Cid passed off a collateral for the bishop to fund his fighting. He told them it was gold and made them promise to not open the chest for a year. It seems that he never did pay back the loan. I guess you can be a deadbeat and still be a hero.

We are dead tired after a long day so I am calling it quits unlike the wedding party which at 10 is getting revved up. 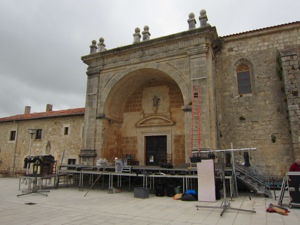 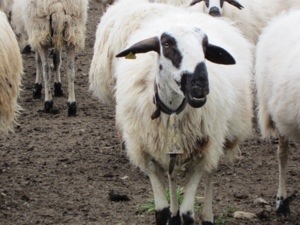 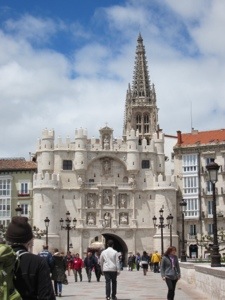 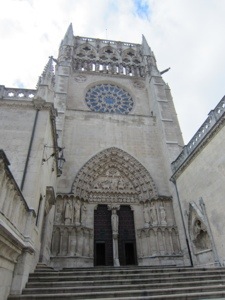 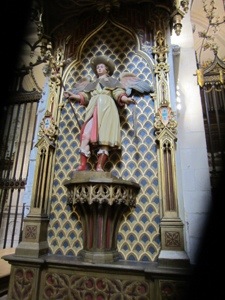 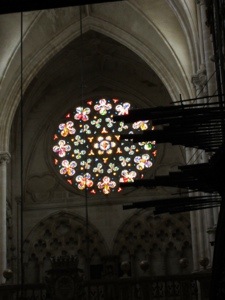 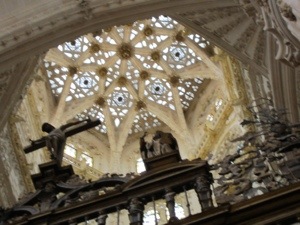 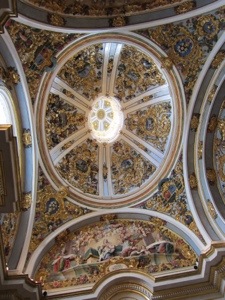 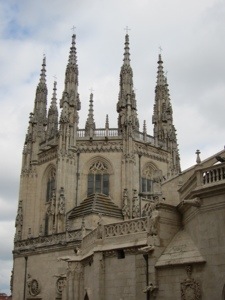 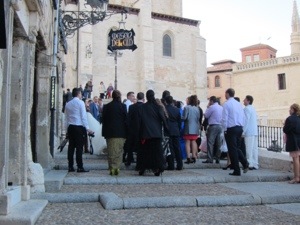 5 thoughts on “El Cid is Alive and Well”