First Impressions of the Spanish Camino

All through France people had told us that the Spanish Camino was much different than the French part. They were right.

The Number of people on the Camino is huge compared to France. Where we might see on a busy day in France 20 or 30 people, there were hundreds that I saw today. Not sure how I feel about the numbers. It is not crowded since there are miles to spread out. It is just astounding compared to walking virtually alone for days in France. Lots of English speaking on the trail. Many Americans. Because the groups tend to be large, they are pretty self contained. We will let this be for a few days. We may chose to be more social later.

The Spanish have done things to the trail that we never experienced in France. We walked on several Kms of stamped concrete! Really freaky walking on a fancy concrete pathway instead of mud slogging all the way. They also had sections of concrete or paving stones in likely bog areas. No mud romance in that. We did run into mud but for the most part there was a hard surface so bogs were mostly avoided.

There are ups and downs. Especially since we are in the Pyrenees foothills, we did some climbing. The descents were the worst near the town of Zubiri where there was a steep down hill on slate. I know we under estimated the hills since our early hiking in Spain yesterday was so easy. We will try to be better mentally prepared tomorrow.

Never saw a mountain bike in France. Too many in Spain. They know they are not really welcome by hikers so when they pass you, they always let out a loud Buen Camino. That is good but it doesn’t make up for them careening down a hill behind you and yelling for you to make way. Hikers and their batons and parkas do not always maneuver as quickly as bike folks like. I wish they would just stay on the road like the other bike pilgrims.

Many medieval bridges to cross. We took care of our rabies vaccinations by crossing the bridge in Zubiri enough times. But today, since it rained or drizzled all day, we were mostly focused on the ground ahead. Peggy managed to unwrap the camera for a few pictures.

We have settled into another strange accommodation in a ladies store-restaurant-Chambre operation. She is cooking us dinner and promised me wine. Hot showers and a heater that works unlike last night where the heater was “automatic”. That meant that it came on when the pipes started to freeze. We survived. Hard to believe that it is this cold at the end of May. I know that it could soon turn real hot but a week or two in the 70s would be great.

Bottom line is that Spain ain’t France. But I do believe that almost anyone could do this
part of the Camino whereas France was killer the first week or so. I see plenty of people making adjustments and dealing with blisters like we did for a couple of weeks. Things will sort themselves out. 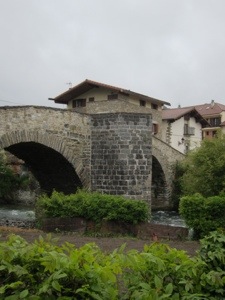 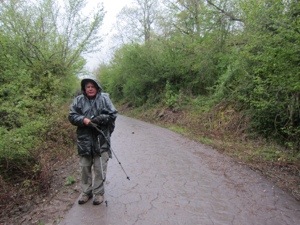 4 thoughts on “First Impressions of the Spanish Camino”