Left our castle this morning a little after eight. We knew we were facing a big climb and we were mentally prepared for it. The sky was mostly blue and it looked like all would be dry crossing the pass. The low road that we were traveling on used a not too busy road much of time. It is always disconcerting when you walk along a winding road inside the guardrail as there is a shear cliff on the other side. For the most part the drivers are very aware of your presence and give you a wide berth. Thankfully very few trucks.

We left the road three times to take gravel or dirt paths. Some mud but considering all the rain, it was not too bad. Talked briefly to the struggling woman from yesterday. She was glad to start early and have the full day. She is determined and I think she will be all right. Did not see the college kids. In fact, we only saw bicycle people pedaling up the grade.

I am not sure if they reopened the high road or not. There is plenty of snow up there. We heard that they had to rescue hikers the day before yesterday and that is why they closed it yesterday. Evidently, people were diverted to the low road ( or could go back to St. Jean). I am not sure how much climbing they had done was thrown away by dropping down to the low road. My guess is at least a 1000 ft. My dirty pilgrim’s hat goes off to them.

The low road climbs 3000 ft and the high road climbs 4200 ft. Both are about the same length to the meeting point at the pass where Roland died fending off the Saracens. In actuality it was Basques who were ticked after Charlemagne tore down the walls of Pamplona. In the movie, “The Way” , Martin Sheen completes the high road in one day. While it is possible and is done by many, I think the movie has created a potentially dangerous myth.

Peggy and I after hiking for a month found the climb exhausting and we took two days. The total hiking time for the two days was less than eight hours but we don’t think we could have done it in one day. It would have been foolish and futile given the conditions of the last two days which are similar to those depicted in the movie. Anyway, we loved the movie and give another tip of the dirty pilgrim hat to the Sheen family, but I hope people don’t think that if Martin can do it I can.

Back to our climb. It was pretty steady and beautiful until we reached the killer last 3 Kms. The trail followed electrical high tension lines up their access road. It was steep. We stopped a bunch and Peggy said I had better not say it was easy. It wasn’t but obviously we did it and reached the top before noon.

It was very cold and the clouds were gathering as we reached the top. Had to put on jackets and mittens. So much for the fearful Spanish heat. At least for the next couple days it appears.

We were joined at the top by numerous bicycle folks in their Lycra. Also saw RVs and cars and motorcycles. It was too crowded for us. The pass is called Puerto de Ibaneta. It is where Roland did his last stand. There is a monument near the rock on which he broke his sword, Duredrel to keep it from the Saracens and sounded his horn, Oliphant for the last time. We took the required pictures and headed down into Roncevalles. We crossed through the huge Alburgue that was in the movie and visited the church. Treated ourselves to a restaurant lunch and watched the tour buses pull in and out.

Needed to put on our parkas as light rain started. It could have snowed, it was so cold. Went along a park like trail for three more Kms to Burguete to look for a room. Passed through this nice little forest and saw the redone White Cross at the edge of the forest. Only then did we see the sign that explained that we had just passed through the Witches Forest. In the 16th Century a coven of alleged witches practiced their black arts in the forest. Nine were burned at the stake in the town we were headed for. Luckily no bad vibes were discernible. We arrived before two, everything was locked up. We ended up in the first place with an open door.

Tomorrow we will start to adjust to Spanish conditions. We need to adjust our schedule so that if we arrive in our destination town before two, we want to make sure there is an open restaurant. Also need to get ready to wait until eight to eat unless the town is big enough to have a bar that serves tapas. We will figure this all out over the next couple days. By then we will be passing through Pamploma.

We may try to eat at Ernest Hemingway’s favorite restaurant and bar in this town, if we can wait until it opens. 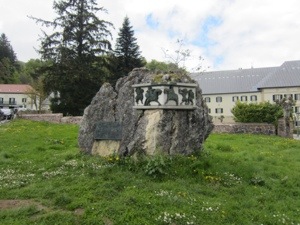 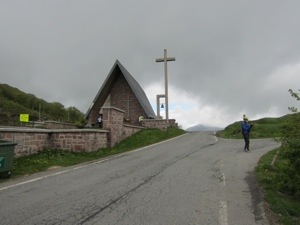 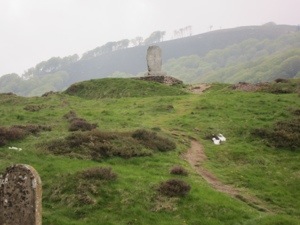 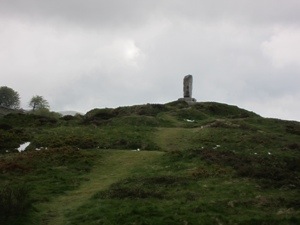 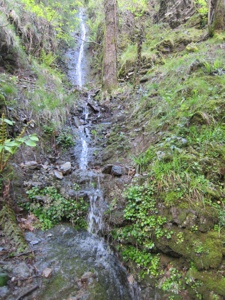 4 thoughts on “Over the Top”