Béarnaise Sauce is one of the five “mother” sauces of French Haute Cuisine. We are now the old Kingdom of Bearn in southwestern France. Evidently the sauce originated in the 1830’s by a chef at the Henry IV Restaurant in Paris. Henry IV or Henry of Navarre or Henry the Bold was one of the most popular kings in French history. He was the King of Navarre which is this region and is traditionally known as Bearn.

I bet you thought that Navarre is in Spain. It is. Navarre spans both countries through the Pyrenees. It used to be called the Kingdom of Pamplona. Pamplona has had it pretty rough. It was made part of Charlemagne’s Empire and he destroyed the rebellious city’s walls which made it vulnerable to the Muslim rulers in Cordoba. They survived and Pamplona became a significant player in northern Spain until brought under the control of Ferdinand of Aragon who had hooked up with Isabella of Castile. Somewhere in that time frame, the Pamplonans learned to run with bulls. We are not there yet but we are in the Pays du Basque.

Henry of Navarre was the leader of the Huguenots during the French Wars of Religion. He avoided assassination after his wedding in Paris during the St. Bartholomew’s Day Massacre. He partnered up with Elizabeth I of England to eventually be crowned the French king after his rival Henry’s managed to die off. He converted to Catholicism to be more acceptable to the mostly Catholic French but extended toleration to the French Protestants. He was also Gascon by birth and brought with many fellow hearty Gascons to Paris. His Gascon accent bothered the Parisians but they got to like the guy anyway and named a favorite sauce in honor of his birthplace.

So much for the sauce. What about logistics?

When you move at 2 1/2 miles per hour, you become very aware of logistics. Food logistics are always a priority. When you leave a Gite with a Petit Dejeuner under your belt, you have four hours before those carbs leave you hungry. You have either bought a picnic lunch the day before and are carrying it or you need to hit a town with a restaurant or market that is open. Remember, the markets usually close from 12 to 2 and are frequently closed on Sunday and Monday or holidays. Restaurants are great but can only be found in large towns unless you get lucky. We do have guide books that give us clues but there is nothing absolute in France. So far we have managed but we have made do with chocolate and dried fruit a couple of times. We managed to do it right today and enjoyed an early picnic to the amusement of the French who wait until 12.

After food comes water. Not much of an issue so long as you start with 4 quarts of water in the morning. We have only run dry once. Most towns have water somewhere. You may have to use the hose bib in the cemetery but this has not been an issue.

You kind of adjust your hiking to fit a couple of key factors. One is locating accommodations. In southwest France places are much less frequent. We have to be prepared to walk a long way or even a short hike to manage. Today we got to our little Gite with two rooms right at 1 PM. The owner was impressed that we had covered the ground so quickly. We told him that we just tried to keep up with the French. He was amused. Looks like we will eat with his family tonight. The room includes a private shower and toilet (with two buttons). I guess we could have walked further but we are sticking to our 20 km per day plan.

We may have rain tomorrow for our hike. If so it will be through the rolling Basque countryside. The land is full of streams and hills. This is not like the Landes region which matched Kansas so perfectly. Wildflowers are everywhere except in the farmer’s fields. It is green and we are 638 Kms on the trail and a little more than 100 Kms to the Pyrenees.

Said good bye to the ladies from St. Emilion since are done until the fall. They were our guides through big towns. Also got a number of pointers from the nice guy from Montreal about traveling in Spain. Burro lady was camped out at the Gite. We asked her how she was going to get Victor, her burro, home from Spain. We did not get a clear answer. Hopefully, the burro doesn’t become burrito stuffing. The old Italian guy is still waiting for a replacement part he needs for his “carriage” that carries his stuff. Saw some young guys with awful blisters. Pretty much the news from France. 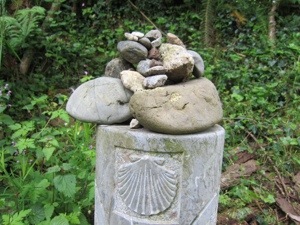 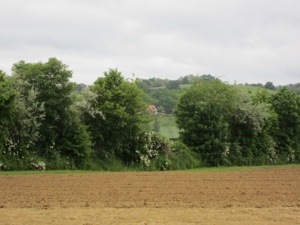 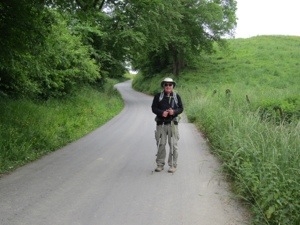 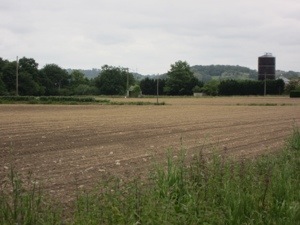 3 thoughts on “Béarnaise Sauce and Logistics”