Sitting in our hotel while the rain comes down. Still managed a town walk in Coimbra despite the pouring rain. Left Salamanca and drove 300 km. Most of it was on highways until they gave out in Portugal. Arrived safely but a bit nerve racked. Settled down and got to business.

First, I want to post a few pictures overlooked yesterday.

The best hotel picture of the trip goes to Peggy who took this from our room in Segovia. 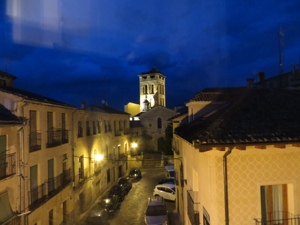 Next, the walls of Avila deserve another look. Unlike Coimbra, where the stone walls were repurposed as building stone, Avila still has the originals. 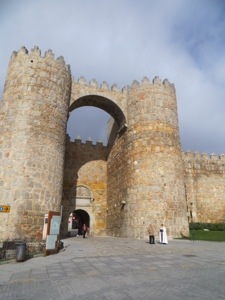 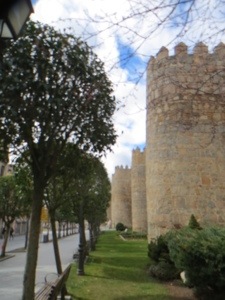 Coimbra was originally Phoenician and then Roman before being take over by the locals. The street plan still contains the maze like character of the medieval city. Being on a hill, there are lots of steep streets. Climbing in the rain and dodging cars is always a challenge on 8 foot wide lanes. Got to the top, more or less, to see the University. Founded in 1290, the university has been more or less updated. There was a big modernization push in the 1500’s. that is the part tourists want to see. Student housing has never been updated. Took us a while to find the old center. A big beer bus (the riders have a traveling beer bar on board, enough said) full of German tourists beat us there.We did our own tour. 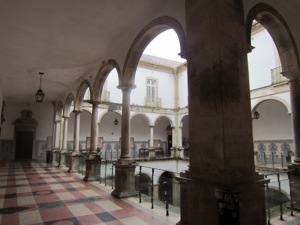 The highlight, for me, of our university visit was the church with its great collection of reliquaries. Since we will soon be on our pilgrimage, it is good to try to understand the phenomenon. Without being too incorrect, let me summarize that it was believed that being near or touching the relics allowed the former owners to act as intercessors for you with the heavenly management. Churches with a good collection of these mostly body parts could do a healthy business with pilgrims. This church had quite a few bones.

Peggy could not stand to look to the degree that I was willing. There were at least 20 of these Busts with parts exposed to the close observer. Normally, the busts and arms were displayed in a major prize showcase near the alter and only taken out for display on the saint’s day. It was great for them to bring the collection down off the wall. Here are a few examples. 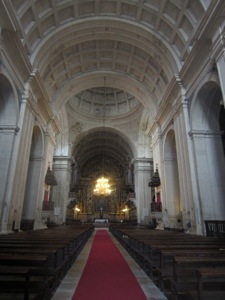 Hopefully, I have not offended anyone with my brief overview. We will have ample opportunity to assuage strained feelings later. Given the miles to travel on foot, I may be more careful at the next relic collection.

It will soon be dinner time. Peggy has her heart set on lampreza or lamprey which is a specialty about a hundred yards from our hotel. Can not wait. 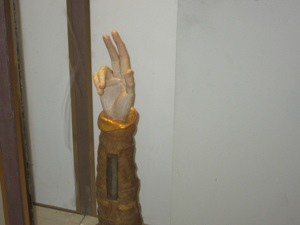 Postscript
Peggy bailed on the lamprey. I had goat. You might say old goat had young goat. It was good could not figure out if the white thingies were bones or cartilage did not ask. Peggy, by the way, had pork. Pretty normal stuff.

5 thoughts on “Rain and Bones”