The Greshams, in addition to the McKenneys, were also refugees from the English Civil War. They will join the McKenneys in the Northern Neck of Virginia to create a new life. Not all of the Greshams leave England because there was still a nice place south of London to manage, Titsey Manor. 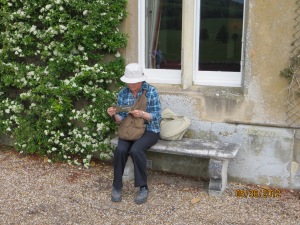 Peggy resting from her exertions around the manor house

We need to go back to the beginnings. Way back.

Remember 1066. That was one date your teacher said to remember. It marked the last and only successful French invasion of England. It so happens that Peggy’s ancestor, Ralph Branche was there also.Ralph was a vassel of William de Warrenne. He held in fief from William lands to the north on the Seine estuary in Normandy. William acted as one of Duke William of Normandy’s generals at the Battle of Hastings. It is not known where in the Norman line that Ralph would have fought with his son Richard acting as a squire. We traveled to Hastings to visit the battle site and found Ralph’s name on the battle role of knights.

Battle Roll 1066, Ralph Braunche is in the far left column about 20 names down

The battlefield of Hastings. This view is from where the Anglo-Saxon battle line stood. The Normans are down below.

Following the Norman victory, William of Warrenne is granted vast tracts of land in 13 English counties. Ralph Braunche is awarded two knights fees including the town of Gresham in Essex. A knight’s fee is enough land and serfs to support a mounted knight.  Gresham like the Pays de Caux in Normandy is on a coastal plain. Ralph would feel right at home especially with those Saxon serfs working to support his lifestyle as a respected knight. By the way, he is Peggy’s 24th great-grandfather.

Gresham Parish Church today. The tower was there when Ralph arrived to take control.

to be continued…….when we return from France and Spain

3 thoughts on “Grasshoppers – The Greshams”