It was all I could do to keep Peggy from breaking out in song. We were in the family homeland. While she is large parts Scot and English, Switzerland speaks to her. We drove a short distance in pouring rain from Lindau in Germany to Igis in the Graubunden region of eastern Switzerland. This is where the Uhlians and Kreisler families immigrated from in the 1840s before marrying the Scotish McKinneys in Tennessee. It was like old home week. 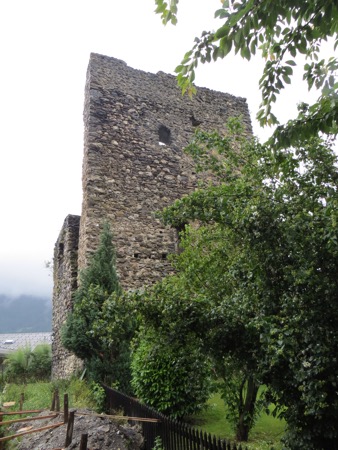 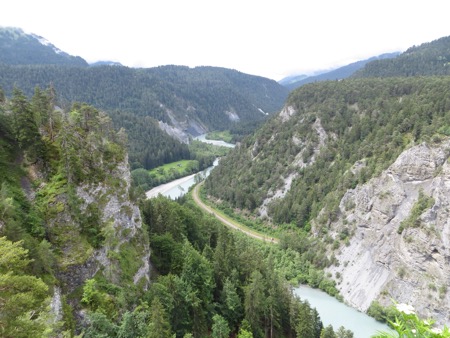 We were welcomed at our B&B before 10am. This is way too early but we had no intention of staying. We just wanted to know where we would be bedding down for two nights and perhaps unload our luggage. Our hostess Doris and her husband Stephan said that they just needed 10 minutes to get ready for us. By the time we got back from the local bank, there was a warm nut torte and coffee ready for us. The first order of business after greetings was to call the local genealogist who might help us with family names. He explained that the Kreis name was common in Vals which is very near here. The Gadmer name is the same as some very prominent Swiss leaders. He had difficulty with the Uhlians name since it was probably derived from the Swiss Name Uhl that is from the region of the upper Rhine.

The Rhine flows right through Igis or Landquart as it is for the most part presently known. Our host Stephan offered to take us the Rhine to a region refered to as the Swiss Grand Canyon. We no idea that such a place existed. We were soon on our way in his very big and fast BMW. We did stop at the remains of a castle occupied briefly by Charlemagne. Igis does lie on the main trading route from Italy to Germany. Arriving at this spectacular canyon, we were somewhat surprised that we would descend a 1000 meters into the canyon in pursuit of our host. We reached the bottom and magical pastures and cabins that must have housed any number of Uhlians generations on the upper reaches of the Rhine.

We followed Stephan back up to the car while stopping every few hundred yards to exchange world views. The rain cooperated and we panted our way back up to the top. Yes, we have rocks.

On our own in the afternoon we explored Heididorf where they filmed some of the original Heidi movies. We have plenty of pictures of Swiss cows, goats and chickens. It was cute and we have souvenirs. We returned to town and ordered a take out pizza. We got two instead of one because we mess up the hand signals. The index finger in German means two and the thumb is one. Our hosts go a kick out of this and shared our extra pizza and the nice Montepulciano that I found in a supermarket.

We discussed almost every topic known to man before Stephan took his boys to a movie. The boys had been involved in “soccer Saturday” as we know it. We have settled into our wonderful quarters that are so Swiss and sparkling that it is hard to believe.

Peggy says that she finally feels at home after being somewhat at discomfort in Germany with the emphasis on things Nazi. It is all pretty and should be sunnier tomorrow.

3 thoughts on “The Swiss Homeland”