I am composing this missive in the same room that evil people met and schemed their plans for world conquest. We are in the meeting room of Hitler’s Eagle’s Nest high above Berchtesgagaden. I find it somewhat unsettling to sit here eating my Shoko-Royal-Torte and coffee in the same room where Hitler and the rest of his evil bunch strutted around and bullied Neville Chamberlain in 1938.

We drove up a road  a few kilometers to bus stop where we bought tickets to ride a bus. I was trusting German engineering as we wound up the hair pin turns with the severe drops on the side. We reached the Hades like entrance tunnel and the famous brass elevator that was built to lift the Nazi bigwigs almost 900 hundred feet to the “Tea House”. We wandered around this cold stone, mausoleum feeling place for a while. While setting is dramatic, the architecture is down right depressing. It is almost an inverted hell. The chamber next to the bottom of the elevator reminded me of the beehive tombs in Greece. There is a small exhibit of pictures about the construction of the place and the road. One of the official guides was explaining in English that many of the workers were prisoners who volunteered to help build the road. I am not sure this was like the CalFire crews. 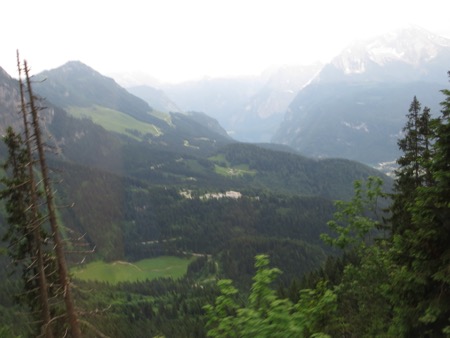 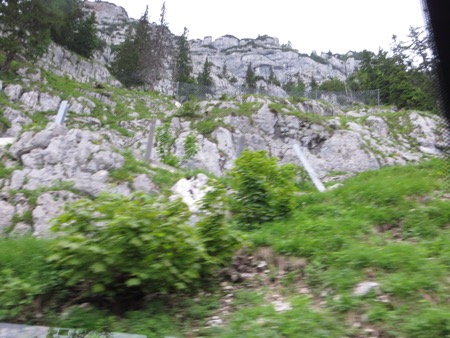 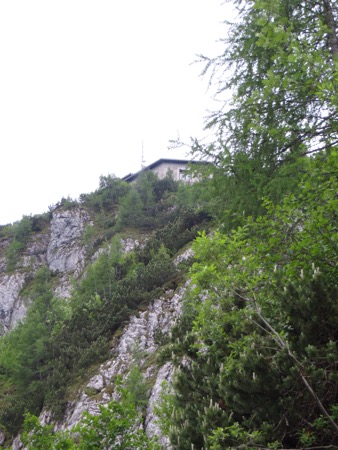 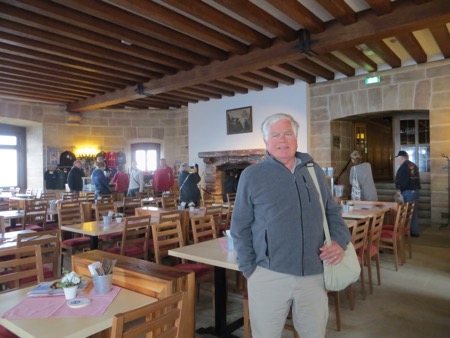 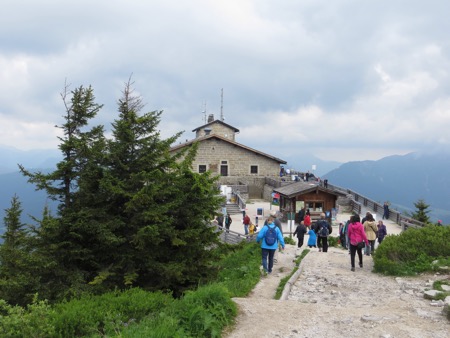 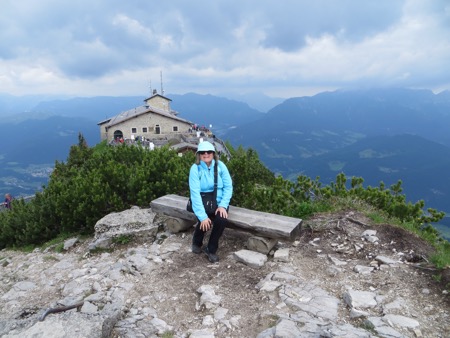 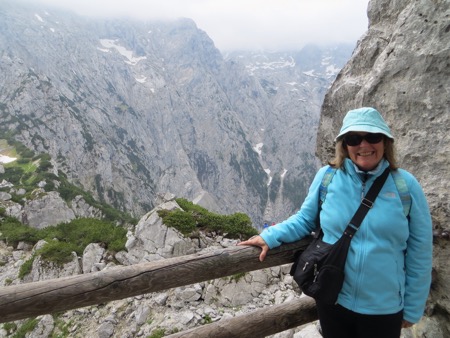 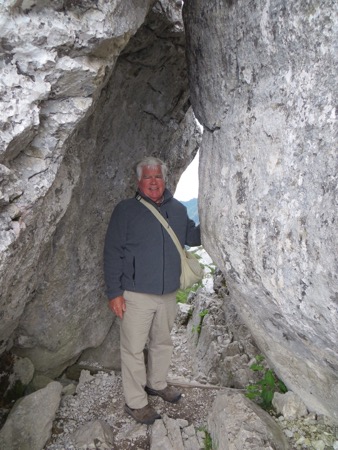 There is only one picture of its most famous occupant. It is small and shows a cowering Hitler scutched up against a wall like me on the Tower of Pisa. His fear of heights is hopefully the only thing we have in common. Anyway, he rarely visited the joint because of his fear of heights and a justified fear of the Royal Air Force. The place is a bit exposed. 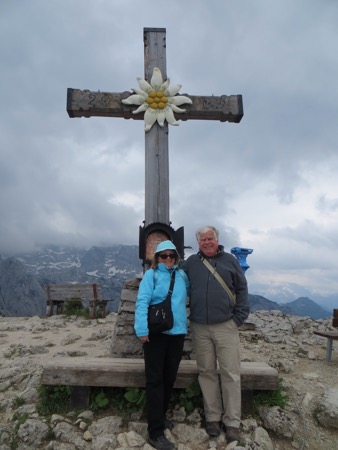 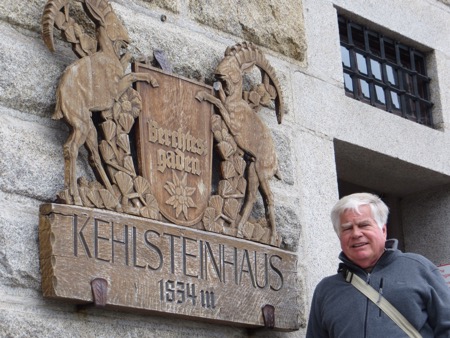 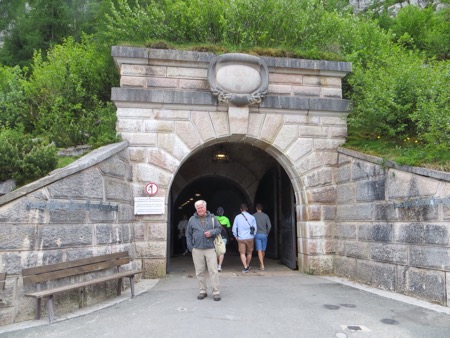 The Eagle’s Nest or as I prefer, Viper’s Nest, was constructed in a hurry between 1937-38 as a birthday present to Hitler from his henchman Goering. The cost was covered by donations from German industrialists and forced labor. Gratefully, there is no exhibition of the small private quarters. This makes sense since Hitler could not acknowledge too publicly his relationship with Eva Braun. She actually spent a lot more time here than he did. The last thing the German’s need is a collection of all things Adolf like they have for Frederick the Great. In fact, I don’t mind looking at Frederick’s living quarters but Hitler’s would be troubling.

Some historical figures did like spending time here and that was the U.S. Army. The 101st Airborne was tasked with taking this place. It was feared that SS fanatics would make a last stand here. The series “Band of Brothers” relates the story of what took place here. Luckily the war was over. Y the time our guys reached the place and the rumored last stand of the SS was a myth. They were all headed to Argentina or making themselves valuable to the Allies.

We do not know if Peggy’s paratrooper, Grandfather Papa Joe was with a unit  that made it here. We know he was dropped into Normandy and fought in Operation Market Garden and the Battle of the Bulge with the 101st.  I would like to think that he finished his combat duties near here if not up here. It seems that every GI wanted to reach the Eagle’s Nest. Goering’s famous wine collection and his house were demolished, not the wine, in the post-war era. The Allied occupation forces did not need future Nazi shrines. Most everything was demoed. It appears that most visitors including us are here out of curiosity. This is no Graceland. 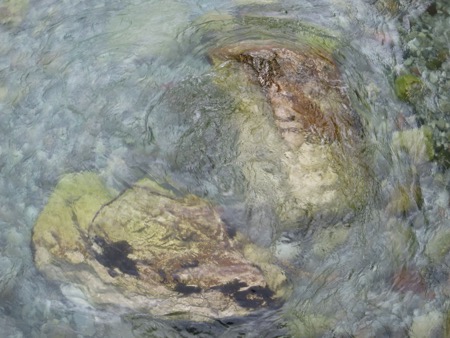 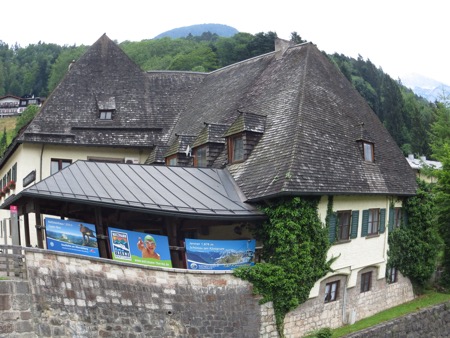 Most of our time up here is occupied with walking on the scary rock paths and posing. The weather is not great but we can see a long ways. We followed some of the paths among the rocks above the Nest. There were no signs warning about high heels. We had to laugh with the 4 hour trail sign. We know that means 12-16 hours for a conditioned athlete. Despite the deserved ominous reputation of the place, the setting is dramatic if not inspiring. We did pose in front of a cross erected in the 1990s. Hitler would have had nothing to do with such symbolism.

Just returned from the evening repast. We tried to go light after yesterday’s gorging on ribs. It was to no avail. Even the vegetarian spatzle was more than I could deal with. The dining room was lively and noisy but we are still heading for bed before the sun goes down – again.

2 thoughts on “ The Eagle’s Nest, Berchtesgaden ”