Wartburg, Hexes, Donner and Blitzen with a Little Bauhaus

Wartburg, Donner and Blitzen with a Little Bauhaus

Continuing with our quest for all things Luther we drove south through the Harz of Germany, the Harz Mountains. Our first interesting thing was to realize that this is the Grimm Brothers story repository. And most of their stories don’t turn out well. We started OK with a cute steam train that used to serve the silver mines. Did not see any dwarfs or little people. What we did see was plenty of Hexen signs warning about witches. We did not stop at the Hexan guest house nor did we see any gingerbread houses. We did see a detour or too that surprised the GPS but we found Eisenach without too much difficulty.
I was anticipating the worst as cautioned by the guide books. The sign at the bottom of the Wartburg castle road said zero parking spaces. I ignored the sign and was rewarded with the last spot. Oops, I should explain the Wartburg. It is the hiding place for Luther after he was declared an outlaw by the Holy Roman Emperor Charles V. Luther had thumbed his nose at the Pope at the Diet of Worms. Worms is a place and a Diet is a meeting, sorry. His protector Frederick the Elector of Saxony could not let anyone know that he was hiding Luther. They came up with a cover story that he had been kidnapped ( by pirates?). He hid in the Wartburg for 10 months translating the New Testament from Ancient Greek into German. This was a better use of his time than watching Jeopardy. 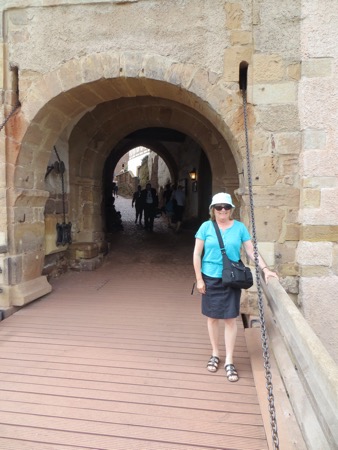 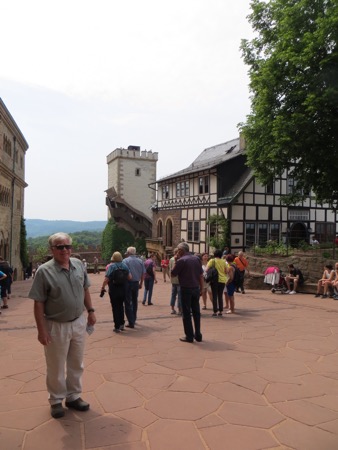 The other almost equally important thing about Wartburg is that Peggy’s ancestors, the Swiss Uhlians, left the old country when tempted with cheap land at a Swiss Colony in Wartburg, Tennessee. They were Swiss Protestants and I guess Wartburg meant refuge in those troubled times of the 1840s. It was a good marketing ploy as almost all of Igis, Switzerland decamped and headed west. 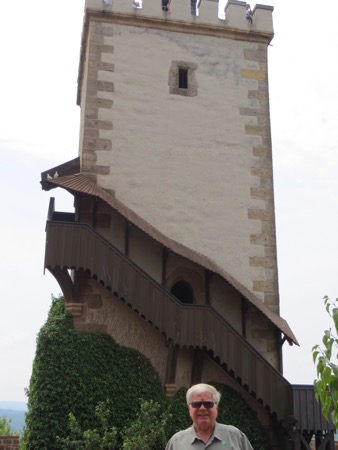 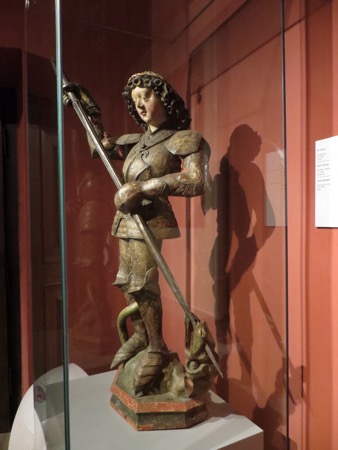 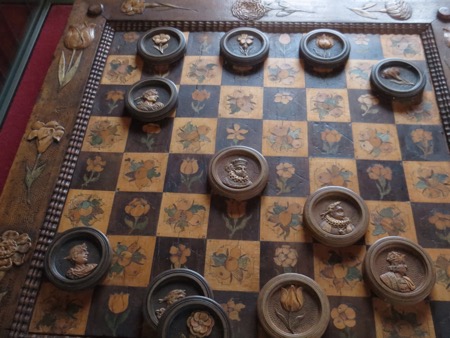 From our miraculous parking spot we took the shuttle to the castle that loomed overhead. We arrived with the drawbridge down and the WCs open. These are good signs. I immediately saw the scary tower with rickety, scarier steps that Peggy started drooling over. I had a short reprieve as we went to see the Luther memorabilia that was collected from all over Germany when Wartburg was renovated under the partial direction of Goethe in the mid-19th Century. While the castle and Luther’s hideout had been a pilgrimage sight for several hundred years, almost all of the goodies had been removed or stolen by pilgrims. They scoured Germany to find enough stuff to make the place respectable. I thought the armoire owned by Durer was the best. 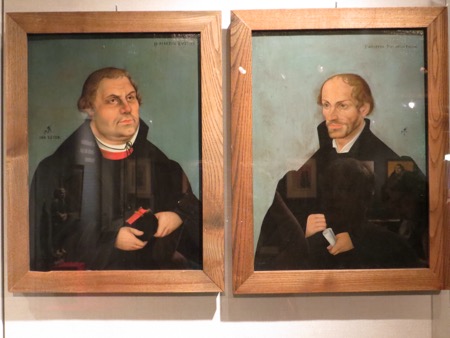 The piece de resistance was his study. You reached it by using a elevated hallway with really cool construction that is suitable for Barrett treehouse access. The study has the devil hanging from a hook. Luther’s desk is almost under Satan. It is told that whenever he was having difficulty in his studies that we would throw ink at the devil. The spots are long gone with the plaster almost all removed by pilgrims. The only documented true relic of Luther’s time is the whale vertebrae. I have no idea of why either. 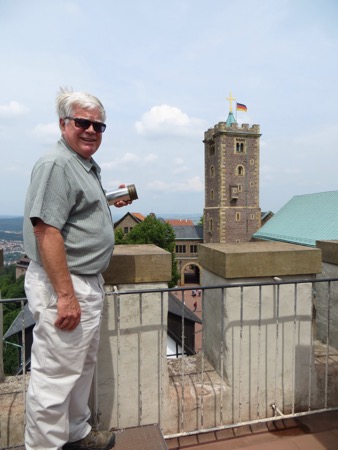 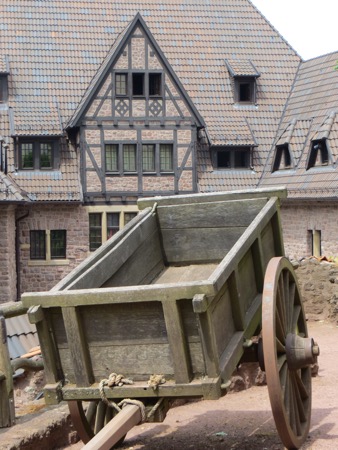 We made it up and down the tower. There was a big sign that warned about inclement weather and lightning. No, it did not hit us. The torrential thunder, lighting and hail waited for us to reach the freeway. I am certain that I will read in the newspaper tomorrow that 10 tourists got turned into Bratwurst on that tower. Anyway, we left Eisennach and the Wartburg and headed for Weimar.

Weimar represents some of the best of the Germans. Goethe and Schiller both called the place home as did the ill-fated democratic Weimar Republic that was snuffed out by the Nazis. The Nazis had a thing about Weimar, especially the avant garde types like the Bauhaus practitioners. We ventured out into the rain for a brief visit to the Bauhaus Museum so that my Daughter Jennifer and her husband Brian would talk to us in the future.

We are staying in a nice modern hotel with the world’s worst Internet connectivity. I will try to post this text. When we get a better connection, I’ll post pictures.

We ate dinner next to the hotel outside In a Biergarten. I think I have seen one sausage too many. Anyway, we joined four Dutch people of our vintage and had a great discussion on all kinds of topics. We returned to the hotel and the only English language station is the Russian propaganda station. We are deep in the old East  Germany. Closer to the west we got CNN and the BBC. The Russians don’t like Hillary.

4 thoughts on “Wartburg, Hexes, Donner and Blitzen with a Little Bauhaus”