As all travelers know, the air leg of the trip is always the worst. Knowing this, I try to prepare myself for the agony and hope for the ecstasy at the end. This journey has started according to this formula.

The ride from Columbia to San Francisco was flawless despite the SigAlerts blaring so ominously on the radio. We reached our hotel parking spot and got the shuttle. Easy enough. We had our online check-in paper and things went fine. Security was not too bad despite the new wrinkle of removing all paper for examination. I guess the pen is getting dangerous at this point. We complied without complaint and waited an hour to board.

The first air leg was to Frankfurt and it was a scheduled 10 1/2 hour flight. Anything over five deserves mental preparation. I thought I was ready until the Beast sat down in front of me. This three hundred pound, hairy hulk was, to his credit accompanying three girls without a wife in sight. He did fine with kids, it was the fundamental problem that he had with personal space. The Airbus we were on held 400 plus passengers on two levels. Naturally we are crammed in Economy which is OK. What is not Ok is when the person in front sits on his knees facing you and stares at you for an hour or stands and blocks the aisle with his rear end in your face for hours on end. I had to remove his fingers from my 6 by 8 inch TV screen more than once. In addition there was another guy across the aisle from me that competed with the Beast for aisle space in order to exercise.

Despite these irritations, I maintained my positive Christian attitude and refrained from chastising the two men who had no idea about airplane etiquette. The flight crew was Germanic and efficient. We received our hydration rations on a regular basis and they did their best to maintain some order near the well used bathrooms. It was not their fault that they had to serve German Volkswagen cuisine. Lufthansa meals will never be confused with Alitalia. Nothing like Dinty Moore stew and tasteless cheese. At least the red wine was drinkable. I am getting pretty good at tray management with the half dozen or so packages and wrappers that come with each meal.

So the first long leg was the expected endurance test. We survived and Peggy and I got a little sleep although I will have nightmares about that rear end in my face. The Pompeii movie sucked and the Noah movie was even worse as our Pastor told us it would be. I did not know that Noah had help with some rock covered Gumby like giants when he built the Ark.

We arrived in Frankfurt late and had 15 minutes to begin boarding. What a circus. First some smart aleck crew member said we had better start running. Now we can walk pretty well but it was a rapid walk around the concourse. I would say at least a mile. We then had to catch a train back to the point of beginning and then another security check and more walking. We managed to board on a much smaller Lufthansa plane which required us to take a bus to it as it did not merit a jet way.

We are currently Russia bound and flying over Poland and Belarus to reach Moscow. Peggy says there is land down there which is good as we flew over the Atlantic pond earlier. It was interesting watching the progress on the electronic map while flying over England. We kind of did a reverse flight path from that which the Luftwaffe used in WWII. Crossing over Deal, the Roberts part of the family point of origin, and Dunkirk were attention getting.

We just need to land and go through customs and have our Russian Visas checked one more time (at least four checks so far today) and then find the bus to take us to the boat harbored on the Moscow River. It will be a good 24 hours elapsed time from leaving our home. Hopefully the luggage will make it but we always try to carry on a couple days of reserves. If things go well, we will have a nice dinner and collapse.

It was an hour and a half bus ride on the Moscow Ring Road to the ship. The big concern was if the dining room would be open. We enjoyed the Beef Stroganoff and the Filet and a glass or two of wine. Also enjoyed the company of the British ladies Alison, Monica and Susan that are pictured. We are currently getting our introduction and some basics out of the way before the cruise begins. 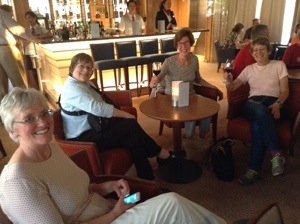