Our Chinese guides told us that Chinese airports are crowded. The Shanghai airport was almost a ghost town compared to LAX or SFO. The security people outnumbered the passengers. Given the tragedy off Vietnam, we were quite happy to have plenty of safety measures. They take your checked luggage and call you if they find something suspicious. One of our friends was called to explain her Panda shaped refrigerator magnets. Amazingly enough, Peggy set off no extra measures.

The airport experience was pretty easy given the recent events. Viking supplied us with a box lunch to supplement the East China Airline meal. The Chinese guy next to me ate his egg plant surprise as did I. I did watch him sample and spit out the pickled beans. I tried but refrained from spitting it out. The box lunch included sandwiches. Trust me the Chinese will not challenge the American Poor Boy anytime soon.

Landed in Wuhan a little after noon and drove endlessly through the streets of this 10 million person town. Cairo still stands out as traffic nightmare number one. Wuhan is a close second place. We enjoyed a lecture from our Wuhan guide while Peter slept. We learned that Wuhan was one of Mao’s favorite place as well as the origin of Sun Yat-sens 1911 rebellion that led to the overthrow of the Manchu dynasty – remember The Last Emperor? We finally reached the provincial museum.

Inside this massive venue we found the Chinese King Tut. This is my term. In 1978 a building excavation found an untouched tomb of a Chinese marquis. Marquis Yi of Zeng ruled in this area around 400 BC during an era the Chinese refer to as the Warring States Period (475-221 BC) before the unification of China under the Qin dynasty in 221.

The tomb included the Marquis and his 21 sacrificed companions. More importantly was the fabulous collection of bronzes. I have seen pictures of these wonderful works. The real thing was much better. Perhaps even better that the bronze-ware was the Marquis’ entertainment system for the tomb. There were 65 bronze bells capable of playing 122 tones.

When we arrived we saw a performance of these instruments by musicians dressed in historic costumes from 400 BC. It was not made very clear that the musicians were playing replicas. I kept waiting for one of “artifacts” to split. The originals were safely exhibited in the exhibition hall. To hear a concert with music from 2400 years ago was truly amazing.

We finally reached our river boat, the Viking Emerald around 4PM. Kite flying on the beach and a dragon to greet us. Much nicer and larger rooms than we usually have on Holland America. We will do a picture tour later. Great meals and better than normal house wine. It was time for bed as we headed up the Yangtze River.

Sorry the pictures are chronological but lacking narrative. You can probably figure it out. This blog will have to wait a few days post as the Internet connection on the river boat is minimal. 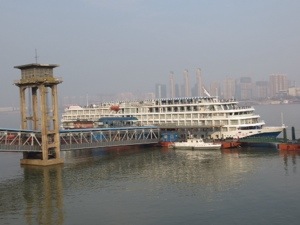 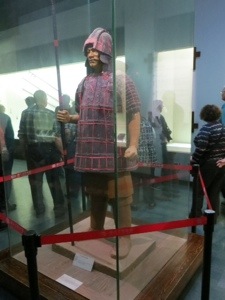 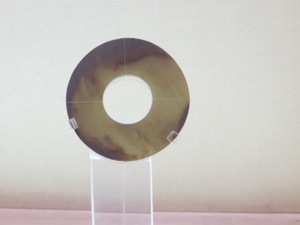