We finished our mega tourist day last evening with a flaming entree designed for tourists. It was a busy day and we were determined to spend today doing a more authentic Turkish day. I think we succeeded.

We took a cab to the old Byzantine Chora Church which today is a museum. The church lies near the remaining sections of the old city walls. The church itself was rebuilt a number of times. In the 1300’s a wealthy advisor to the Emperor of Constantinople committed funds and energy to remodeling the place. The mosaics are an essay in Byzantine Orthodox theology. Key distinctions between the Eastern and Western versions of Christian Art is that the Passion of Jesus is down played while the central importance of Mary is magnified. Scholars believe this is an adjustment to long connection with Eastern fertility goddesses. I have a neighbor who would endorse this view. The mosaics and setting were wonderful and well preserved after they were white washed when the church became a mosque. The works were rediscovered in the 1940s and the place is know a museum. The only obvious damage from Islamic use were the battered angel sculptures. White wash would not hide them.
This was the last sight of the day that there were bunches of tourists until we finally r,reached the Spice Market which was full of everybody. 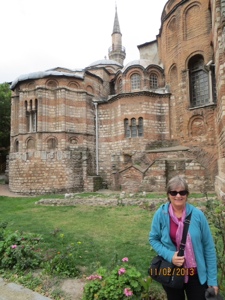 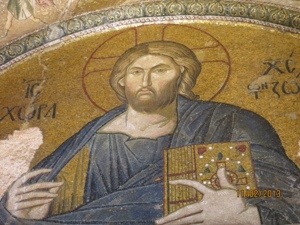 That is me climbing the bannister free stairs on the old city walls. On reaching the top, I sat and let Peggy explore the railing free top which is real high above the streets below. It is real easy to see why no including the conquering Turks made it though or over these walls. The soldiers of Mehmet the Conqueror did a surprise attack on the low sea walls that line the Golden Horn. 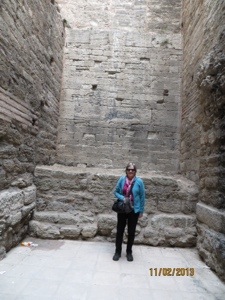 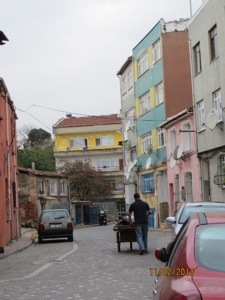 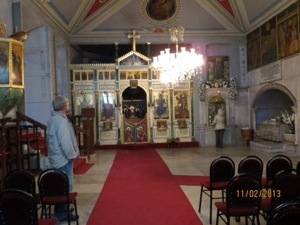 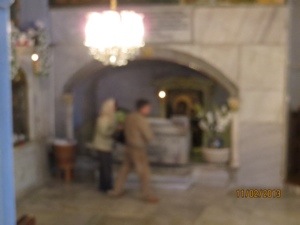 We walked along the old wall at ground level. We walked by the restoration efforts on the last Byzantine Palace. Through an opening we spotted a bird show. Pigeons were being offered for sale and consumption. They were on the wing as well as were the bags of stuff to feed them. No tourists in sight. Continued to the Holy Spring of Mary that is surrounded by very loud Mosques. We did not help ourselves to the Holy Water but we bought a small ornament. Around the corner was a small shop with ceramic crafts. The artisan was there, Ishmael was his name. He spoke English well and we had quite a discussion about families and the history of Istanbul. We purchased some charming reproductions that are light enough to bring home and place in the wine cellar. Enough said for now.i am holding his prize 3000 year old pot that Peggy almost made me drop. 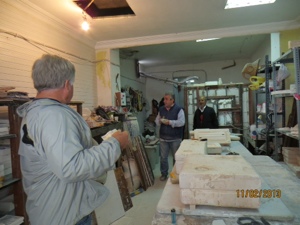 We walked along the Golden Horn waterfront and through the Balat and Fener neighborhoods. We found ourselves in the middle of everyday Istanbul folks buying and selling, gossiping and playing backgammon. Really enjoyed the potato truck that announced his presence like an ice cream truck in the states. It was the real deal. Looked normal folks to me. I even am getting used to the black scarves kind of.

We returned to the hotel and unloaded before heading back to the streets. Had a pretzel for a snack and observed Turkish cat protocol. People actually feed the street cats as if they are common property. People carry a bag of cat food and give it to the local felines. Sometimes they leave out piles of old sardines for the gourmets. The cats seem to be fine with this situation. We know one who would not. 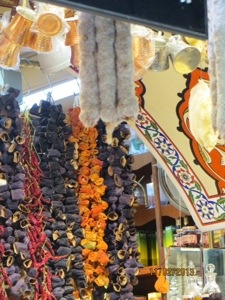 Headed into the Spice Market which today sells lots of tourist stuff. But surrounding the market itself are the stores and vendors selling to everyday Turks. Everyone seemed to carrying bags of purchases. This makes for plenty of bumps given the crowds. We managed to get used to it. Our money is safely tucked away in the meantime. Actually bought a few things. Did not buy the grape leaf roller and stuffer gizmo although we were tempted. We also did not buy Happy Cat brand food or any of the medicinal leeches in the 5 gallon jugs. They would have made great presents. 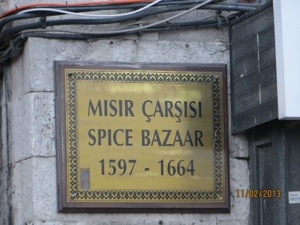 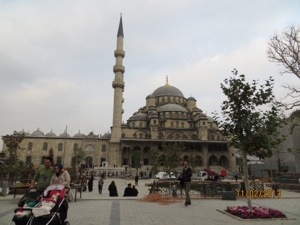 Stopped for a late lunch for a pita and cheese thing that was baked for us while we waited. Just right and the cooks posed for us. We just made it to the Orient Express Museum at the train station. It closed but we got the pictures as the lights went out. So almost ends the day. The Muezzin is crying out the evening prayer announcement. That is our cue for dinner. 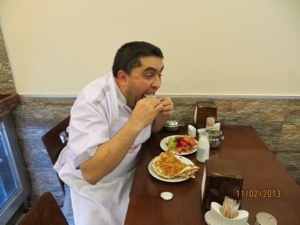 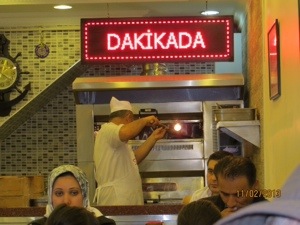 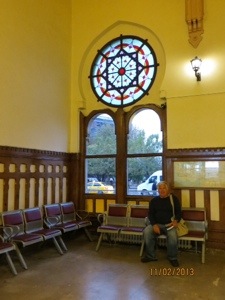 2 thoughts on “Istanbul – The Real Deal”