The Olympics at Last

Finally made it to the Olympics. We needed to land in Katacolon (cat gut?) and then make our way inland. Leaving the ship on a tender was actually easy today as they decided to take us early risers without waiting for the girls who normally control the process.. Found the 10Euro RT bus to Olympia and we were on our way. Covered the 30-40 km to the sacred venue and were there by 9. We had plenty of company as there were a number of giant cruise ships in port and this is the only destination besides the trinket shops in port.

Paid our entry fee and walked past the hill where Zeus avoided being a snack for his dad, Chronos. Suddenly it was not difficult to imagine being there over 2.000 years ago. You walk through the Altis, or sacred olive grove next to the Gymnasium where the athletes trained in preparation for the games that were held every four years. The area is surrounded by stoa and across from the Prytaneion which held the sacred flame that was never extinguished. It was not burning today as it has been out since the mid-5th Century when it was put out by the Christian Emperor Theodosis. Guess it was necessary as the Zeus altar was thought to be close by where animals were sacrificed at the beginning of the games.

By this time we were joined by almost countless tour groups. Fortunately the site is large enough to absorb the crowds without destroying the experience. The circular temple near Zeus was built by Phillip of Macedonia to commemorate his victory over the Greek confederation. Somewhat strange to have an in your face building by Alexander’s dad. But then the London Olympics did not hide Nelson’s statue on Trafalger Square. You then walk past the oldest temple on the site dedicated to Zeus’ much ignored wife Hera. The Doric columns where still impressive. We then saw the rather unimpressive stones where the modern Olympic torch is ignited every two years. The fountains and statue bases for Roman notables were empty as were the treasury buildings where cult assets were housed.

Evidently the Olympics have always had challenges with athlete behavior. Leading to the stadium entrance are sixteen statue bases for bronze statues of Zeus paid for by fines on cheaters. Evidently it was common practice to try blood doping by drinking bull blood before competition – Red Bull? Their blood was tested by official urine tasters. Yuck. Their names and families names are inscribed under the statues. Could not read the names. How many would they need today?

You enter the stadium through a tunnel called the crypt. It was exactly the same as a modern stadium except there are no seats for the 45,000 fans. They get a grassy slope and the only seats are for judges. We walked between the starting and finish lines. I understand that the shot put competition was held here in 2004. We continued our walk past the Villa that Nero built when he competed. Despite falling out of his chariot, he won.

The most impressive ruined temple was for Zeus. One column has been restored. It was destroyed by an earthquake in the 6th Century but the column sections still lie like toppled checkers. The statue of Zeus is long gone and was done on site by Phideas the master sculpted of the late classical age. At the east entrance to the temple is the marble tall pyramidal base which held the the statue of victory now housed in the on site museum. This Nike has no wings like the one from Samothrace.

In addition to the places for competition there are places for the offices of the judges and officials. Could not find the media outlets but the five star hotel called the Leonidaion was still there as were Phideas’ workshops and the place where the athletes took their oath of fair competition. Little was missing except for fast food and beverage stands. The most complete venue was the Palaestra where guys (there were no girls) trained and took baths after sweating a while.

The site was buried by sediment in the early Middle Ages and saved for future archeologists who have steadily been working the site since the mid-18th Century. It was amazing to quote Huell Hauser. The Archeological Museum contained actually statuary from the temples. It was nice to see such wonderful works so close to their original placement.

Managed to find our bus back home after wandering through bus lots for a half hour. Back in Katacolon port by 1 and had a beer and gelato. Not the greatest combination but seemed like the right thing to do. Wandered the trinket stores and got back to the ship. Formal dinner night. Peggy is prepping. I am working on some Greek vintage. We are sailing south along the western Side of the Peloponnesian peninsula. Seas are calm and November is almost here. 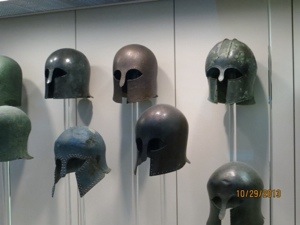 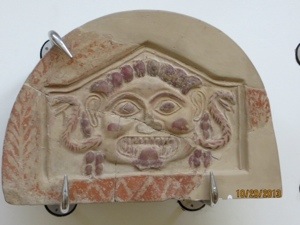 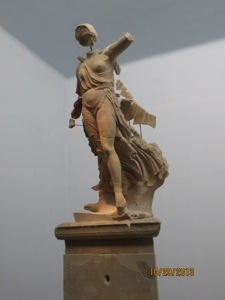 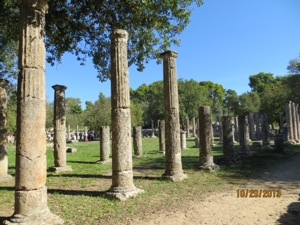 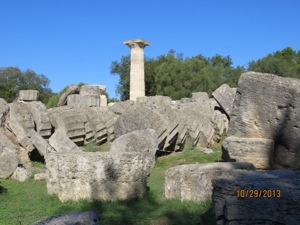 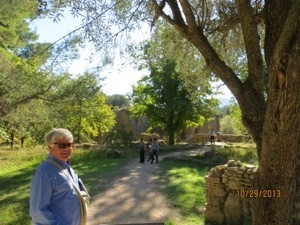 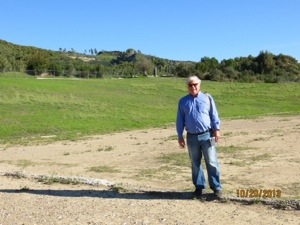 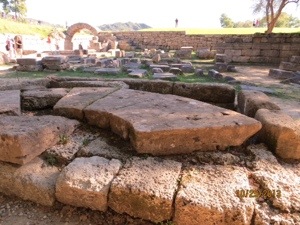 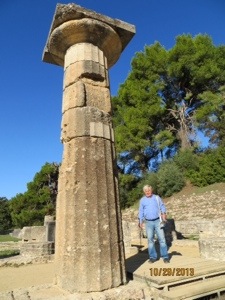 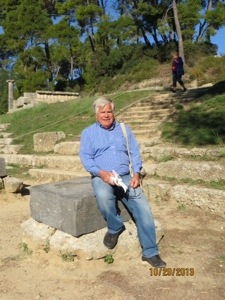 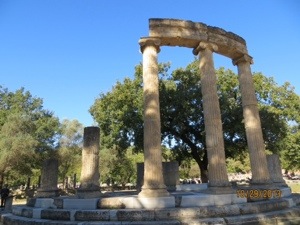 2 thoughts on “The Olympics at Last”