Now I know why they make 32 GB memory cards. They are designed for places like Dubrovnik. Not sure how many we took today but probably not enough. But before we get started on our first Croatian stop, we should take a moment and finish our stop in Civitavecchia and our trip around the heel and toe of Italy. These photos should be at the beginning or the end. Included is the strange oversized statue of the famous Times Square kiss at the end of WWII. Next we have the little tug that could and a couple pictures of the Italian toe as we headed for the Adriatic.

On to Croatia or more accurately, the former Republic of Dubrovnik. The city goes back to before the Greeks but attained great power status briefly in the 15th Century as a rival to the Republic of Venice, its neighbor to the west. Located on the Dalmatian Coast, it is today part of the nation of Croatia. It’s journey to achieve this status was long and tortuous. The key to its long independence and importance was its naval strength and its fortifications. It’s affiliation with Croatia is largely due ethnicity and Its Roman Catholicism. As the former Yugoslavia blew apart in the last two decades of the 20th Century, Dubrovnik became the southern tip of Croatia. On the other side of the coastal range lies Serbia, Bosnia, and Montenegro. These non-Catholic regions of the former Yugoslavia coveted the wealthy beach front property of the Dalmatian Coast. Dubrovnik underwent a long sieges by Serbians and Montenegrins in 1991. They are good at surviving sieges from the likes of the Venetians and Turks. The walls are the story.

The first thing upon arrival was a visit to an ATM to get some currency that works in the Republika Hrvatska or Croatia. We then entered the Pile Gate and purchased or wall walk tickets. Imagine spending $15 to climb a few hundred stairs and walk 2 km along stone walls. It was well worth the expense. The wall encompasses the entire old city in its embrace. What would take 30 minutes to hike is a good two hour photo binge. Towards the sea or towards the inner city, the stops for pictures are unavoidable. I am uploading just a few.

Much of the old city was heavily damaged by artillery and mortar fire from Napoleon’s old fort on the mountain overlooking the old city. You have to look closely to see any damage although almost all of the buildings have new roofs as a result of the bombardment. We were fortunate to walk the wall early as cruise ships and buses disgorged a veritable flood of wall walkers by 11 AM. It was also warming up and we descended into the relative cool of the city.

The city was destroyed by earthquakes in the 1700s. Few Renaissance era buildings survived and most of the churches were reconstructed in a somewhat clumsy Baroque style. This included the Cathedral that was originally funded by Richard the Lion Heart as he was rescued by the locals after a ship wreck on a local island. One of the few buildings to survive the earthquake in tact was the residence of the Rector the ruler of the Republic of Dubrovnik. His tenure was one month at which time he was replaced by another member of the prominent citizens. The position was equivalent to the Venetian Doge. The short term in office helped limit opportunity for corruption and getting too comfortable with elective office. We peeked inside the residence which had a large door knocker to wake him up if needed.

We proceeded to walk the streets and check out vendors and shops. Some nice tablecloths but none that really struck us as belonging in our home. We did find out that street vendors will take half off their asking price. Had a beer and uploaded a blog and then had a not so great as the Italian gelato.

Rather than taking the white knuckle cable car ride up to the top of the mountain, we settled for the “Panoramic” boat ride. Good choice. Delightful cruise in front of the city walls and then around a beautiful island used by sunbathers ( including the nude fisherman that Peggy took a picture of. Peggy now Insists that she did realize his natural state) and swimmers. The blue water speaks for itself. We are both ready to return to here or somewhere on the eastern Adriatic Coast. 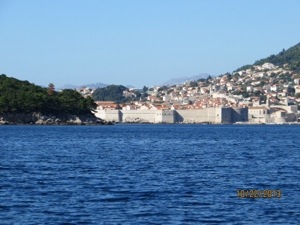 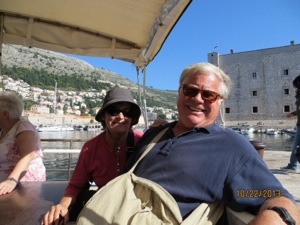 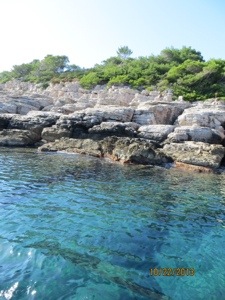 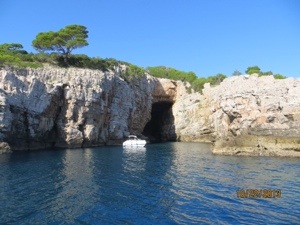 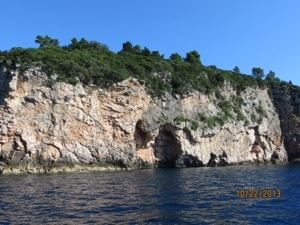 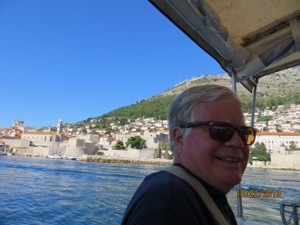 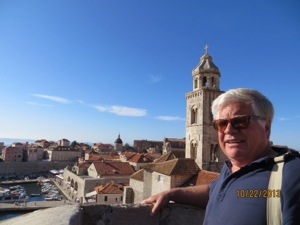 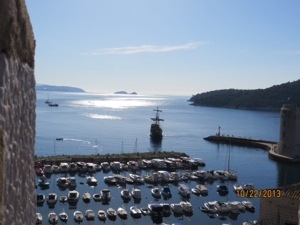 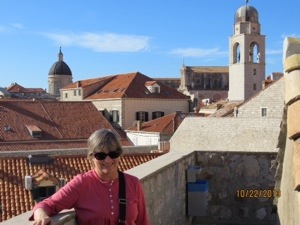 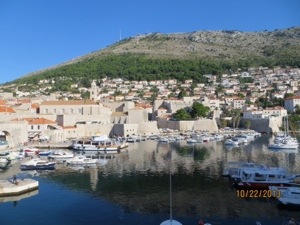 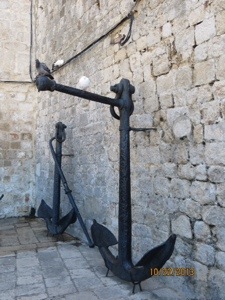 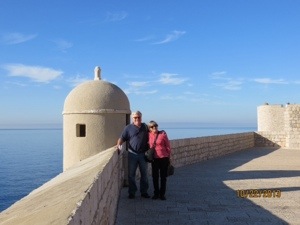 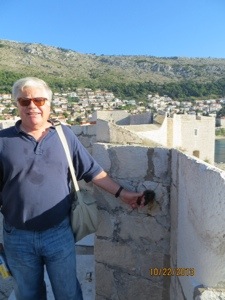 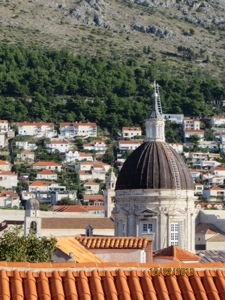 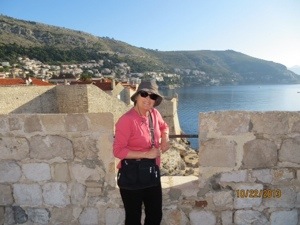 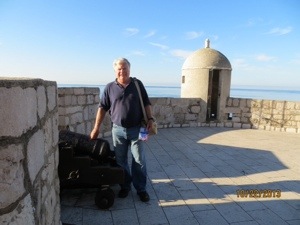 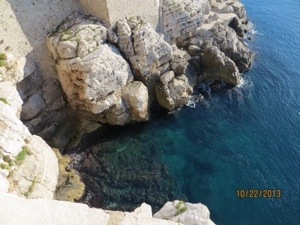 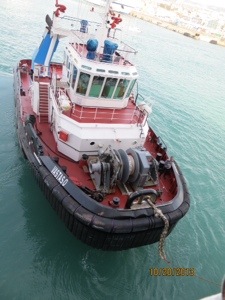 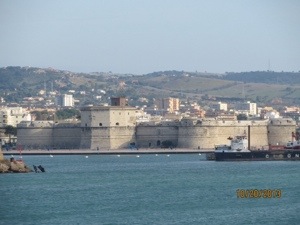