In the early 14th Century, an Italian pirate-adventurer named Grimaldi managed to seize control of a fortified rocky promontory overlooking the Mediterranean. He began predations on passing travelers. The same family is still there and continues the family enterprise.

Today the Principality of Monaco’s two square miles of territory is an urban jungle. Albeit a nice one. Perched around the original fort, the high rises cling to the hillside over the harbor. The place has its charm in a sunny but lifeless way. Most surely the residents enjoy their high density life style cocooned in their masonry perches. After all there a few spots of vegetation and a bunker for their vehicles. There is little street crime and no one asks where they got theirs. My observation is that most residents fit right into the Grimaldi pattern of being squeaky clean and manicured scoundrels. Actually it was pleasant day.

We walked into town along the Quai and climbed a ramp up to the palace and museums. We were surprised to find a couple camping rough on an overlook. I thought they would have been rousted early in the morning. The next encounter was with the nattily uniformed palace guards that protected the current Grimaldi’s. Nice cannon pictures. The artillery has not been up dated in the last two hundred years. The prince’s rely on guile and good fortune to maintain their hold on this alcove.

The grounds are limited by the sea but the gardens are nice. The numerous public restrooms are somewhat unique in southern Europe. They do make provision for the needs of visitor prey. The gardens are nice and are part of the effort to convince the visitor that the world would be an environmental disaster without the Grimaldi’s. Prince Albert I pioneered ecology in the late 19th Century and the cute pollinator hotel is certainly convincing proof of the regime’s intentions.

Princess Grace (AKA Grace Kelly for those who have never watched celebrity TV) lies buried close to the alter in the cathedral with many of the lesser Grimaldi’s. The cathedral is well scrubbed and pretty average. There are no drippy votive candles or flyers asking for donations. The place fits the family image.

The family cemented its green reputation with its support of their oceanographic director Jacque Cousteau. This move of public relations genius continues to pay dividends despite the obvious contempt for the environment displayed by Grimaldi building projects that cover the hills. I do wonder where in France the sewage is treated as obviously there is not an inch of open space for such a disgusting activity. Nonetheless, I enjoyed posing in front of the original Yellow Submarine located at the entrance to the Aquarium.

The Aquarium was a nice diversion from the subtle propaganda that bombards you at every step. The displays are educational and well done. Without the information provided I would have no idea that without the Grimaldi’s support that oceans would be lifeless. Peggy had a great time capturing the faces of many cute fish and the ugly snout of an eel. The most enjoyable part um was watching little kids following the fish in the tanks. The experience was nice but compared to the Monterey Aquarium, it wasn’t much. Peggy asked with all their money why the family did not expand the aquarium. It appeared that doing a landfill and building condos at the base of the aquarium pays better than fish.

Overpaid for coffee and a snack to use WiFi. Did enjoy using the time to people watch. Tourists in the squeaky clean souvenir marketplace seem to quickly adopt the aloof and critical attitudes of full time residents. Fun nonetheless.

Did the palace tour. We were provided a complimentary audio guide. Free is an unusual practice for these things in museums. We soon understood why. The narrative convinced us that the Grimaldi’s are in the same league as the Bourbons and Hapsburgs. Without getting too far into the history, let it be said that the family are great name droppers. An English duke died in a room so it is named after him. A French king is a godfather of a Grimaldi and gets a room named after him. The vase that the last king of Egypt gave to the Grimaldi’s is featured in the narrative. They leave out the fact that Farouk was an obese and corrupt refugee spending the loot that he stole from the Egyptian people. The Grimaldi’s kind of person.

The palace tour drags through rooms of reproductions and mediocre art. The overblown throne room is hilarious. The throne for this midget domain mirrors those of the real kings of Europe. You quickly realize that the family survival was based on the obscurity of their holdings and their talent for attaching themselves in a tangential way to the rulers of France. After all the enclave was surrounded by Italian countryside for most of its history. The Grimaldi land escaped the attention of the rest of the world while Italy and France were doing land swaps in the 19th Century.

The Grimaldi that was inspired to build the Casino had perfect timing. The Riviera was under development in Nice. The revenue from the Casino was sufficient to meet the modest financial needs of the principality and the idea of tax exemption for the rich provided sufficient connections to protect its independence through the 20th Century. It’s ecological halo is its current screen to protect the riches that shelter there.

The final insult to the visitor’s intellect is trying to convince you that the entire family are secular saints. The current daughters are portrayed as being close to the ideals of Mother Teresa despite their tabloid notoriety. On the whole, the impression is numerous and sad.

Enjoyed the views and rubbing shoulders with the comfortable but strangely bleak surroundings. I was glad to get back on board our middle class yacht. We took pictures of the casino from the boat. That was as close as I needed to be. 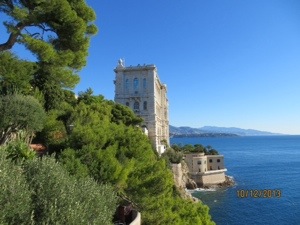 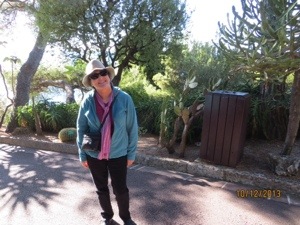 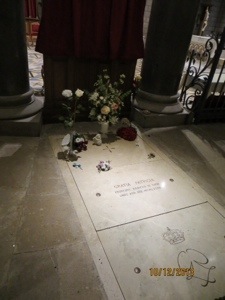 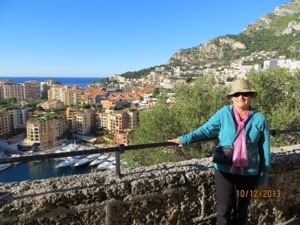 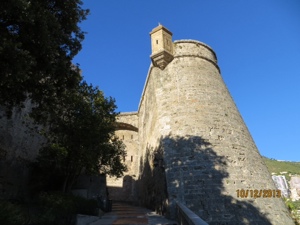 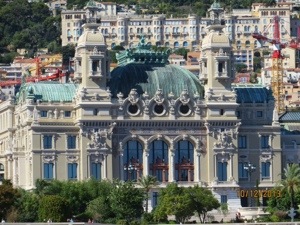