A Glimpse of Heaven

This might be short and sweet as we have just spent an ecumenical and international evening with a collection of Europeans sampling and consuming more alcohol than we should. It was fun . The Dread Girl Stephanie from Austria, another gal form Austria and Josephine from the Netherlands managed to solve most of the world’s problems over quite a number of beers, Spanish grappa and wine.

Anyway, back to the beginning of the day. We woke to no rain and had a quick breakfast in O Cebreiro before hitting the Camino. The sky’s were overcast and suddenly turned foggy, much like San Francisco. Reached the statue of the pilgrim leaning into the wind and took a picture like everyone else. It was crowded for a moment. Walked on into the sun and stopped around 6 Kms out at a bar serving cafe. No Limon as it was cold. Joined by a crowd of 20 or so Russians from Moscow. It was crowded in the bar served by one gal.

We left and managed to get ahead of the rest or at least most of the rest. Suddenly we were in the sun and it was wonderful. The rest of the hike was somewhat magical,or as Peggy described it as being a glimpse of Heaven. It was stunning. The pictures tell it all.

The song birds normally are tough to see. Today they were in front and around us as we walked down a gentle trail. The views were astounding. It was delightful.

We finally came back into civilization with a couple of villages where we followed cows after their noon milking. We needed to adjust our pace to the rhythms of Spain. Worked out fine. Had lunch near our destination of Triacastela or three castles of which there are none today. All destroyed by Vikings in 968. No matter, we reached the town and checked in to our Casa Rural.

Went exploring around five and got no more than a hundred yards when we recognized Dread Girl. Joined she and her friend and ordered beers, that started a three or four hour discussion about life, the Camino and politics. Joined for a while by the old French guys who did their French kiss deal. I still do the hand shake. Great evening with too many drinks to elaborate.

We have six more days of walking. It has been great.

We did encounter Larry Kossak’s brother. 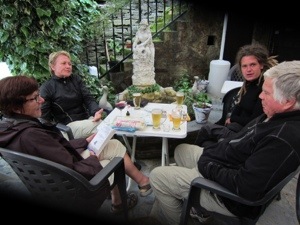 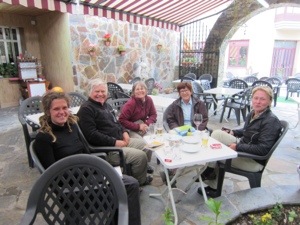 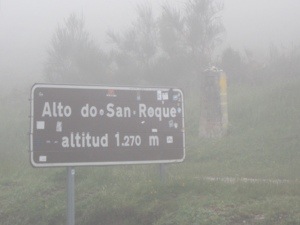 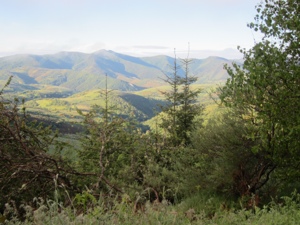 3 thoughts on “A Glimpse of Heaven”