We faced a relatively flat and short stage of around 18 Kms. We had thoroughly enjoyed ourselves last night. Our host Javier was the definition of graciousness. Eating dinner in his 300 year old dining-museum room didn’t hurt. 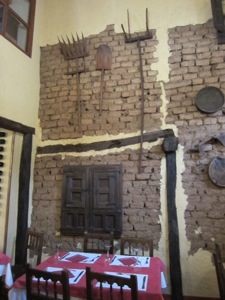 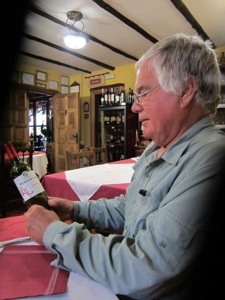 Peggy got a last chance to catch the stork children while I evaluated the local vintages. The emblem is the hand and saddle from the town of Mules.

We were out the door and on the road by 8 and headed west through a strangely named Villamoros even though no Moors have lived there for at least 600 years thanks to the Inquisition. There was a bunch of activity on the road by the time we reached Villarente about 6 Kms from our start. Got a shot of espresso so Peggy could use the facilities. Usual suspects were there. There were portapotties all over the place. We thought they were from Saturday night. After all what could happen on a Sunday?

We climbed into the town of Arcahueja while Civil Guardias were patrolling the Camino. First time for that. In the town were Ambulences and guys with brown cloaks and medallions festooning their outfits. Still no idea of what was happening. The relative silence disappeared as the sounds of bands and drums got louder as we approached the next village of Valdefuente. Suddenly the Camino filled with these guys holding these monster flags on 20 some foot poles emerged onto the Camino.

We were in the middle of the semi-annual movement of the Virgen del Camino statue that goes back and forth between Valdefresno and Villaturiel. The statue is accompanied by several thousand folks carry gigantic flags representing their respective Hermandad or Brotherhood. The bands and women in costume playing their castanets were quite a sight and sound. No 76 trombones but the recorders made up for it. Pilgrims who were fifteen minutes ahead of us saw nothing. Timing is everything.

Wandered through the traffic crossings and sidewalks of the large city of Leon. We were ready to stop by the time we reached the Cathedral. I insisted that we go to the Parador and check in so we could get rid of the packs. The Parador was another 1 km but the shower was worth it. By the time we made it back to the Cathedral the festival was fully underway. 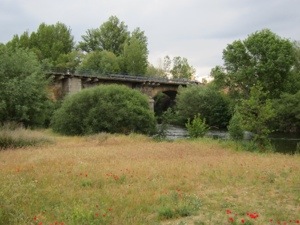 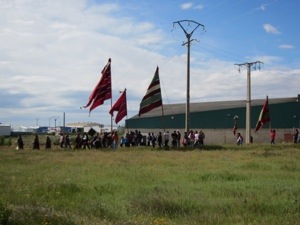 We sat down and had a Hamburguesa with Fries and a beer. A collection of rather un frightening Roman Legionnaires marched passed. They had to stop about every fifty yards to rest and adjust their shields. Cute. We then proceeded into the festival melee. It was nice that they were no longer setting off large fireworks every minute or so. The festival must have had something to do with the Romans since vendors and celebrants were in Roman outfits and togas. Quite a sight. The regional products were fun to see. These markets are really good since us pilgrims don’t want to buy and then carry. Saw a mock gladiator fight between two guys who needed to see the weight room. Still charming in a carny way. The barbecue place looked great but we had just eaten. We did do Roman gelato.

Finally got to the Cathedral. The place was built in something like six decades which is unusual for these projects which usually take more than a century to complete. It is known for its stained glass. Only Chartres has more. Unfortunately, the restoration scaffolding blocked clear views. What was the most amazing was that when the Cathedral was built, the entire population of Leon was around 5000. Imagine Sonora completing a project like that? We toured the cloisters and staggered back to the hotel.

The Parador was originally a pilgrim hospice. The king of Castile wanted the best. Today we got the best. I am writing this screed where pilgrims bunked. Peggy is wandering around taking pictures so we may add some to maintain a semblance of continuity. 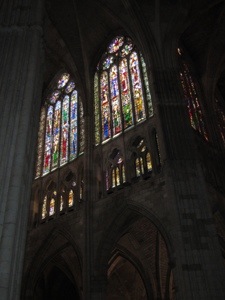 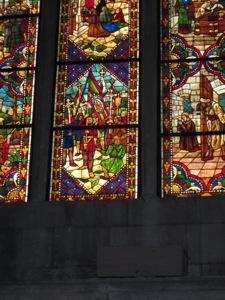 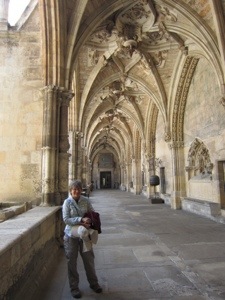 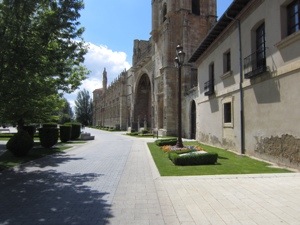 4 thoughts on “Parades and Pagentry”