Arrived in Barcelonne du Gers after a quick four hour, 18 km walk. Nasty mud in spots but plenty of road walking made for an easy passage. The sky’s were overcast after raining almost all last night. It appears that we may be for more rain tonight. The countryside is full of wheat and vines and fields of planted sunflowers that have not germinated. It is also very flat. The local people insist that the weather is one month behind schedule. It should be in the eighties rather than the fifties. It is great for hiking. Stopped only one for an apple and chocolate break at a Camino angel stop.

Most French are on vacation this week so we have plenty of company on the trail and in the Gites. Last night was particularly entertaining during our three hour dinner and aperitif time. Almost everyone at the Gite, except for the burro lady and us were on vacation for the week. They will leave the trail at the end of the weekend and the Camino will empty out a bit until we get near Spain.

The French do not waste food. They are the originators of the clean plate club. One key tool in this effort is bread. It is served to act as a versatile tool for cleaning your plate and providing a space to spread cheese and other goodies. Last night we had Foix Gras pâté for which the bread provides a portable and eatable surface. Fromage also is a primary recipient of the bread medium. It does not appear to ever be used alone. Even in the morning, bread is where the butter and jam go. No one eats bread alone.

Of course bread comes in a huge selection of sizes and shapes. They even have sliced, foam bread in the supermarkets. We have not been served such. Usually the baguette is the shape of choice. Bigger and fatter loaves are common. Cutting the giant peasant loaves can be a bit of a trick. But we manage.

The same lady provided a amusing discussion for a couple of hours. She was a long time fan of American westerns and particularly John Wayne. On her tour she had been to Monument Valley and she loved the Indian Skywalk over the Grand Canyon. She got a speeding ticket in LA and fell in love with San Francisco. She and other broke into I left my heart in San Francisco. Eventually I had to sing a few bars from the Beach Boys. She had been to Yosemite and had flown to Colorado in time to see the Batman movie in Aurora. She was there in time to witness our particular American madness.

I had no explanation for the gun crazies and they seemed to understand that not all Americans are nuts. At least I hope so. They did ask me what I thought about the French. Peggy and I both used the term kind and they seemed to really appreciate that observation. We mostly avoided politics and focused on movies. I explained that French cinema was too intellectual for me and that I preferred Clint Eastwood violence. Made sense to them. They loved the Columbia pictures and could rattle off Gary Cooper faster than I.

The burro lady. Spoke English since she spent three years in Nigeria with her irrigation engineer husband. Interesting that the husband was not with her. Don’t think I would be either. She loves the burro even though it won’t readily cross bridges and needs to pushed through water. The burro doesn’t seem to enjoy the rain. Notice the tent for the burro lady. Also see a picture of our warm and dry room. She is on her way to Santiago. Should see more of them both.

People seem to know about the Americans before we arrive. Since they know we started in Le Puy and intend to walk to Santiago, their usual comment is “Superb” or “Magnificent”. They cut us a lot of slack.

I could not upload last night since there was no wifi connection. The Gite that we are at advertised wifi but no deal. Instead they have a Internet connected computer with a French keyboard. That is the kiss of death. Passwords get messed up. So instead you wander around town looking for a wifi hotspot. Bars and Tabac stores are good places to look. Found one earlier and I will stroll over again in a few minutes to be back in sync.

We have another week to walk across the Basque region of France. We then go for crossing the Pyrenees. We are thinking about changing our plane tickets to give us a little more time to complete the walk by heading to Finestere on the Atlantic. Much symbolism and highly recommended. Only another 90 Kms. We will probably wait until Pamplona to decide. That could mean a few more good eating days for Goldie. 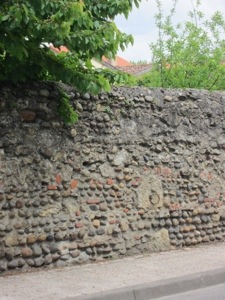 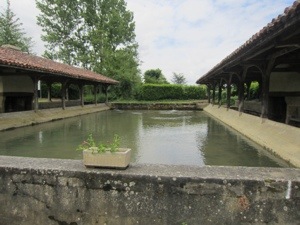 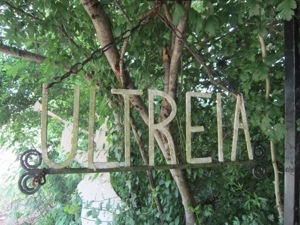 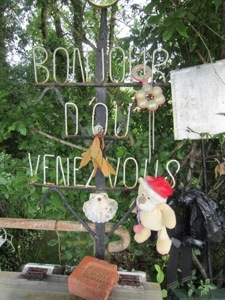 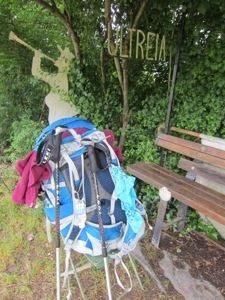 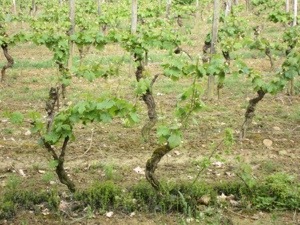 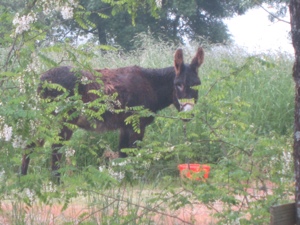 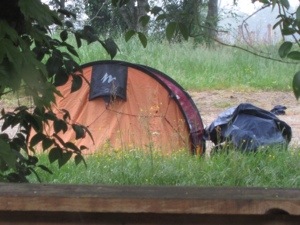 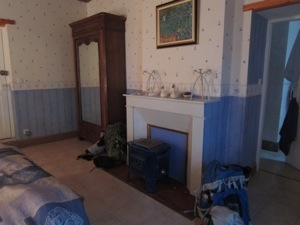