Things started our all right. The sun was shinning and not too hot. We had a nice breakfast and took a group picture before departing.

Actually headed out of town going downhill for a bit and then we hit a grassy slope with some our nemesis, the mud. Peggy is still nursing her ankle and a new blister. Slip and slide is hard. What is worse to realize that we had managed to walk only 5 km in three hours. I don’t know how we managed that but we did. All of a sudden it was 11:15 and we still had 19 km to go. Something little had slowed our pace.

Now we did catch up through mostly easy trails but with sections of the worst mud we have encountered. Real bogs. Other hikers had created detours around the swamps. Getting back to the actual rout involved some bush whacking. Not fun.

We reached the beautiful town of Lectoure about 1:45 and were beat and still had 9 km to go. Got a quiche from a Patisserie and sat on a stone in front of the church with a bunch of other hikers. We knew several and said our hellos.

We started again a little after 2 and headed downhill so we could go uphill. The downhill ended in another bog which needed navigating. We then headed uphill gradually on roads. The uphill stretched for several miles. Things finally leveled out and we saw a sign indicating that we had less than 2 km to go. It was 4.

We are in the heart of Gascony. Alexander Dumas best defined the Gascons as d’ Artagnan in the Three Musketeers. None like that have appeared just yet. The Gite has cactus and a swimming pool that we are too pooped to use. We have a room with only two beds and they will be used tonight with great relief. At least two of our acquaintances have checked in and there is a large group from a hiking club that also has appeared. We will see what the evening brings.

The planned hike tomorrow is only 20 km instead of 24 km. we hope the little things won’t create problems. 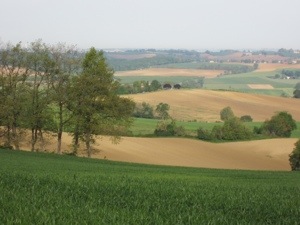 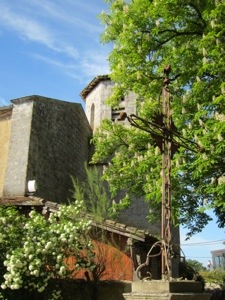 Important post script. Turns out that my watch had advanced an hour and a half. We were actually right on pace in the morning. We made our hike in less than seven hours which at 4 km per hour plus lunch is right on. Peggy may eventually forgive me for making an issue this morning. Still it is the little things that can mess you up.

2 thoughts on “The Little Things”