They say Eskimos have one hundred nouns to describe different kinds of snow and ice. Pilgrims have almost as many adjectives to describe mud. Most of them end in “y”. The focus of today’s blog will be on what we have learned about mud and walking in it.

But first let me describe our last Gite. The owner is a blacksmith. While friendly, he certainly has his own take on running a Gite. Most Gite proprietors take great pride in their cuisine. We almost always book with a Demi pension arrangement. We get a great dinner and Petit Dejeuner early in the morning before we hit the Camino. For instance, while we are staying in a converted cow stall in a barn, the owner asked us if we preferred Canard or Veau. While both have guilt attached, we chose veal. Back to last night.

The proprietor just asked us about side dishes and dessert preferences and then went to a closet and pulled out some supplies. The twelve guests then cooked their own common meal. Very unique. The charcuterie plate was good as was the carrot salad that he had prepared. We, I should say that others did the cooking, our sausage, lentils and pasta. It was actually pretty good but strange after getting gourmet meals on a consistent basis. He did have a five gallon box of decent local wine. It suffered some damage as the thirsty cooks attacked it. Also did our own dishes and pots. Peggy and I could help with that part. A new experience.

It started raining shortly after we got there and came down hard most of the night. We donned our rainwear and headed out. For an hour it was steady and then it started to lighten up. By ten we removed our parkas and trudged on. This is where the mud part comes in.

Mud is composed of dirt and water. The type of dirt and the length of time that it has been exposed to water decide its qualities. Today the mud seemed to be made of chalk and glue. It was like walking through Mason’s Clay. that is the stuff you use to make mortar sticky. Two or three miles of glue walking was no fun. Especially if the adjectives sticky, slimy, squishy, soggy, slippery, gopher guts, chicken innards, Deistal turkey spills, gooshy, splushy, mushy, squeamishly, snotty, greasy and kaopectaty are applied. A kilo on each boot is bad. Fortunately, there is a limit to what sticks on the boot at any one time. To remove some invites more.

You look for high ground so that if the worst happens and gravity drags you into a slime pond, you will have farther to travel. That is the theory. In practice, there is no high ground. All that looks dry is illusory and just waiting to ensnare the unwary. In these cases, I let Peggy lead figuring that if she is not sucked in, I will have a chance.

Today’s mud took the prize for difficulty in troding. Other mud presented challenges by being spread wider than the Missouri in Nebraska. Today we were confront with a narrow channel between fields of wheat with signs imploring pilgrims to stay in the mud. Mud between stone walls is worse because if you fall, it is concussion time. Mud with livestock additives is not pleasant either but seems to be relatively rare since poop is a desired commodity and not to be wasted on pilgrim boots.

Remembrances of reading about the trenches in WWI or the mud marches of the civil war were with me. Kept getting visions of mules vanishing in the mud as it looked like the same was happening to me.

When you get to a Gite or Chambre d’Hotes, the first thing they do is strip you of your hiking batons and boots. These stay in a cold antechamber until you leave. Sometimes they give you newspaper to wad and stuff in your sodden wear.

Since we reached our destination a little after noon with our 20 km done, we have had time to walk around Montjuc and check out the 12th Century Donjon. Fortunately, it was closed. Also had time to eat a leisurely lunch and buy a bottle of the local vintage to consume shortly after this is posted. Unfortunately, the heating in the barn common area is the same as it was in the Middle Ages except for the patio heater that is valiantly but unsuccessfully trying to warm my digits. 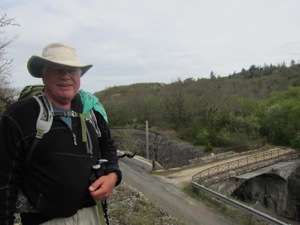 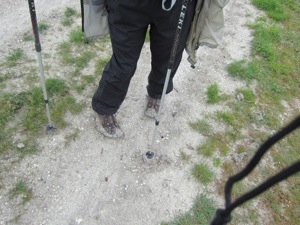 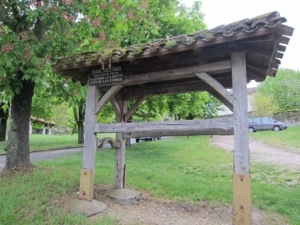 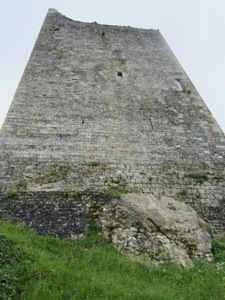 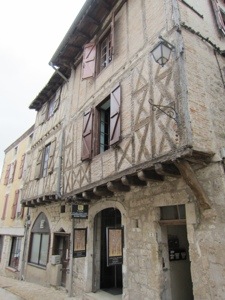 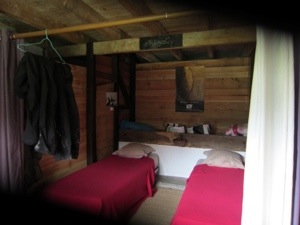 One last comment on French snails.they can tell that we are Americans. They do not slime away.

7 thoughts on “Science of Mud Walking”