Ever since those days at UCLA when I took a literature class in Cervantes, I have enjoyed and chuckled at the adventures of that elderly gentleman. As I approach his age, his behavior doesn’t seem all that unusual. Today we drove to La Mancha to seek out the noble knight’s home ground.

In Puerto Lapice there is an old 16th Century inn that literary historians have concluded to be the inspiration for the location of Don Quixote’s knighthood. The ceremony was performed by the inn keeper whom the Don had assumed to be The Lord of the castle. It was a perfect movie set and as real looking as you can imagine. We were there with two or three bus loads of Japanese tourists but they went to the dining rooms. We had the bar to ourselves with a couple of modern day mule skinners (truck drivers). Had our tapas, olives, bread and a beer standing at the bar like good Spaniards. 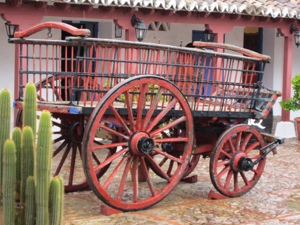 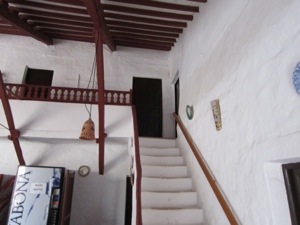 You can almost imagine the female help descending the stairs. 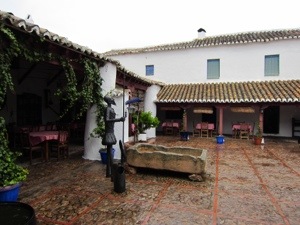 Went into the serious wine bodega. The giant clay jugs are actually full of the local vintage.

A few last pictures in the courtyard and at the front gate. 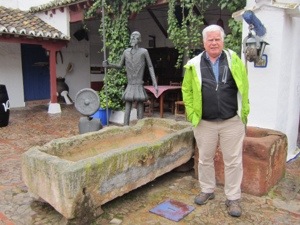 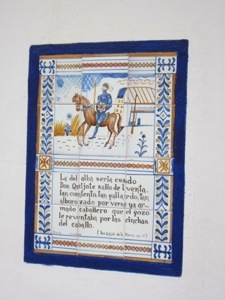 After lunch, we went looking for windmills and found the “Land of the Giants”. Lacking a horse and lance, we had to settle for climbing around in a mill with the original running gear. Great setting. 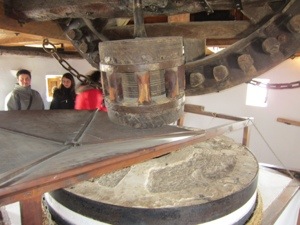 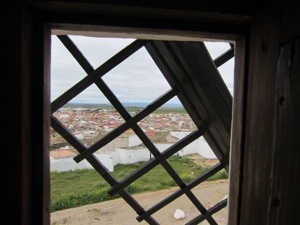 The wooden tail that Peggy is standing next to is used to rotate the entire top into the wind. The wooden frames are covered with canvas when in use. These mills are located in the town of Campo de Criptana. We had lost all the tour buses by now. Time to find El Toboso, the home of Dulcinea. It turns out that Cervantes had in mind an actual lady from that town. Off we went. Drove down a little road with any number of small estates that could have that of the ancient Don.

We arrived in El Toboso and found the town square with the statues of the beloved couple done in iron. Not overly romantic but cuter than the iron bull silhouettes festooning the highways. The town Dulcinea museum in “her” house was closed.

There was a small group of folks in the town listening to a professorial looking man. One of the gentlemen saw us reading the signs and acting curious. He was the town staff person for the tourist information office. This is a town of 2000 folks. He opened the office to show as a sizable collection of Don Quixote editions. I noticed that one edition was the translation by Walter Starkie, my professor at UCLA. I explained in my best pigeon Spanish about my professor and my appreciation for Cervantes.

As we were getting in our car to depart, our local host motioned for us to join the group who was going to see one of the group’s 16th Century house. We jumped at the chance. The first picture below is his house, then the courtyard and then the important bodega. We also saw the family oratorio but out of respect took no pictures. 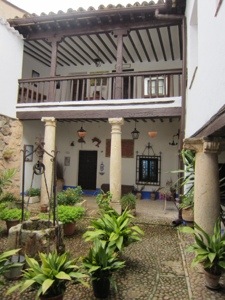 Happy day so happy joint portrait taken at close range. Also pictured are the two kittens who live outside our room in Consuegra. We are around an hour south of Toledo, our destination tomorrow. 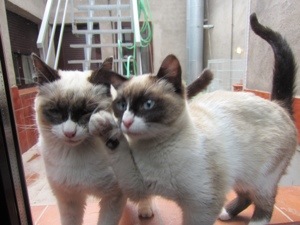