The Fifties and early Sixties were the Golden age of TV Westerns. In addition to Rawhide, Gunsmoke, and Bonanza, one my favorites was old Ward Bond in Wagon Train. The noble and not so were portrayed each week in glorious black and white. Samuel LaPorte is one of those characters worth tracing in his American journey.

Samuel was born in Cadiz, Ohio to his father, Abraham. In 1826 at the age of 20 he marries Nancy Mouder and moves with rest of the family to Rush Creek, Ohio in 1835. He and Nancy also manage to have 10 children by 1841. The next record reports that he is in Clay, Illinois marrying the 16 year old Lucinda Mary Maxwell in 1848. We have no records of a divorce but Nancy remains in Rush Creek until her death in 1856. Needless to say, Samuel is not mentioned in family Ohio records anymore.

Lucinda and Samuel move to Knox, Illinois in time for the 1850 federal census where he describes himself as a farmer with sons Philamon and Maxwell. Maxwell is listed as being one year old at the time and his place of birth is Iowa. His full name, probably shortened by the paid by piece work census taker, was Joseph Maxwell LaPorte. It appears that Samuel talked his father-in-law William Maxwell into taking care of his daughter and grandchildren while Samuel took off for a while. I wonder if Grandpa Maxwell believed if his son-in-law would return? But on the other hand, perhaps Sam didn’t look to bad as this was Lucinda’s second marriage which had resulted in little Philamon.

Samuel was on his way west in 1851 and managed to locate property in Oregon and return  to Illinois in 1852 for his family. We know from the Oregon Centennial History that they arrived in Foster, Oregon in August, 1853. Sam got around. Since I grew up on TV Westerns, I knew that these trips were more difficult than a cruise. In reality, few people could afford a big TV-style wagon. Most used wagons smaller than a sheet of plywood. The only folks that rode were women giving birth. Young Joseph was three or four. Editorial Note: It does give pleasure when stopping in one of the shrines dedicated to the hardy Mormon pioneers to calmly relate that my great-grandfather did the trip when he was a toddler. 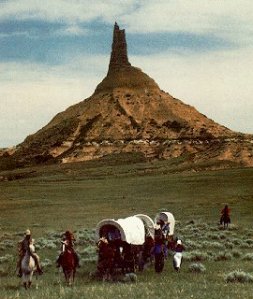 Samuel and his family move around Oregon on a search for their promised land. In 1856, their home near Vancouver (in the state of Washington) is burned by Yakima Indians in the wars of the time. The family moves down the Willamette valley and reaching Jackson County by 1860.

Jacksonville today is a restored Gold Rush era town near Medford, Oregon. Peggy and I spent several days there in 2010 researching the family.

In July 1860, Samuel paid in the “lawful money of the United States”  $1600 for 319.44 acres from Levi Rice and his wife Prudence. Today the land is within spitting distance of a WalMart on the highway to Medford. Joseph raises cattle and records his brand with the county, a conjoined SL. It appears from court records that Samuel became respectable to the point of serving on juries and suing one of the local lumber barons. The trial papers are in Salem and need to be located. The Farmer-Cattleman passes away in Jackson County in 1877 at the age of 72 but the family history in Oregon is just beginning.

7 thoughts on “Samuel, Pioneer and Rascal”