Said goodbye to Toledo a little after nine in the morning. Enjoyed an uneventful trip to the Madrid Airport. Choose the outside ring road. A little longer but less intense than venturing too close to the center of Madrid. Kind of like keeping your distance from the Sun. We just followed the little airport symbols all the way home. Deposited the car in its lot and said auvoir to our tiny black beauty.

We had a two hour wait for our plane. Entertained ourselves by moving away from people who yelled instead of talking and people who played loud video games. Had a typical airport type lunch. Unimaginative but better than starving since we were flying a budget British airline. We were the only ones on the plane with backpacks.

Arrived in Lyon on schedule. Lyon gets its name from the Lion Legion that was stationed here back in Roman times. Had to check our bag with the deadly walking sticks. Recovered same and hoofed it across the small airport with no jetways to the express tram into Lyon. Got lucky and boarded without missing a beat.

Thirty minutes to the train station. Cross the tracks and then try to figure out from which track our train will depart. They use a system like airports and do not tell you the departure gate until about 15 minutes from departure. Everyone stands and stares at the blue screen monitors waiting for the announcement. We were close and up the escalator.

Got on board with ten minutes to spare. We had first class tickets since we bought them in the US. Moved to not an appreciably much nicer carriage. Presently on our two hour ride to Le Puy-en-Velay where a short cab ride should get us to our hotel. That makes five different contrivances today. Maybe a new record for us. Tomorrow will be more interesting and certainly less filled with travel tension. 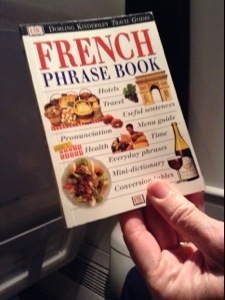 Finally got to Le Puy. Needed a taxi. That makes six forms of transport. Will add details later today.

The portrait is my best Clark W. Griswold pose. Picture from train and our new language.

One thought on “Plains, Trains and Automobiles”